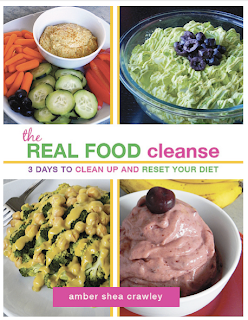 If you've been following my posts over the last couple of days, you know that I've been doing Chef Amber Shea's Real Food Cleanse, a three-day, mostly-raw, whole foods cleanse from an e-book titled The Real Food Cleanse (you can download it on Amber's blog for $14.99).

Now that I've finished day three, I can attest that this e-book is worth every penny (To be fair, I think I actually got mine for a promo price when it was first released, but I'd pay full price in a heartbeat). I started the cleanse to reset my eating habits after returning from Portland, where I stuffed every vegan doughnut, fake meat, cheese sauce, and fried food into my mouth that I could. I needed a reset button, and this cleanse was it! I feel great.

I've forgone processed foods, grains, alcohol, and sugar for the past three days. But that doesn't mean I've been starving. In fact, the portions on this cleanse are abundant, likely because the extra veggies make up for the lack of grains. And the food is simply delicious. Take today, for example.

I run on Tuesdays, Thursdays, and at least one weekend day, so today was a running day. That meant that I needed a pre-workout snack when I awoke this morning. It wasn't on the cleanse, but I had one of Amber's Cocoa Crunch Clusters from Practically Raw Desserts (I keep these in the freezer for quick pre-workout snacks). Technically, cocoa isn't allowed on the cleanse, but that's the one rule I decided to break from the get-go.

After my run, I sat down to this filling bowl of Blueberry-Banana Chia Pudding. 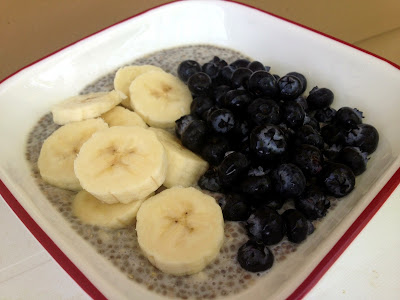 The chia seeds were soaked overnight in unsweetened almond milk (you can also use water, but I opted for milk) so they were all gelled up and doing that magical pudding trick that chia seeds do. And they're topped with bananas and blueberries. I also had a scoop of Vega One Vanilla Chai protein powder mixed with water to get some extra protein after my run (not on the cleanse, by the way).

This meal kept me full until about 11 a.m., my usual morning snack time. I brought some raw mini bell peppers to work, so I had about four of those.

And then lunchtime came. Glorious, glorious lunchtime. Guess what I got to eat for lunch? A whole freakin' avocado!! Not by itself, of course. But a whole avocado went into the dressing for this Caesar Salad with Chunky Olive Tapenade. 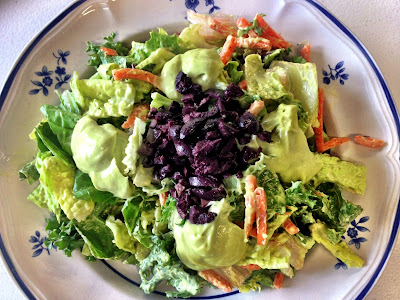 If you and I are Facebook friends, you might have noticed how happy this avocado dressing made me today. I rarely eat an entire avocado in one sitting. But I should do that more often. Too often, I get my fat in less healthy ways (French fries, anyone?). Whole avocados are the way to go.

My afternoon snack dessert may have topped the avocado on the awesome factor — Whipped Cherry Banana Freeze! 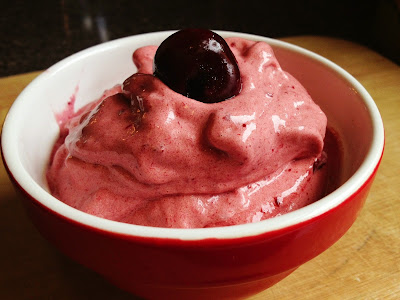 This is basically simple frozen banana soft serve but with frozen cherries mixed in! I always let too much time pass between instances of eating banana soft serve. I need to be eating this stuff everyday. By the way, here's an example of how generous the portions are on this cleanse. I cut the recipe in half, because I ate this shortly before dinner, and there was still a ton!

The grand cleanse finale may have been the best of all though because it combined my two favorite veggies with one of my favorite spices — Roasted Kale and Cauliflower with Curry Cream. 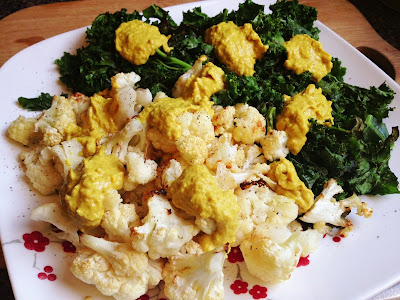 Both the kale and the cauliflower are roasted, so it's kind of like eating cauliflower popcorn and kale chips for dinner! And that's all topped with a spicy curry sauce. Oh, and check out the portion sizes here! Amber calls for an entire small head of cauliflower and one whole small bunch of kale. I could only find a large head and a large bunch though, so I used about 3/4th of the cauliflower and kale.

Now that the cleanse is over, I'm ready to start eating a little healthier. Of course, I'll add back in my beloved faux meats, but I'll try to limit those items to a couple times each week and stick with more whole sources of protein, like tofu, tempeh, homemade seitan, and beans. Granted, I've got another short road trip coming up next week, but I don't think it'll mess me up too much.

Stay tuned tomorrow. I'll be attempting a half-day juice fast just for fun (not as part of Amber's cleanse ... there's no fasting required there!). But don't worry: I'll be eating dinner. I can't make it a whole day without solids. But I'll review some juices tomorrow night.
Posted by Bianca at 8:58 PM

Thanks so much for the thorough daily review of this cleanse! It looks amazing! Amber is brilliant. It certainly looks like you eat an abundance of beautiful, fresh foods on this cleanse which is amazing. That banana cherry soft serve looks AMAZING. Count me in on avocado dressing as well! Looks so good!

Sounds like a great cleanse all in all, I'm still really keen on doing this. I might get the book. I really want roasted cauliflower for dinner now too hehe, I ended up having veggies and hummus for lunch yesterday :)

I just got back from 2 weeks away and feel like I need to do a cleanse again. Proof is right here that you don't have to starve to get clean again. Well done!

everything looks amazing. I love her stuff!

Congrats on your three day cleanse! I'm very curious to try making that pudding now.
I'd love to hear about the juice fast if you do decide to do it tomorrow. :)

I really want to do a one day Raw day, you are my inspiration as I have no idea about raw food, I don't own any raw cookbooks and there are no restaurants near me selling raw food (UK) I also don't have a juicer since mine broke!
I love the look of the beetroot juice, my favourite used to be beetroot apple and lime!
Which book would you recommend for a 'first' raw book, for a once a month kinda thing? x