Be An Oatmeal Star!

Got a crazy awesome oatmeal recipe? I do! I give to you, Savory Marmite Oats: 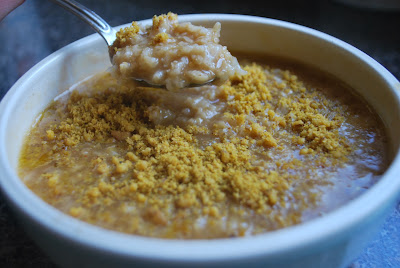 Don't knock it until you've tried it, folks. I know it sounds weird, but if you're a fan of savory oats, you're gonna love this. One morning, I was out of breakfast options (except for oats), and I was craving something savory. Rather than make my usual noochy oats, I decided to stir in some Marmite. Here's the recipe.

Prepare the oats according to the package directions. I prefer to cook mine in the microwave. I just mix the oats and water together in a big ol' measuring cup and heat for 2 to 3 minutes or until thick.
Stir in the Marmite and flax oil. Top with Parma or nutritional yeast. Eat.

See how easy!! Now, my recipe might not win contests or anything, but it's pretty damn good. Speaking of oatmeal contests, Bob's Red Mill is giving you a chance to become an oatmeal star in its second annual "Spar for the Spurtle" contest.

Home cooks and pro chefs alike are invited to submit videos of themselves demonstrating a unique oatmeal recipe using Bob's Red Mill Steel Cut Oats. Three finalists will be flown to Portland for a live cook-off in August! The winner of that cook-off will receive an all-expenses-paid trip to Scotland and $2,500 cash to help rep the Bob's Red Mill team in the 19th Annual Golden Spurtle World Porridge Making Contest. Think you have what it takes? Check out the Spar for the Spurtle website for details. The deadline to submit your video is July 20th.

How interesting!! I definitely am going to have to give this a try!

I'm a big fan of savoury oatmeal. In fact, I don't even like sweet oatmeal that much. I am imagining this recipe and it sounds yummy! though I haven't tasted marmite before, I've heard great things about it. And I loooove Nooch and Parma. :)

I usually make my savoury oatmeal by stirring in vegetable Sambar or Dal.

I would have NEVER thought to use Marmite in oats! Gonna have to check it out.

This sounds strange... but awesome at the same time! Yes. I shall use vegemite??

I love oatmeal, but I've never thought to try it savory. I usually prefer mine with a nut butter, dried fruit, and cinnamon.