This past weekend marked the debut of what will hopefully become an annual event — the Memphis Plant-Based Food Festival. Chefs Bastet and Nigel, a vegan husband-and-wife team who have been on the Memphis vegan scene for years and years, pulled the two-day vegan fair together. It was, by all accounts, a huge success! 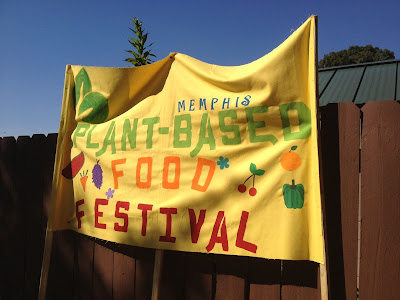 It took place at T.O. Fuller State Park in South Memphis, which, with its fast food joints and mom-and-pop wing shops, isn't exactly known as a vegan-friendly area of town. But vegans, vegetarians, and the veg-curious made the drive to the scenic park for cooking demos, lectures, and shopping from vendors. I hosted a demo on Saturday, but tonight I want to share pics from Friday afternoon. I'll post the Saturday pics in a day 2 post tomorrow night.

Although the fest went all day on Friday, I couldn't make it until work let out at 5 p.m. I was famished, so I stopped by Balewa's Live Burgers food truck for a Raw Mushroom Burger on Ezekial Bread with Tortilla Chips and Sprout Salad (not pictured): 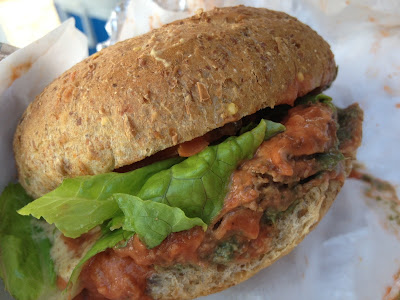 Balewa used to have a place in Midtown selling his delicious raw burgers, but he's currently in transition. He says he's opening a new place downtown soon, which is perfect for me because it's close to the office. The food truck he was serving out of over the weekend was just for the event, although I wish he'd start a mobile business for real.

After I ate my dinner, I headed inside the clubhouse to catch Chef Nigel's cooking demonstration: 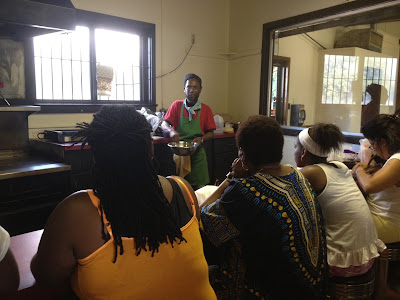 Nigel is originally from Jamaica, and he has an adorable accent. He's also quite the cook. He made Curried Tofu Scramble and Coucous with Sunflower Sprouts. And he was pretty generous with the samples! Look how much food is on that plate: 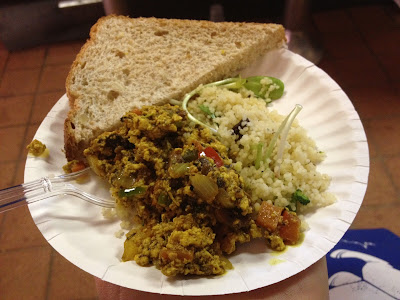 Then it was time for a little shopping. There were several vendors peddling everything from incense and African black soap to homemade crocheted earrings and popcorn: 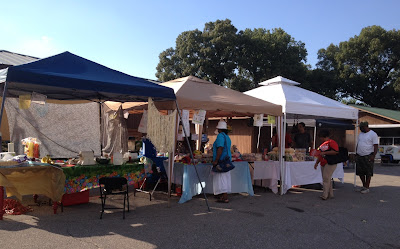 Bastet and Nigel's store — The Natural House of Wellness — had a booth with all sorts of goodies, including their OC Vegan Foods line of seasoned popcorns. I've had their Green Goddess popcorn before, and it was AMAZING. But I decided to go with something different, Garlic Lovers Popcorn! 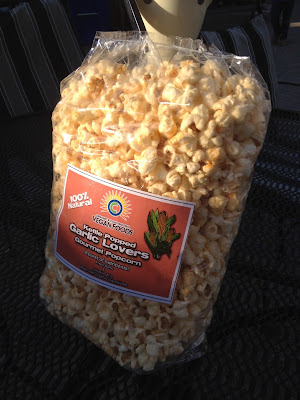 Y'all, if you like garlic like I like garlic (I sometimes eat it raw ... yes, I know that's crazy), this popcorn is for you. It's so garlicky, it's almost spicy! I love it, but I know not to get too close to anyone after eating it.

See you again tomorrow with pics from my cooking demo and other events (and food) from Saturday at the fest.
Posted by Bianca at 11:06 PM

Wow that looks awesome. We are going to have a fest like that in ATL in October.

wow, that such an awesome festival! that burger looks pretty darn delicious!

I'm SO jealous. Memphis needs to bring their Vegan spirit to the Texas Panhandle.

Sounds like a lot of fun! The raw burger sounds really delicious and those are definitely some decent-sized samples!
All over that garlic popcorn. I've definitely eaten some raw too - heh!

I think we need to get a vegan fest going in every major city. I'd love to help host one in the Phoenix area. I love your blog, and have a relatively new vegan food blog as well. Check it out: The Vegan Food Way at: www.thefoodway.blogspot.com ~Tracy

It sounds like I DO love garlic the way you love garlic! That popcorn sounds wonderful! And the burger looks yummy too! What a cool event!

That is so great that they started a plant based food fest! I hope they start to do it annually as well! Everything looks so tasty and it sounds like it was a fun time! :)

That sounds like a great time. I'm so jealous.

I bought a pair of the crochet earrings for my mom! Even though I crochet myself. It's a lot cuter when someone else makes it ;-)