Before going vegan, I'd never heard of fava beans. But you learn about (and develop a taste for) all kinds of new foods when you go vegan. Many of them have ancient roots, like quinoa and falafel, but they're not foods omnis and even vegetarians in rural Arkansas grow up eating. But when I moved to the city and went vegan, my tastes opened up to all kinds of stuff, like fava beans.

My favorite use for the fava, also known as broad beans, is ful medames. It's an Egyptian dish of fava beans cooked with olive oil, parsley, onion, garlic, and lemon juice. There's a little Middle Eastern place, with a few African selections, down the road from my house that serves the best ful on the planet.

And while I can get a bowl of that for under $10, I thought it'd be fun to try at home. I found some dried, shelled fava beans at an international market, and then I found this recipe for Whole Fava Beans in a Spicy Tomato Sauce from Joshua Ploeg's In Search of the Lost Taste, a fun cookzine from Portland's Microcosm Publishing: 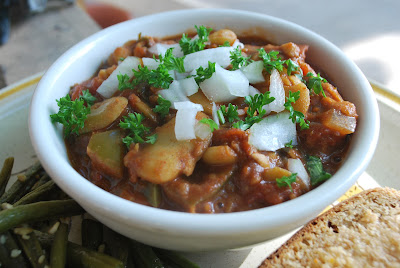 I cooked my fava beans a little too long, so I didn't really have whole favas in my stew. But it was still delicious. The mixture is a little different from the ful I'm used to because it's seasoned with cinnamon, coriander, and cloves. But it's still way delicious! 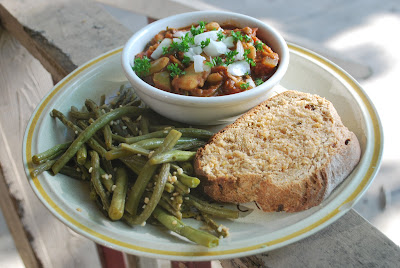 I served my stew with a slice of Sun-dried Tomato & Pesto bread from locally based Shoaf's Loaf Bakery and some sauteed green beans and garlic from the Memphis Farmers Market.

What new foods did you discover when you first went vegan?
Posted by Bianca at 12:12 AM

i discovered that i actually like tofu. when i first went vegetarian (20+years ago!), i tried it and hated it. either i was using bad recipes or just expecting it to taste like hamburgers or whatever, but i thought it sucked. when i finally went vegan last fall, i needed something to replace the eggs i normally ate for breakfast, so i gave it another shot and now i love it!! i don't try to make it into "eggs" or whatever because when i'm starving first thing in the am, i don't have time to fuss, but it's still yummy! and then when i do want to fuss, it adapts to that, too! and silken tofu makes the best brownies!!!

I agree- I've ended up trying (and usually loving) so many different foods that I never would've otherwise! Hooray for going vegan!

That looks good! And that tomato and pesto bread must be something.

I actually think I've only had ful, and fava beans, from a can, but I'm sure I would love those beans fresh. They look fat and fleshy like lima beans.

yum! that plate looks so tasty! fava beans are so delicious -- mmm! i discovered that tofu is actually good! haha thanks for sharing!

We used to get fresh favas in NJ. We used to process them with lemon, nuts, garlic and salt to make a dip. It was so good that we straight ate it for dinner with pita sometimes.

i still have yet to try fava beans, although i have some in our pantry - just haven't gotten around to trying them out yet. the favas 'n spicy tomato sauce sound unique and delicious - especially with the local sides!

when i first went vegan i discovered eggplant. always thought i didn't like it even though i'd never actually tried it. ha!

I know exactly what you mean. WHen I was an omni I was SO picky with what I ate. My tastes started to change when I went vegetarian and now that I'm vegan I eat so many things that I never would have imagined I'd eat! AND I eat so much healthier because of it! I love that!

I've never tried fava beans but I should definitely give it a try! Looks great!

Give us an update on your cookbook!! :)

yum! I discovered fava beans when I married an Egyptian. I discovered the many many joys of cashews when i first went vegan. I love making rich, creamy cashew based desserts...probably more than I should.

I still haven't discovered fava beans. About time I should...

I love fava beans, but I've never found fresh ones. Aren't they spring produce? I should have looked for them this year! This dish sounds good!