Everyone's always like, "Hot potato, hot potato." But what about "cold potato"? I guess most potato dishes aren't all that tasty served cold (although I'll be the first only to admit that cold French fries are kinda awesome ... and let us not forget potato salad). There is, however, one more potato dish that is supposed to be served cold! Vichyssoise! 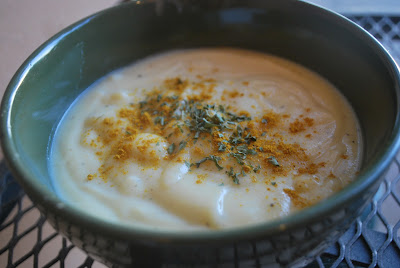 This thick, cold potato soup has mysterious origins, but most tend to believe it was invented by a chef at the Ritz Carlton in New York City in the early 1900s. But it really came to popularity in the 1950s. I heard a mention of Vichyssoise on Mad Men recently, and that reminded me that I absolutely had to veganize this for my new "Vegan Through the Ages" cookbook, where I'll be veganizing trendy food from decade's past. This creamy, potato-leek soup was perfect for today's 100-degree temps.

I served my soup with another recipe I created for my cookbook — Wartime Wheat Bread: 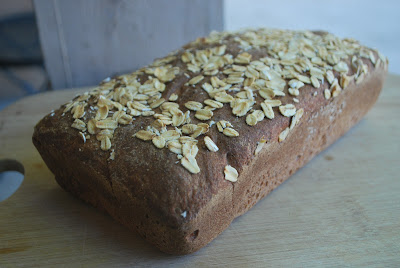 I based this off several 1940s-era recipes for homemade loaves. It's a fairly simple loaf made with whole wheat pastry flour and quick-rise yeast, which seems to have been popular in those days.

Okay, so now time for an awesome announcement! I've been chosen to speak again at the second bi-annual Vida Vegan Con food blogger's convention in Portland! It's scheduled for May 24th-26th at the Portland Art Museum, and tickets go on sale Sunday, July 1st. Check out the Vida Vegan Con website for details, but if you plan on going, you'll want to get your ticket quickly. The event sold out last year.

There really are no words to express how awesome it is to be in the company of fellow food bloggers in the vegan mecca that is Portland. I count last year's event as one of the top five highlights of my life. You can check out my old posts on VCC here, here, and here.
Posted by Bianca at 11:01 PM

I'm so excited that you're already coming up with a new cookbook. And I can't even wait for the one you just created! Congrats on the speaker position.

congrats on your speaker gig! exciting! and that soup sounds delicious -- never heard of it before!

Hooray for your speaking thing! Still haven't decided if I'm going to make it out there or not...I am planning a trip to Portland early next year, but the timing is just a little off! We'll see! And the thought of cold potato soup is definitely weird to me, but there are plenty of cold soups I like so who knows!

Congrats to you on speaking again. I'd love to go experience the event. So is the bread more dense than most? A German friend was saying how the flour here doesn't make for dense breads that he lives from Germany.

Congrats to you on speaking again. I'd love to go experience the event. So is the bread more dense than most? A German friend was saying how the flour here doesn't make for dense breads that he lives from Germany.

I totally feel you on the cold potato thing! I will roast potatoes, stick em in the fridge to get em nice and cold then chow down on them the next morning. I can't wait until the potatoes start to show up at the farmer's market. Mmmm..

I love your cookbook idea!!! Can't wait for it to come out. And the vichyssoise looks delicious!