Who doesn't love a good build-your-own _____ (fill in the blank with sandwich, salad, burrito, etc.) cafe? I like to have things my way. As a vegan, I'm always making special requests wherever I go. But build-your-own diners allow me to make those requests without the guilt. Okay, who am I kidding? I never have guilt about giving servers special vegan instructions! If a restaurant doesn't have anything vegan on the menu, they deserve to have to go out of their way to feed me. But I digress ...

Cheffie's has a set menu of salads and sandwiches to choose from, and a few of those are vegan. But you can also build-your-own salad or sandwich from the many, many ingredients on the bar. Unlike with a salad bar, the employee builds your meal (like Subway), so it's not all-you-can-eat. But trust me when I say they're very generous with their ingredients. My parents and I had dinner at Cheffie's last week, and look how big my salad was! It's served in a freakin' mixing bowl, y'all. I held it close to my head for comparison: 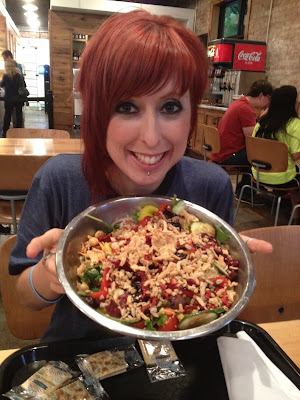 And yes, I have a new haircut. It's an asymmetrical 'do. But look at that salad! Here's what's inside: 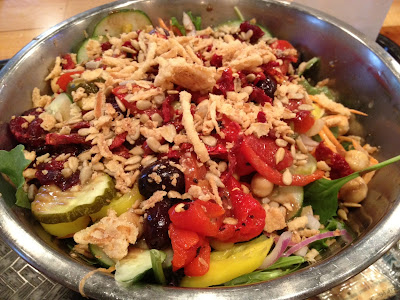 My parents couldn't finish their salads, but believe it or not, I ate the whole thing. I'm a pro at putting away food. If there were vegan competitive eating events, I would enter them.

Anyway, you can also build your own sandwich using these same veggies, as well as hummus, artichoke hearts, and a few other items that didn't make it into my salad.

That place sounds great! French fried onions on a salad are a brilliant idea. And I absolutely adore your new 'do!

Okay, the salad looks great but damn, your hair cut is hot! You look fantastic!

Wow, that is a great salad!

That salad looks so amazing! I love places where you can create your own salads, mostly because I'm so picky! Yours looks so good!

Your hair looks AMAZING! I love the cut, it looks so great on you and the color is gorgeous!

It looks great. There seems to be quite a nice choice of ingredients, with chickpeas for protein. I would definitely go there.

now that's a salad, Bianca! it looks awesome and i love that it's a big 'ol portion, too. huzzah!

your hair cut kicks so much booty! i love it!

The salad does looks fantastic but so does yr new haircut!! Too cool.

You look fantastic with your new hair cut. And the salad looks great too!..

love that haircut!! and WOWSERS! That is a dynamite salad if I've ever seen one!! yummmm!! so colorful! thanks for sharing:) sounds like a fabulous cafe!

Wow, what a great idea for a restaurant. And on a bike/pedestrian path! Your salad looks hearty and satisfying and absolutely delicious.

xo to your hair! so cute!

I LOVE places with giant salads! Especially when you can pick and choose what you want.

And I love the hair, it's super cute!

YUM! We have a local build-your-own salad joint like that here called Zaza's! I miss you dammit. We need to hang out again! Your hair is so freakin' cute!

That is an awesome salad! I wish Cheffie's had been there when I was in HPT!