First, an update on my soon-to-be-released vegan Southern cookbook — Cookin' Crunk: Eatin' Vegan in the Dirty South: The book should be going to press by the end of June or some time around there. So I'll definitely be keeping you posted. I saw the cover design last week! As soon as I can share that with y'all, I will. Yea!

Now, on to my next project: As you may have read in a previous post, I'm currently veganizing recipes from bygone eras for my next vegan cookbook. I've only scratched the surface, and I'm sure there will be all kinds of vegan jello molds and faux shrimp cocktails in my future (or not). But this week, I went with a few fun meal-starters that gained popularity in the 1950s and 1960s.

I made English Muffin Pizzas, which I've been reading were popular little appetizers in the 1950s: 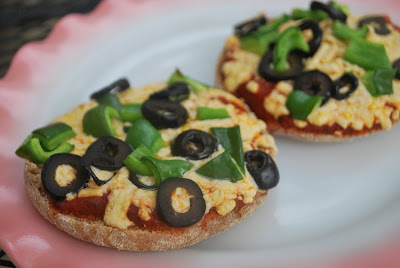 I feel kinda silly even including a recipe for something so simple, but I do include my recipe for homemade pizza sauce with it. And not to toot my own horn or anything, but my sauce is pretty much the bee's knees. I used Galaxy's new Vegan Mozzarella Shreds for these, but any shredded vegan cheese would do. I was super impressed with Galaxy's meltability.

I also developed an Iceberg Salad with Creamy French Dressing: 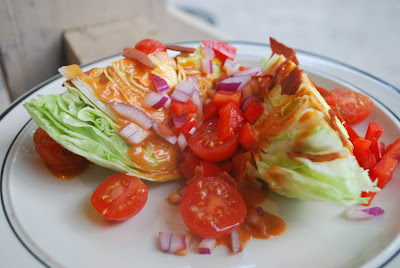 The French dressing is homemade, of course. And I must say that it's way better than any storebought French dressing I can remember. Just the right amount of creaminess, sweetness, and tang. Also atop the salad are cherry tomatoes (from the farmer's market), red bell peppers, red onions, and veggie bacon.
Posted by Bianca at 11:34 PM

For you, these may be 50s and 60s recipes, but in the little Kentish village I came from, these were still popular right through the 1980s! Which is handy, because I loved those mini pizzas!

I'm so excited about your book! Do keep us posted!

Those pizza's look a bit like the "pizza sandwiches" we ate as kids and I may or may not be drooling right now.

And I love the salad - I have recently started buying iceberg lettuce again, after years of buying into the hype that it's just "water" I have been reminded that it's a great nutritional choice and, in the summer, quite hydrating and refreshing! Just wish I had your french dressing recipe right now ;)

How exciting! I'm so happy for you and your accomplishments! You are very inspiring :)

The english muffin pizzas look so good! Homemade sauce is the best! :) Keep us posted for sure, I love these previews! On The Next Food Network Star this season there is a girl that is reinventing 50s and 60s recipes as her "point of view" and I always think of you and your cookbook when I see her!

congrats on your book! thats so exciting!!! I love those mini pizzas! they look so delicious! thanks for sharing!

The english muffin pizzas totally take me back to late night snacks when I was younger. Definitely a keeper recipe.

Iceberg salad -- quite retro! Maybe a vegan blue cheese dressing recipe in the works for the wedge? I haven't seen too many of those around the internet.

Can't wait for the book to come out.

My mom made English muffin pizzas for us all the time--in the 90's. :)

Yessss! I love pizzas in all shapes and sizes. Pizza on toast is a classic!

I think english muffin pizzas was the first thing I ever made. Yours look fantastic!

I want both of these. That iceberg salad looks so delicious and refreshing right now.

Yay!!! So so excited about your cookbook! So happy for you!

When I was a teenager I worked as a "Salad Girl" at a local restaurant - a Salad Wedge salad was a hugely popular item on their menu.
Glad you posted the English Muffin Pizzas, too. I used to make those, a lot, for myself whenever my folks went out & I got to stay home. Ahhhh, memories...

Ooh, I love the theme! That book is gonna rock. I have a book somewhere of all the train wreck recipe disasters from that era. I'll try to find it and share some of 'em with you.

I love English muffin pizzas, my mom used to make them for us!