If You Don't Eat Your Rice Pudding ...

... you won't get a Cookin' Crunk cookbook update! Kidding. I'm gonna give you an update whether you want it eat your pudding or not. I finally got to see the inside design layout for Cookin' Crunk: Eatin' Vegan in the Dirty South, and it looks amazing. The font is sort of funky western rustic, and there's all these classic Southern-looking photos. It's so much better than I could have ever dreamed! I mean, I knew those Book Pub Co folks would do a great job, but this is perfect! It's so rewarding to finally see years and years of work coming together.

The book SHOULD hit stands by mid-August, but you can go ahead and pre-order on Amazon here if you'd like. They don't have the final cover image up on Amazon yet, but it should be there soon. Yea!!! I didn't even know it was on Amazon yet until Joni Newman (Just the Food blogger and author of awesome cookbooks like 500 Vegan Recipes and the Best Veggie Burgers on the Planet) told me on Facebook today.

Now about that pudding. I rarely eat sweets for breakfast. I'm a savory morning gal, but for some reason, I've been craving rice pudding. Now, I've probably only eaten rice pudding once in my life, so I'm not sure where this craving came from. But I needed creamy, sweet brown rice, stat. I found this recipe from Happy Herbivore. 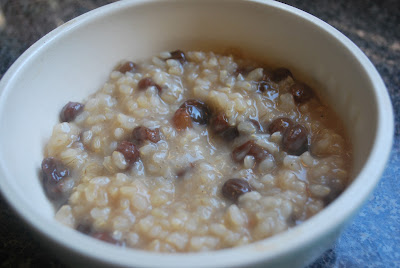 It's brown rice cooked with plant milk (I used flax milk), raisins, cinnamon, and a dash of maple syrup. The mixture is thickened with a little cornstarch. Wow! This was a totally dreamy way to start my morning. The love chewing into the little bits of rice with each bite of creamy pudding. I only wish I had more for tomorrow's breakfast.
Posted by Bianca at 10:51 PM

Ohmygoodness!! Thanks for the recipe! I've been craving rice pudding as well for like the last month, so I can't wait to have this in the morning.

So excited about your book!

Rice pudding is one of my faves - and I can't say I've had an awesome vegan one yet. This breakfast version just might satisfy my craving!

So exciting!!! i can't wait for your cookbook! and that rice pudding sounds delicious! yum!

Congrats Bianca, that is such exciting and wonderful news! And this rice pudding looks AMAZING! Yum!

Will wait for the release of your cookbook. And thanks for the recipe of this rice pudding.