Yea, that sounds crazy ... like something only a stoner would dream up. And maybe Ellen and Portia's personal chef Roberto Martin is a stoner. Or maybe not. Who cares? What matters is the guy's creative as all hell. When I was flipping through his Cooking for Carnivores cookbook, I stumbled on a recipe for Hamburger Spring Rolls.

I'm an adventurous eater. I'll eat just about anything so long as it's vegan and doesn't contain licorice. And I'm a sucker for that weird rice paper roll wrapper texture. So I whipped up Martin's recipe and voila: 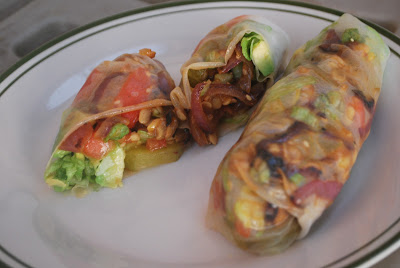 Y'all, the filling for these is out of this world good. It's veggie bacon (I used crumbled tempeh bacon, but the recipe also suggests cooked and crumbled packaged veggie bacon), chopped pickles, lettuce, tomato, charred onions, avocado, and vegan Thousand Island dressing (I used Organicsville brand, but there's a recipe to make your own).

There's also a recipe for making the charred onions, which are really just caramelized red onions. So delicious! This combo really tastes like a hamburger. And it's even better stuffed inside a spring roll wrapper.
Posted by Bianca at 10:28 PM

I know what you mean about the rice paper wrapper texture! And I'm not even a huge fan of burgers and this looks so good!

i don't these are weird at all! they look delicious.

in philly, it isn't out of the ordinary to see philly cheesesteak spring rolls on a menu as an appetizer or even served at a catered even, like a wedding!

I think I'll be making these...

Think I need to buy some spring roll wrappers!

that looks so good! i'm a huge fan of those rice paper wrappers too....i love the colors in the wraps! yum! thanks for sharing!