'Twas the Night Before...

I do a lot of cooking (and prepping for meals) the night before I actually plan to eat a dish. For instance, last night, I spent a couple of hours in the kitchen working on Sweet Potato Hash for the next day's breakfast, as well as Vegan Chicken Salad for tonight's potluck.

I was able to throw a bit of this creamy Sweet Potato Hash in the microwave this morning: 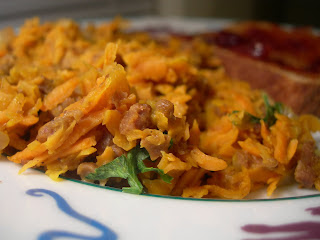 It's a recipe I developed to use in my cookbook. I can't give it all away, but basically, it's shredded sweet potatoes with veggie burger, onion, parsley, and some other stuff (secret ingredients until my book gets published). I had a ton of sweet potatoes my dad gave me a couple weeks ago. This was a great way to use them, and now I've got breakfast for the next couple days since I made a big batch. I served the hash alongside whole grain toast with the homemade organic strawberry jam that I canned last spring. I hand-picked the strawberries on a farm out in Millington, a small town north of Memphis.

For dinner, I went to a vegan potluck at the Sanssouci Collective. It's a co-op of vegan kids here in Memphis. They have potlucks every Monday but I'd never been until tonight. Mostly because the potlucks start at like 8 p.m., which is way past my usual dinnertime. I'm like an old lady on a feeding schedule. At 6 p.m., my stomach starts growling and I get really grouchy. But I snacked until dinnertime tonight, so I was okay.

I brought my own recipe Vegan "Chicken" Salad finger sandwiches: 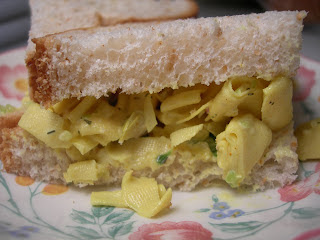 Other dishes at the potluck: Black beans and rice with tater tots (this was sooo delish!), spinach phyllo cups, pita with sesame avocado dip, and chocolate cookies.
Posted by Bianca at 11:59 PM

do you mix up the tater tots in the black beans or just eat them on the side?

It seems wrong to make black beans and rice so unhealthy, but wow that sounds good!

are these the folks that live over on ellsworth near the U of M?

Nope. That's the DeCleyre Co-op. Sanssouci is on Tucker in Midtown. I believe the DeCleyre co-op has potlucks on Sundays. But I've never been to one there.

Your "chicken" salad sandwiches were so good. I ate like six.