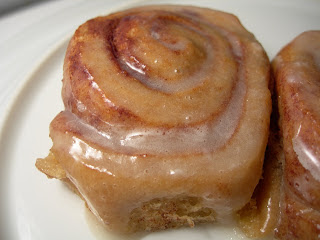 Yum!!! My mom gave me some sourdough starter last weekend. It's water, potato flakes, and sugar (I use evaporated cane juice) and you have to feed it more potato flakes and sugar once a week. You also have to bake bread once a week or throw a cup and a half out. Since the potluck was tonight, I whipped up some cinnamon buns. Yum!

My mom told me how to make them — sourdough starter, flour, a little oil. Mix it together and let rise overnight. Then in the morning (I woke up at 5:45 a.m. for this!), you roll the dough into a rectangle and brush with soy marg and a mixture of cinnamon sugar. Then roll it up, cut into rolls, and let rise for 8 more hours (while I was at work). When I got home, I baked them for 25 minutes and glazed with a soymilk/powdered sugar glaze. 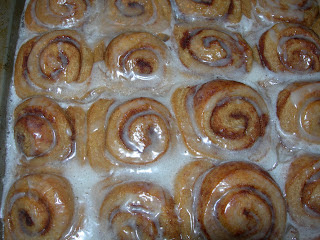 But I did one little thing differently from my mom's recipe. I've been reading Skinny Bitch, a pro-vegan healthy eating book that encourages meat-free, dairy-free diets sans white flour, white sugar, white pasta, Diet Coke, and beer (also coffee, but I'm not giving that up....no way). It's all about getting rid of simple carbs and other crap with no nutritional value.

So I substituted whole wheat pastry flour for the white bread flour. They didn't rise as much as my mom's did when she made them. But they were still damn tasty. And except for the powdered sugar, they were guilt-free. Is there a natural powdered sugar substitute?

Oh yea, there was tons of great food at the potluck tonight: Matt's amazing vegan cheesy sauce pizza, Sarah's Indian-spiced veggies and rice dish, spilt pea soup, apple crisp, and the best strawberries I've ever had in January!
Posted by Bianca at 11:48 PM

Those. look. damn. good. I'm salivating. Seriously. Oh, and you're my favorite person ever.

Those look amazing! I damn myself for not coming to that potluck! I am so getting a sourdough starter kit next payday. I like the Skinny Bitch books, too. I gave up (or resolved to cut back on) white (refined) flour, white sugar, hydrogenated oils, and artificial dyes, flavors and sweeteners last summer. I use unrefined naturally white flour I get from Kroger if you look really hard. But there are times when white sugar is called for (baked sweets) and I'm not going to hold it against myself (or anyone else)!