I had a ton of produce left over from my failed juice fast, so I made a pledge to use some of it this weekend, lest it go bad. In my world, letting produce go bad is a sin. 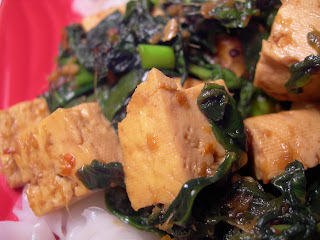 I based it on a recipe my friend emailed me. It's basically just firm tofu, fresh spinach, garlic, and ginger sauteed in soy sauce mixed with agave nectar and chili-garlic sauce. The original recipe called for honey, but I subbed the agave nectar. And it called for red chilis, but I didn't have any of those, so I used a teaspoon of chili-garlic sauce (a staple every Asian food lover should keep in the fridge).

I wanted to serve it over brown rice, so I tried cooking some in my pressure cooker. But no luck. It didn't even begin to cook in the 12 minutes the pressure cooker booklet (that came with the cooker) promised. I placed the rice and water in a glass oven-safe bowl, covered with aluminum foil (according to the instructions for how to cook grains). Then I poured two cups of water in the cooker around the outside of the bowl.

While it was "cooking," the kitchen smelled horrible — like burning alumnium foil. So I took the pot off the heat after 12 minutes. When the pressure came down, I opened the lid and poked into the alumnum foil, and the rice was still hard. So I cooked some rice noodles really quick since my tofu stir-fry was already done. I'll have to try again with the rice, I guess.

Then, for lunch today, I decided to use the rest of the broccoli from my fast, as well as some of the carrots. 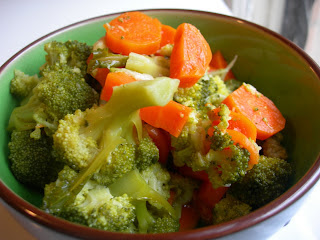 When I tasted the veggies Jill Nussinow "The Veggie Queen" made in a recent pressure cooker cooking demo, they were the PERFECT texture. Not too firm. Not too tender. I wanted to re-create that, so I placed the veggies in the cooker with 1 1/2 cups water. Veggies cook fast, and the book said not to cook the broccoli more than 2 minutes or the carrots more than 4. Since I was cooking the two together, I decided to cook for the full four minutes so the carrots would be done. Unfortunately, that meant my broccoli was so mushy, it would barely hold shape on a fork. The carrots were also cooked too long. I think the book was wrong about the 4 minutes. Next time, I'll try two minutes on the carrots and maybe one minute on the broccoli.

I will figure this pressure cooker thing out, though.
Posted by Bianca at 2:31 PM

I did about 2 1/2 minutes of research online & found a "Pressure Cooking for Dummies" book that probably has a troubleshooting guide and also a book by Lorna Sass called "Great Vegetarian Cooking Under Pressure" that may have some cool stuff in it. Perhaps the dummies guide would be helpful in giving you the scoop on what you need to know about those things since your instruction booklet seems to be more harmful than helpful.

As we discussed, you don't need a book although Lorna's book is truly great. You can find useful, but not vegan, info at www.missvickie.com or get my new DVD Pressure Cooking: A Fresh Look, Delicious Dishes in Minutes, found at http://www.pressurecookingonline.com. Truth be told, though, I only use a spring valve pressure cooker so you'd still need to work on the recipes. Keep trying and you can perfect it. Have faith. The Veggie Queen