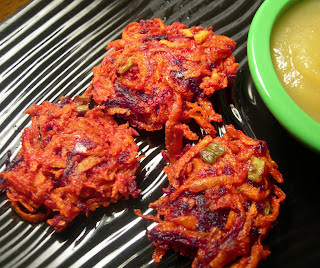 These are the Autumn Latkes from the Veganomicon. Basically, it's shredded beets, sweet potatoes, and carrots mixed with a little flour, water, and cornstarch and fried in olive oil. The book reccommends serving these tasty pancakes with Horseradish Dill Dipping Sauce or the more traditional apple sauce. I had applesauce in my pantry, but no horseradish to make the dill sauce ... so applesauce it was.

I gotta say, these were amazingly good. And I don't even like beets. I've been trying to learn to like them though, and this recipe may have done it for me. It called for 2 cups of beets and 1 cup of sweet potato, but I flipped it with 2 cups of sweet potato and only 1 cup of beets. I was scared to overdo the beets. But surprisingly, beets taste lovely fried up in this way. 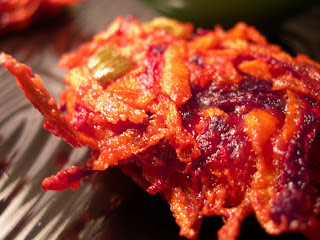 This was my first selection from the 'Nomicon. All the other food bloggers have been oohing and aahing over the Chickpea Cutlets. And I intend on trying them ... very soon. But I've been craving latkes for some reason. These were definately the best ones I've had.

If you haven't purchased the 'Nomicon yet, you must. I've been drooling over it since Christmas. I even made a 'Nomicon wish list of everything I'd like to make. Next up from the book: Creamy Caesar Salad with Roasted Garlic Croutons. Expect that later this week.
Posted by Bianca at 9:14 PM

I LOVE BEETS. I don't understand you beet haters. Hart said they taste "like dirt". What? No; they are sweet. You can get sugar from beets, for crying out loud.

Hooray for us, putting Veganomicon on our Christmas wishlists and getting it!

For the record I love beets. I have no memory of saying such a thing.