I found the new Miyoko's Creamy Liquid Vegan Pizza Mozzarella at Sprouts, and it was on sale for $4.99! So I had to try it! I'm one of those vegans who is quite content with the vegan cheeses we have on the market, and I love a good Daiya-covered pizza. But there's something very appealing about pizza cheese that just pours from a bottle. Maybe it's a nostalgia for liquid nacho cheese from gas stations and stadiums. Or maybe it's because Miyoko is a goddess, and everything she makes it gold. But whatever the case, I was very excited about this! 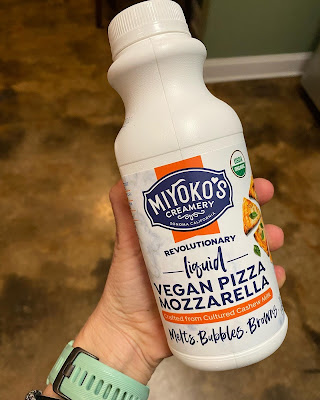 And it did not let me down! I made Mark Bittman's pizza dough recipe from The New York Times with instant yeast and let it rise for a couple of hours. Then I divided the dough into two balls, so I could make my own pizza and Paul could make his. He wanted dairy cheese, which was fine with me because that means I have enough liquid cheese for another pizza next weekend! 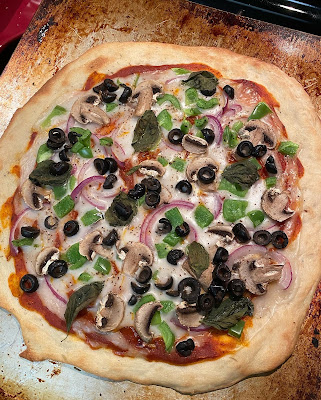 This cultured cashew cheese pours out thick (but not too thick), and you just swirl it on. Before you bake the pizza, it looks like you just poured soup on your pizza. But never fear: After 10 minutes or so in a 500-degree oven, the liquid cooks up into a solid, melty cheese. And it tastes more like dairy mozz than any vegan cheese I've ever tasted! 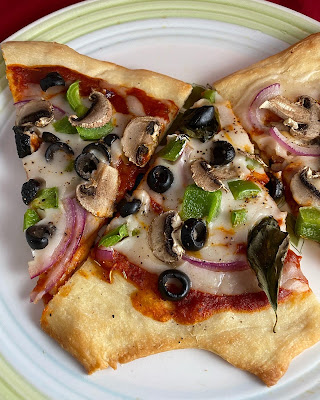 I ate about half the pizza on Sunday night, and I put up four slices for leftovers. In the fridge, the cheese firms up just like any melted mozzarella, and it re-melts when it's heated. This stuff is awesome, and it will be my new go-to pizza cheese. And of course, I'm sure you're wondering if I drank any straight from the bottle? The answer is yes, my friends. Of course I did! And it was delicious!

Oh yippee it is finally in stores! I have been really excited to try this. Thanks for the review. Your pizza combos look delicious.

Oooh, great review! I'm really excited to try this. That was so smart of Miyoko to think outside of the box on pizza cheese. Why make a cheese that holds together in a block when what you ultimately want is for it melt and congeal? I haven't seen it locally yet, but I will certainly snap it up when I do.

Liquid Pizza Cheese from Mikyoko's? YES! PLEASE! Can't wait to see what else you do with it...the Pizza looks awesome - of course! I'll be on the look out for it but it will probably be YEARS before I see it in this region...sigh...

This sounds really great, and I looked at the ingredients and it has no coconut oil! Though it doesn't matter I guess, because it will never come to Australia.
I love that you drank some from the bottle! That is something I would definitely do.

Oooh! I will definitely look for this- it looks amazing.
For Thanksgiving I ordered some fancy-schmancy vegan cheese from Srimu, which I've always wanted to try but it's so expensive. I had a Rich Roll discount code so I finally ordered some (it's still super expensive though.). It should arrive Monday- I'll report back on how it is. It sounds incredible.