El Mero Taco started as a food truck several years ago, and I was always so excited when they showed up at an event I was going to because they always had vegan tacos. Sometimes, it was a seitan taco, and other times, a fresh veggie taco. But there was always at least one option! Then, in 2019, El Mero Taco opened a brick-and-mortar location in Cordova, and I really intended to get there and try more vegan tacos. But somehow, that didn't happen until last Saturday!

In my defense, Cordova is about a 25-minute drive from my house, and I live in a neighborhood with lots of vegan options. It's hard for me to get motivated to drive out east. But my friend Autumn and I needed to get together for a belated birthday thing, and she lives out there. So we met up at El Mero Taco, and I'm so glad we did!

They had two vegan tacos on the menu, so I ordered one of each. The Seasonal Veggie Taco had tender sweet potato and zucchini with a spicy pumpkin seed mole, and the Roasted Cauliflower Taco had crispy cauliflower that was tossed with a more traditional mole sauce and topped with pickled onions and cashew cream. I was very impressed that they had cashew cream! 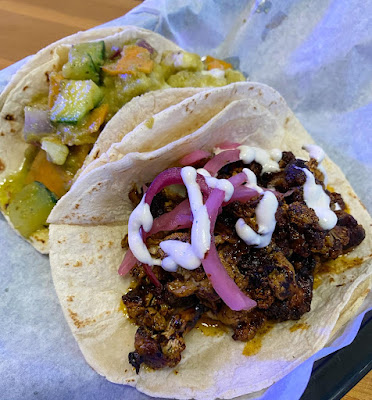 Both tacos were SO GOOD! It'd be easy to throw some veggies on a taco and say, hey, we've got vegan options. But a lot of thought and love went into these recipes, and it was evident from the first bite.

I also got a side of Guac & Chips! The guac was chunky and fresh, and the chips were crispy and tasted like they'd been fried in-house. 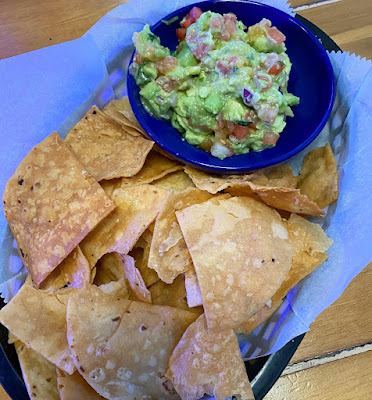 El Mero Taco also has a full bar, and a margarita sounded good. But I was craving winter beer with the cooler weather, so I ordered an Old Chub Scottish Ale. A perfect drink to wash down tacos on a cool night!

They are some really lovely taco choices, good on them for making something above and beyond the standard!