Memphis is about to get another totally vegan restaurant! Guru's City Vegan is planning an opening at 209 S. Highland in the next few months, which will bring us to five all-vegan restaurants (Imagine Vegan Cafe, Plant-Based Heat, Raw Girls, Da Guilty Vegan food truck, and Guru's). Plus, the city has lots of vegan options at non-vegan restaurants!

Guru's has been doing pop-ups around the city to get the word out and build a following, and they're typically at Grind City Brewing on Saturday nights. I was there on a recent Saturday but forgot they would be there and accidentally ate dinner right before heading to the brewery. I was so bummed that I wasn't hungry, so I made it a point to try them the following week when they had a Monday night pop-up at Cordelia's Market in Harbor Town.

I got the City Ribs with Mac & Cheese and Granny's Greens. Y'ALL. THIS PLATE WAS FIRE. 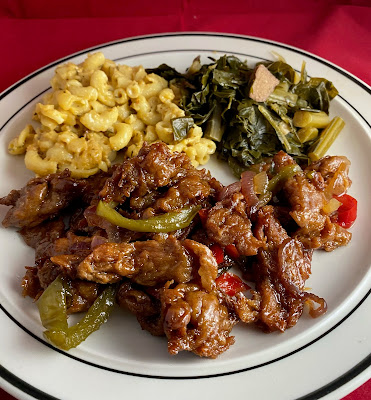 The ribs were soy-based and reminded me of a vegan meat product I tried years ago but could never find again. I don't even remember the brand, but I loved that stuff! So I loved these tangy, juicy vegan ribs. The mac had lots of rosemary, and it was creamy and satisfying. And the greens — wow!! These tasted very much like MY granny's greens!

Besides the pop-ups, they're also doing mass feeding events to feed the homeless here in Memphis, and they recently held an event where they fed 300-plus people (with volunteer help from local rap artists 8Ball and Al Kapone)!

I've peeped out their menu for the brick-and-mortar, and it looks phenomenal! Vegan fried chicken, nachos, drumsticks, quesadillas, lasagna, tacos, grilled cheese, po boys. They've got everything! If you're in Memphis, give them a follow on IG to see where they're popping up next. I'll definitely keep y'all posted when they open their restaurant space.

As always - I LOVE hearing about your veg options! You are very fortunate to live in an area that is thriving with small businesses that are vegetarian/vegan!

Other than not understanding the concept of "not eating because you're not hungry", this sounds amazing! :) You have so many great options in Memphis!!