A couple weeks ago, when we were solidly in mid-October, I got into the fall spirit with an Oktoberfest-themed meal of Vegan Beer Brats and German Potato Salad, served with a Crosstoberfest beer from Crosstown Brewing. I used Simple Truth Kielbasa for the sausage, and I simmered them in Crosstoberfest beer. The potato salad was made with veggie bacon and cooked onions in the traditional German way (with a touch of added mayo, which is not traditional but delicious). 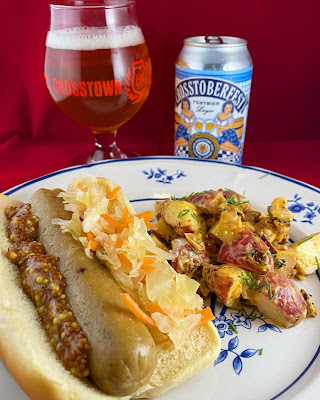 Paul and I love to go to the Wiseacre Brewing taproom downtown because Paul loves the pizza at their in-house eatery, Little Bettie. Typically, he orders pizza, and I just get beer. But they do have a vegan pie on the menu, so I finally tried The Slightly (that's the name of the pizza). It's a very simple thin crust pizza with tomato sauce, shaved garlic, olive oil, and chili oil. No cheese. I was a little skeptical of a cheese-less vegan pizza with very few veggies, but it was a good. More a flatbread with sauce on it. But good! I did add vegan cheese to my leftovers the next day. 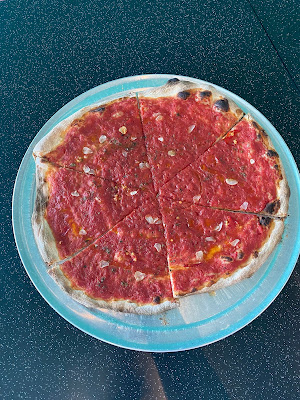 Here's a recent Baked Loaded Sweet Potato with chickpeas, kale, and tahini sauce. I love a simple and healthy meal like this! 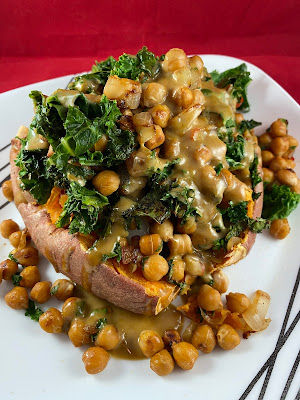 I recently made the Don't Waste the Good Stuff Squash Soup from the No Meat Athlete Cookbook, which uses all bits of the squash (including seeds and stringy bits). It was really yummy, and you couldn't even tell the seeds were blended into the soup. I served this with some toasted sourdough from Lucy J's Bakery. 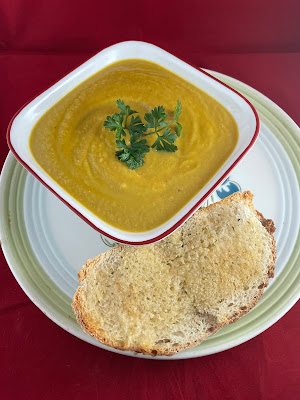 And finally, here's some Purple Hull Pea Soup made with fresh, local peas and tomatoes (the last red ones for the year!). I made this in the Instant Pot and served with some frozen cornbread that I'd put up after baking a batch a while back. 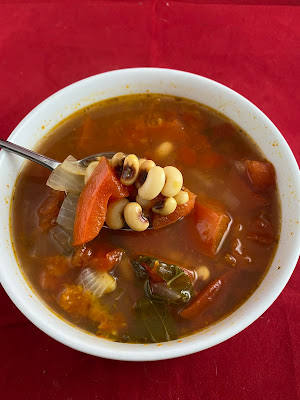 I feel that is a little rude of them to call that a pizza. Definitely more a flatbread appetizer or something like that. But I am glad it was at least an option!

That baked sweet potato looks so good! Gonna have to try making that soon.

It's funny because I literally have that exact same favorite, easy meal- baked sweet potato with kale, chickpeas and tahini sauce. For some reason I haven't had it in a while- I'll have to get back to it.
I'm going to check out that soup! I have the No Meat Athlete cookbook but always forget about it until I see it on your blog.

Everything looks great! I'm finding so many different things to stuff potatoes with these days! I would have never dreamed of so many options when we were younger!

I'm with Susan about the pizza. I'd be skeptical too. But I'm glad you enjoyed it!

I'm loving the idea of that stuffed sweet potato. I eat all of those components separately, but I hadn't thought about putting them together.