Sunday was the Summer Solstice, but since it was also Father's Day, I decided to hold off on celebrating until Monday, June 21. In some traditions, the 21st is the first day of summer anyway. So yesterday (Monday), I blessed a few sunflower seeds with wishes for the coming season and threw them out into the yard for the squirrels.

For each Sabbat, I use the Llewelyn's Sabbat Almanac to plan my feast. For Litha/Summer Solstice, they recommended breakfast foods since we're celebrating the sun. I guess I could have these recipes for breakfast, but you know what's more fun than breakfast? Brinner! Breakfast for dinner!

The recipes in this almanac are not vegan. Not even close. But I can veganize anything! There was a recipe for a Breakfast Sweetie Biscuit Sandwich that called for fried eggs and sausage and goat cheese, but I made a vegan version with a tofu egg (made with Vegg yolk), Dr. Praeger's Sunday Funday Veggie Sausage, Daiya shreds, spinach, and dandelion jelly. 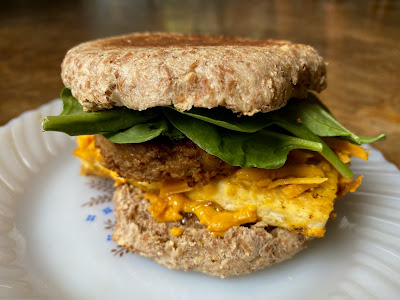 The recipe suggested a fruit jam, but I had some homemade dandelion jelly that my co-worker Dee made, so I used that! I loved the contrast of savory and sweet! The bread is an Ezekiel sprouted grain English muffin. I love the Dave's Killer ones, but they're a little small for breakfast sandwiches. These Ezekiel ones are bigger.

For dessert, I made Blueberry Mug Cake! The recipe for this wasn't vegan either, since it called for eggs. So I subbed a mixture of baking soda and vinegar for the eggs (maybe a 1/4 teaspoon of baking soda and a teaspoon of vinegar ... I can't remember because I just winged it!). It turned out really great! Soft and cakey and really delightful. It was sweetened only with maple syrup, and I used whole wheat pastry flour for half the flour, so it was kinda healthy! 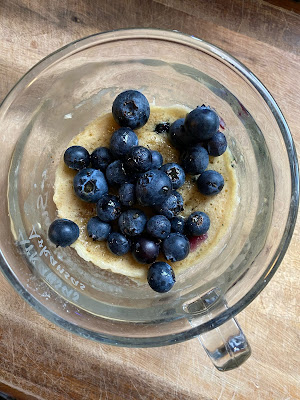 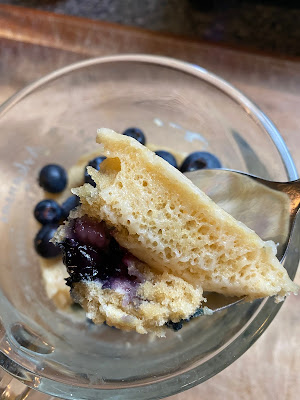 Happy Summer, y'all! It's my very favorite season of the year! So glad it's tank top/pool/kayaking season!
Posted by Bianca at 6:30 PM

Happy solstice! We just had the winter solstice here. I was working on the 21st, so on the 20th I made some apple butter cookies and on the 22nd I made a lovely hot soup for dinner.