It's my third day of working from home and trying not to go out into the world (aside from grocery runs, liquor store runs, and running/walking my dog). I have plenty of work to get caught up on, so the break has been nice so far, but there are moments when I really miss people. Like on St. Patrick's Day yesterday!

I started the morning with an Irish Coffee (coffee with a splash of Jameson and BomBom Brands hempmilk liqueur). I make this every year, but when you're working from home, you can make it just slightly stronger than usual. :-) 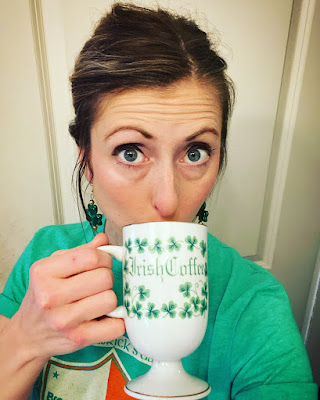 I wore a green tee and shamrock earrings even though I knew no one would see me. I refuse to let a holiday go by uncelebrated!

After 5ish, I did an Irish car bomb to celebrate the end of the work day. That's vegan Guinness with a shot of Jameson/BomBom. By the way, I used the BomBom rather than Bailey's because it's what I had on hand, and the taste is very similar. Then my friend Misti texted me asking if I wanted to get a green beer somewhere. Of course I did! But that didn't seem like the responsible choice, so I turned her down. Bummer.

Instead, I stayed home and made the Kale-cannon Stuffed Portabellas from the No Meat Athlete Cookbook. 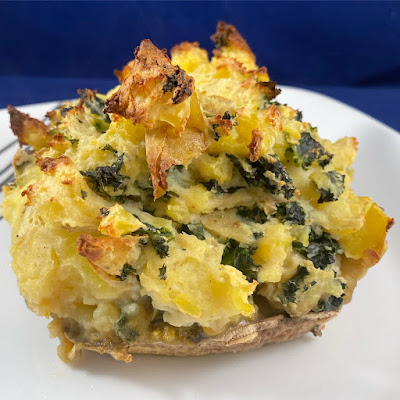 Marinated bellas are stuffed with mashed potatoes mixed with kale (rather than cabbage, which is in traditional colcannon). The potatoes have cashew cream in them, which makes for really rich and creamy taters, much better than those made with milk!

I hope everyone had a great St. Pat's Day despite the home quarantine. In Shelby County, Tennessee, where I live, many bars and restaurants are still open (though many are moving to takeout only). I feel really bad for the service industry through this.
Posted by Bianca at 9:00 PM

Love that you were able to have such a lovely themed food day in your house.