I ran the Little Rock Marathon on March 1st! This was my 4th full marathon (although I've attempted five marathons, but didn't make the cut-off for one). It was my fifth time running the Little Rock race and the second time running the LR marathon (the other three times, I ran the LR half-marathon). Little Rock is my favorite annual race because the medals and themes are amazing. I mean, look at the size of this thing!! Bonus: I shaved 14 minutes off my best marathon time in this race. 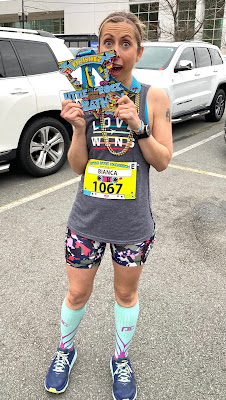 You can see what I ate the day before my race here. On race morning, I woke up early at my friends Sheridan and Drew's house and had this King Cake Bagel with Watermelon Seed Butter & Strawberry Jam. Y'all, watermelon seed butter by 88 Seeds is my new favorite thing. Plus, coffee of course! 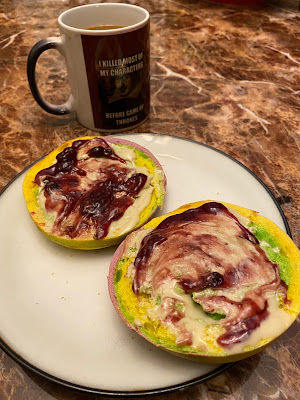 Sheridan is super-amazing and always volunteers to drive me to the race start each year. This means she's driving across town at 6:30 am on a Sunday. She's my best friend, and I love her. After she dropped me off, I snacked on a banana and took some pics with race props. The theme this year was "Totally Awesome," and everything was 80s-inspired. As a child of the 80s, this warmed my heart! 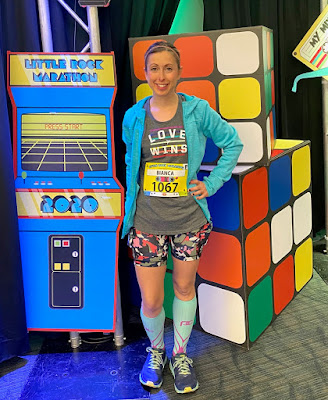 I crafted a perfect playlist of 80s workout songs (Let's Get Physical, Jump, and so many more) mixed with my favorite hype songs (Lose Yourself by Eminem, This Girl Is On Fire by Alicia Keys, etc.). When the race kicked off at 8 am, I was ready to go!

I have a 50K in three weeks, so racing a marathon probably wasn't the smartest move. And I didn't intend race it. I had planned to treat the race as a training run for my 50K (my plan called for 22 miles that day, so what's a few more?). I went out at an easy "all day" pace, but I've been doing lots of speedwork lately, and I guess my easy pace is getting faster. Also, the temps were perfect for me (low of 59, high of 64). I find I do my best in races in this temperature range. Last year, during the LR Half, it was in the 30s and HAILING, so this weather was a vast improvement.

Around mile 8, I realized I was in front of the 5:30 pacer. My previous best marathon time (from St. Jude 2016) was 5:41, but I failed to check that stat before I left for Little Rock. It was written in my training log. And for some reason, I was thinking my best time was 5:33. So when I realized the 5:30 pacer was behind me, I thought "Hmmm, maybe I can keep him there the whole way and PR." And that's what I did!! I finished in 5:27, which may be slow for some people. But that's fast for me! I choked up a little as they put this massive medal around my neck. I wanted this medal so bad, and I felt like I really earned it with a PR. 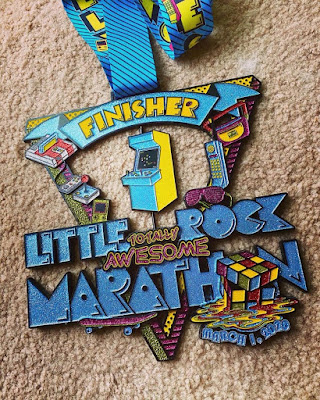 I even managed to negative split the race (meaning I ran the second half faster than the first), which I've never been able to do. I've been working on hard on that in my training, and it's paying off.

Along the route, I took every beer shot, mimosa shot, even Fireball (!!!!). At mile 9, someone was handing out communion bread and grape juice, and I figured "what the hell?" Couldn't hurt. Also  took some pretzels, tater tots, and pickles that were offered along the course. I packed Clif Blocks, GU gels, and Clif Endurance Bites to snack on every 45 minutes. I always take in about 100 calories every 45 minutes when I'm running long-distance.

After the race, volunteers at the post-race party were handing out Pasta with Marinara Sauce. Every year, this has cheese mixed into the sauce, and every year, I ask them to make me a fresh cup without cheese. And every year, they do because the volunteers are awesome! It's so nice to have hot pasta after running for miles. I also took full advantage of my two free post-race beers! Btw, this cup was full, but I ate half before I remembered to take a pic. I was hangry! 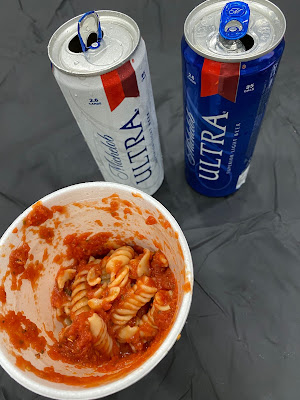 After my snack and beer, Sheridan picked me up at the convention center, and I snacked on this Clif Builder Bar for protein. The vanilla almond is sooooo good! 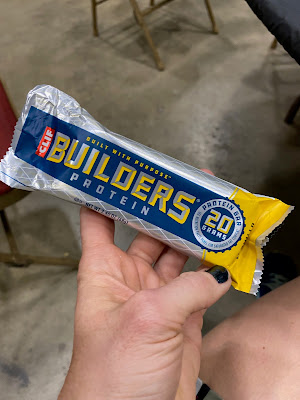 We went back to her house so I could shower, and then we headed back downtown for an early (and well-deserved dinner) at Little Rock's new vegan-friendly Ester's Pub! 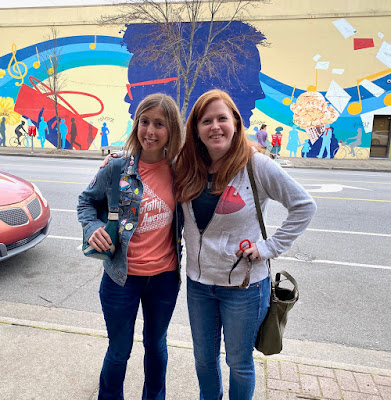 This place has so many vegan options! I ordered the Au Jus Sandwich with seitan roast beef, vegan cheese, and au jus sauce, plus battered fries (these are the best fries I've ever had) and vegan dill sauce for dipping. Ate every bite! 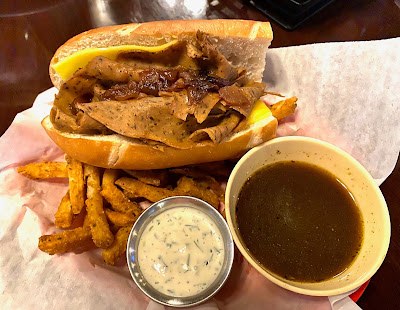 After dinner, I made the two-hour drive back to Memphis. I was exhausted when I got home! But I made time for a couple of beers in my new Little Rock 26.2 finisher pint glass! 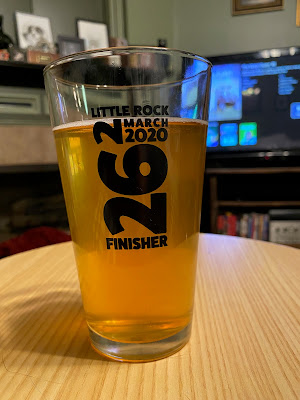 Congratulations! That is a great result!
Followed up by that amazing sandwich, that is what I need in my life.
I am impressed you drove home two hours after all that running and dinner, I hope you slept very well that night! Hopefully no scary horror movie memories to haunt you.