I ran my first 50K on Saturday, March 21 — a solo, completely self-supported adventure on the trails at Shelby Farms Park in Memphis. 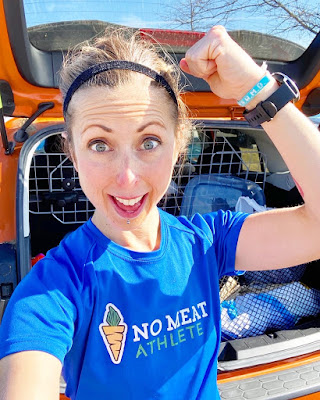 I've been training for a 50K for three years. THREE YEARS! Back in 2018, I signed up to run a 50K and started a training plan. This was just a few months after recovering from my second stress fracture (my first one happened years before while training for my first half-marathon). I dove into the training plan, and then one month before the race — bam! — another fracture. I let that heal, got the doctor's okay to run again, and signed up for the same race in fall 2019. And then — bam! — another fracture only a few weeks into training.

But there's one thing about me — I'm stubborn AF. And when the universe tells me no, I say, "watch me." And so, I let that fracture heal, looked deeply into why it was happening/how to prevent it, and then signed up for yet another 50K — the Big Buffalo 50. I started my training plan yet again, and for the first time, I made it through the training without a fracture. My race was set for March 21, and it looked like it was FINALLY going to happen for me. And then — bam! — COVID-19 ruined everything for everybody.

My race was postponed until fall, so I will have a chance to run it with the group, but I was all trained up and ready to race now. For months (years, really), I've been running around 30-40 miles a week, forgoing any semblance of a social life, getting up at the crack of dawn on Saturday/Sunday mornings for long runs and back-to-back recovery runs. No way was all that training going to waste. I would run this 50K solo, using my car as an aid station after every six-mile loop.

So I set my alarm for 5 am on Saturday and woke up to this King Cake Bagel with Almond Butter & Maple. Bagels are my go-to pre-race breakfast. 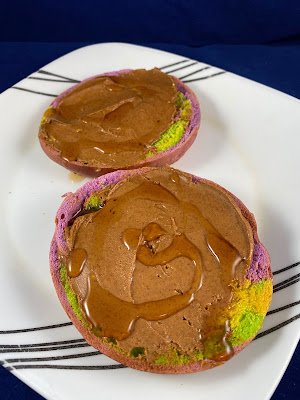 I made the drive out to Shelby Farms Park around 8 am so I could start around the time the race would have started. I had a banana in the car on the way. The park is still open to the public, but the bathrooms and facilities were understandably closed. That meant all peeing would be done in the woods! That's no problem for me! 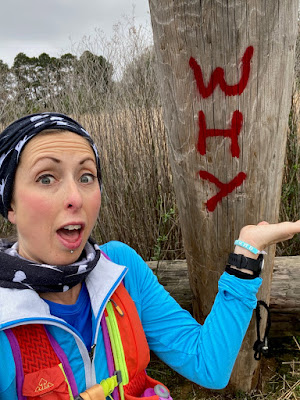 I parked my car in the main visitors' center lot. I was trying to stick as close as I could to the Big Buffalo route, which is five 6.25-mile loops around the massive park. It's part paved/part gravel/part rugged trail. I packed a few gels, blocks, and rice balls the bladder holder of my Nathan hydration pack and filled two 10-ounce bottles with Nuun water. After each loop, I'd be able to stop at my car for extra water, snacks, dry shoes, etc. Here's my survival kit, which was loaded with extra gels, tamari sesame rice balls (from the No Meat Athlete Cookbook), salt tabs, Clif cubes, alkaline electrolyte water, a Clif protein bar for post-run, Pringles (salty chips are a MUST for any long run!), an extra pair of trail shoes and socks, my hydration bladder (just in case), and a few towels since the trails were pretty muddy. 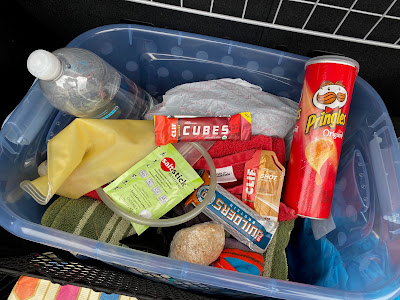 The first two loops went so smoothly! I passed several other runners on the course, also out there running it anyway. One woman passed me and said, "You making up for Big Buffalo?" And I said "Yep! Running the 50K!" She wished me luck and said she was aiming for 26.2 that day. I saw another runner friend, Sherry, out there pounding the miles too. Every time a runner passed, we'd exchange a knowing smile or nod or a few words of encouragement. The running community is just the best!! 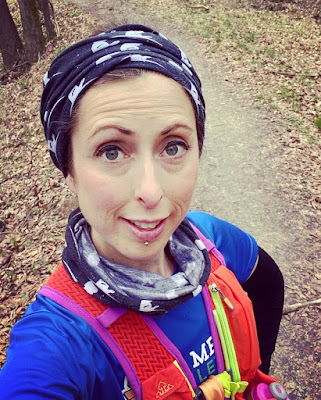 The wheels started to come off a bit on the third loop when the realization set in that I was only halfway through. I'd run the first two without headphones, just basking in the sounds of nature. But when I need a distraction, my headphones really help. I listened to the latest No Meat Athlete podcast episode about finding ways to stay positive during this virus outbreak, and that helped. And then I listened to an episode of the Plant-Strong Podcast with Rip Esselstyn. I typically love that podcast, but this particular episode was all about reversing diabetes and I got pretty bored. I eventually switched to my favorite running playlist, and that really improved my mood. That said, the fourth lap was a true slog. Wow, was that hard! The fifth loop went much better because I knew, with every landmark I passed, that it'd be the last time I'd see that for awhile!

And then I was done!!! There was no finish line to cross, no race medal or beer waiting. Just the satisfaction of achieving a long-time goal! By the way, I took this pic around mile 19. No way I could jump like that at mile 31! 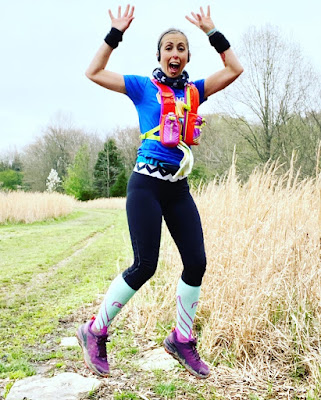 I finished in 7 hours and 35 minutes. That's slow, but I'm still very proud. I took a few short walk breaks in the last two laps, but for the most part, I ran the whole time. Because part of the route was on muddy trail, I was definitely slower there. And with it being my first 50K, I have some lessons to learn about pacing. But I just ran my fastest-ever marathon in 5 hours and 27 minutes on March 1, so I know I've got it in me to shave off some time before the Big Buffalo 50's new fall race date. 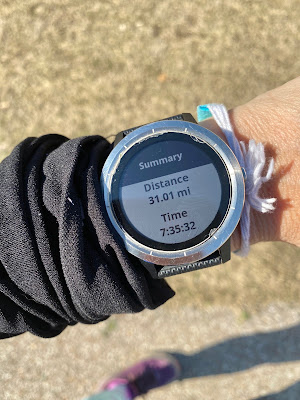 After my run, I stretched, snacked on chips and a Clif PB Chocolate Builder's Bar, and made the drive home. I was so stiff after sitting in the car for 20 minutes on the drive. I struggled to get down the driveway, and as I made the turn to my porch, I noticed something gold and shiny hanging on the doorknob. It was a homemade medal!!!! Made from spray-painted cardboard. 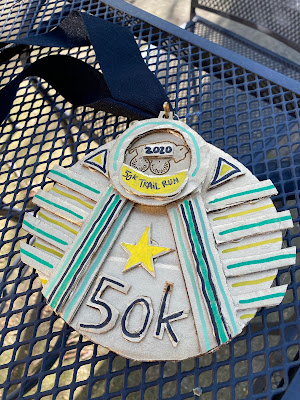 I flipped it over to find this lovely note! 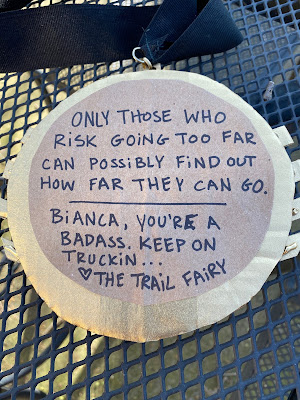 I was stunned! Who could have done this??? I'm not a crier, but this made me tear up a little. I started texting friends to get to the bottom of this mystery so I could thank someone. Turns out, the night before after I'd hung up from a virtual happy hour with a few friends, they'd plotted to craft a medal and leave it for me. My friend Audrey donated an old triathlon medal with a buffalo on it for the top piece. How awesome!!! This is better than any medal I could have gotten at the race.

I cracked open a Wiseacre Ananda IPA and enjoyed it in the shower. Nothing beats a well-deserved shower beer after a hard run! 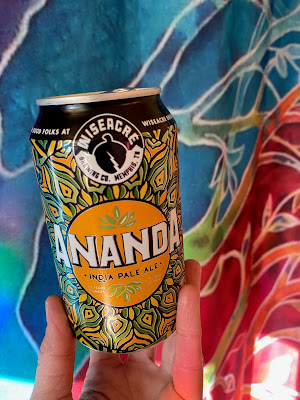 Once I was all cleaned up, I called in a pick-up order for a Vegan Cheese & Veggie Pizza from Midtown Crossing Grill. I'm so grateful they're still open for takeout because I NEEDED this pizza. I ate every slice, washed down with a second beer, while enjoying Schitt's Creek on Netflix. What a perfect day! 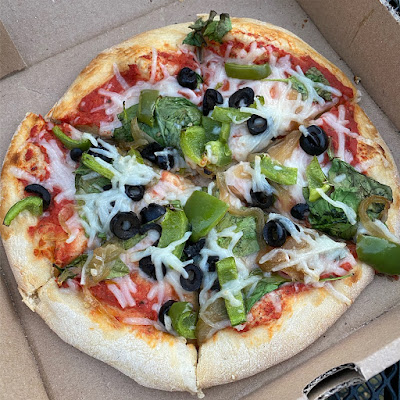 Note: In case you're wondering how I'm attempting to prevent future fractures, I thought I'd go into that here. After my fourth metatarsal fracture (those are the bones that connect to your toes), my doctor told me I either 1) had low bone density or 2) I had back luck. Lower bone density does run in my family, so there's likely a genetic factor there. But he never offered a bone density test, so I can't say for sure. I did read up a bit on what causes frequent fractures in women, and a lack of nutrition/fueling in comparison with calorie burn can be a contributor.

I've always eaten a lot of food, but I don't think I was trying hard enough to re-fuel after tough training days. On some runs, I can burn up to 2,000 calories, and on those days, I should be eating something like 4,000 calories to make up for the loss. But I don't think I was managing that well before. In this last training cycle, I really focused on eating more food! And that seems to be helping so far. Just wanted to put that out there in case other female runners find themselves in the same boat.
Posted by Bianca at 9:00 PM

That was awesome Bianca! You are such a stud. Your medal waiting at home made me tear up too!! xoxo, Rachel

Wow that is perseverance!! Well done.

You didn’t have to go so hard but you did anyways! Super inspiring stuff, I teared up (been reading your blog for a long time so I experienced your struggles in real time) Thanks for the good vibes during these crappy times.

Congratulations!!!!!!! What an awesome accompishment! You must feel so proud. As a side note I think you should get a new doctor He didn't offer a bone density test after you had four fractures??? Seems like he didn't care that much. Luckily you were able to handle it yourself- sounds like what you're doing is working

Congratulations, that is super impressive!! So sweet of your friends to put together that medal, too.