Here's a rundown of some stuff I've been eating lately! Lots of randomness.

Check out this fluffy ass Chorizo, Potato, & Cheese Omelet I made using Follow Your Heart Vegan Egg, Trader Joe's Soy Chorizo (leftover from a taco night), hash browns, & Follow Your Heart Pepper Jack. I've been eating the hell out of some Vegan Egg lately. It's basically the best vegan invention of all time ever. I typically just scramble it, but for this, I left it alone in the hot skillet until it was fully cooked through, flipped it and cooked a bit longer, and then stuffed it. 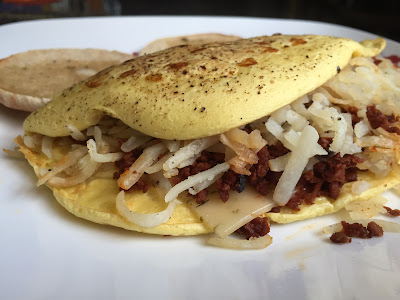 Not all of my breakfasts have been so decadent lately. I've been having these Pear & Rhubarb Protein Smoothies after runs. I used this recipe on the Vega website, which includes instructions for stewing the rhubarb into a jam before adding it to the smoothie with pear, ginger, coconut-almond milk, and Vega One French Vanilla protein. 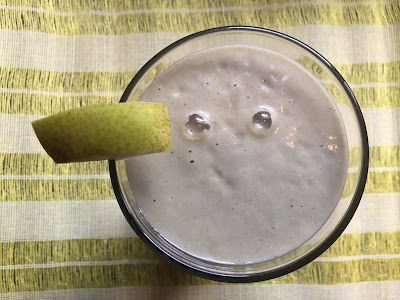 I'm also all about the FitQuick Protein Waffles! I ordered a couple flavors after becoming obsessed with the Rise & Resist podcast (co-host Holly Noll makes FitQuick). Each waffle has 22 grams of protein, and they're gluten-free. Lacy Davis, the other co-host, has talked on the show about topping her protein waffles with banana soft serve, so that's what I did this morning with this Birthday Cake Protein Waffle. Waffles and ice cream for breakfast? Yes please. 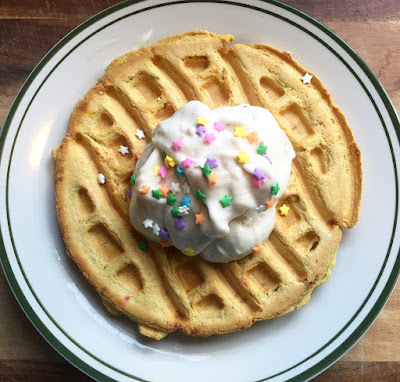 Here's a not-so-exciting-looking (but still really tasty) quick breakfast I had in our flat in Greenwood, Mississippi last week. I traveled there with a co-worker/friend for a travel feature she's working on, and I had this breakfast Friday morning in our cute little rented shack. It had a microwave, so I packed some instant Oat Revolution Apple Cinnamon Steel Cut Oats and added a pack of Justin's Vanilla Almond Butter. Not pictured is the banana on the side. Enjoyed with some too-strong hotel coffee prepared by my friend Shara. 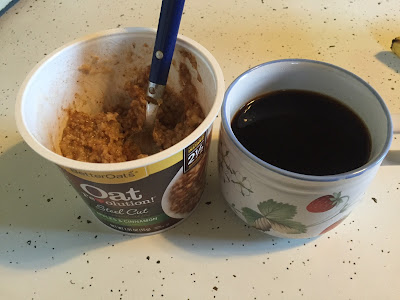 Today was Dining Out for Life day in Memphis. That's when restaurants across the city pledge to donate a portion of their proceeds to Friends for Life, an organization that helps low-income people living with HIV/AIDS access services. I'm on the board of directors at FFL, and I usually volunteer at the event. But I didn't have time today due to some work obligations. But I did stop by Pink Diva Cupcakery — my friend Cassi's all-vegan cafe and bakery — to grab some takeout since she was participating. I got a big ole to-go order of her Veggie Pasta with tempeh, kale, zucchini, carrots, and broccoli. 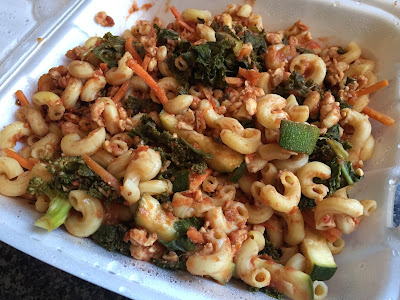 Cassi has a point system at Pink Diva, and for every five visits, you get a free cupcake. I've definitely been there more than five times, but somehow, I never knew about the cupcake thing. Today, she reminded me that I was due for my free one. And she had the most beautiful little Strawberry Shortcake cakes. This one was stuffed with fresh strawberry puree and topped with whipped topping. 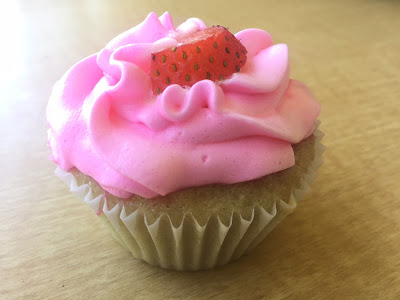 Speaking of strawberries, check out my first strawberry from my garden! I planted strawberries last year, but it was too late in the season, so I didn't get any berries last year. Luckily, they're perennials, so they come back every year. This year, there are TONS of green berries! And one of them turned red earlier this week. I immediately devoured it! Didn't even wash it off. And it was so juicy and delicious. 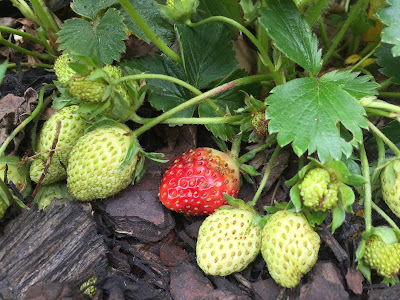 After we got home from our overnight stay in Mississippi last Friday, I had a hankering for some fried rice. So I went down to Shanghai Restaurant — my neighborhood Chinese joint — and ordered the Tofu Fried Rice. Good stuff. Just fried tofu, fried rice, and onions. It's way too much for one meal, but I ate it all anyway. No regrets. 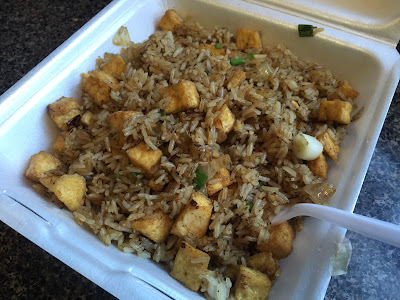 It wouldn't be a Stuff I Ate post without a few meals from Imagine Vegan Cafe! I didn't make it to brunch last Sunday, but the Sunday before last, I brunched at Imagine. And I was craving something wholesome. So I ordered the Southern Staple — brown rice, black beans, collard greens, & garlic aioli. Served with cornbread. 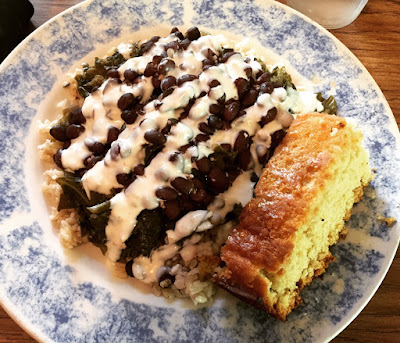 Today, also for Dining Out for Life, I stopped by Imagine and had this Philly Cheesesteak with homemade white cheese, bell pepper, onions, and vegan roast beef. Broccoli with ranch dipping sauce on the side. My friend Pam just got hired on as a cook, and this was the first meal she cooked for me! It was perfect. 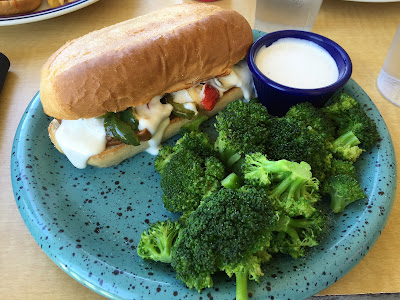 I ordered the Philly because it's possible that the recipe may be changing up soon! Imagine is re-working its menu, and the new chef Don is looking to sub out homemade seitan in some of the sandwiches that currently utilize storebought plant meats. I was lucky to be part of a taste test panel last week sampling some of the possible new items. We tried Don's seitan in a BBQ Sandwich (top left) and on the Philly (bottom right). And we tried his seitan bacon and cashew cheese on the Bacon Cheeseburger (top right) and as queso dip (bottom left). 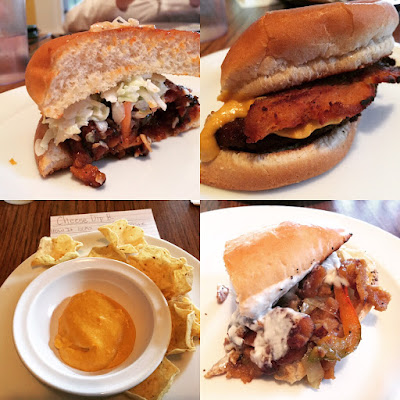 All of Don's tester items were amazing, and they may be coming to the menu soon! They're still doing taste tests and making tweaks, so I don't know when and what changes will be happening. But look for homemade seitan and cashew cheese at Imagine soon!
Posted by Bianca at 11:11 PM

Mmm.... so much good food as always! I am going to make an omelet the next time I pull out my Vegan Egg.

Your first strawberry is adorable! Yay for growing things! Everything at Dining Out For Life looks epic too, so much seitan based goodness!

How exciting to have your own strawberries!! There really is something about a good tofu veggie fried rice from chinese takeout that just hits the spot.
Free cupcake??? Ummm... Amazing.
Ttrockwood

I keep seeing all the cool things people use their VeganEgg for.... maybe I should do a dinner of veganegg omelets with veggies inside.