Yesterday, I posted about the epic vegan brunch at The Root Cafe that Sheridan and I had when I visited her in Little Rock, Arkansas this past weekend. That brunch happened on Sunday morning, but I spent the night in LR on Saturday so I could watch Sheridan's musical at the school where she teaches drama. I arrived in Little Rock around 4 p.m. on Saturday, about three hours before the show (and just in time for dinner).

So before I headed to the show, I stopped in at the vegan-friendly Three Fold Noodle & Dumpling Co. in downtown Little Rock. This place has been open for awhile, but somehow I've never made it there. But I'd heard Sher rave about it and read about it on Dana's Vanishing Veggie blog, so I was dying to try it! 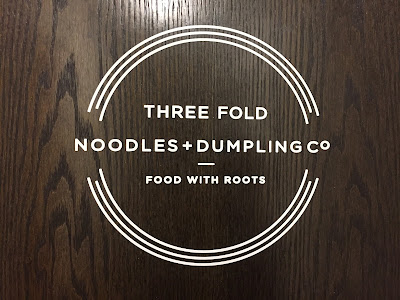 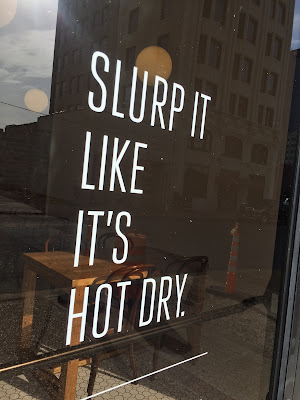 The menu is really small, but everything looks amazing. They have steamed dumplings, steamed bun sandwiches, and noodle bowls, and there's a vegan option for each. Plus, there are a few sides (taro chips, sesame balls, and dairy-free bubble tea!).

I opted for the Dumpling Bowl with the tofu, shiitake, & seasonal veggie dumplings and medium-spiced chili sauce. 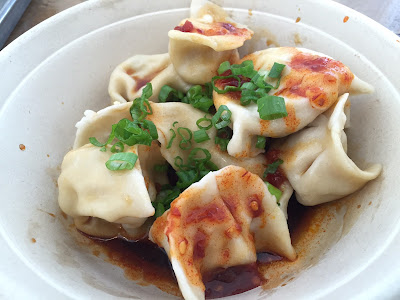 These were outrageous. Soft, warm, savory, and loaded with mushroom filling. The chili oil was only slightly spicy, and the green onions added just the right amount of flavor. I really waffled between getting the steamed bun or the dumplings, but I think I made the right choice for my first visit. I will definitely be back to try the bun later in the year.

For dessert, I had to choose between bubble tea or sesame balls. I LOVE bubble tea, but I can get dairy-free boba drinks in Memphis (even though I don't order them often enough). So I went with the Sesame Balls. These are deep-fried mochi balls stuffed with red bean paste. 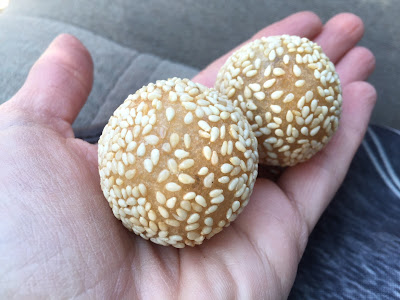 Mochi is pretty much my favorite, and then when you add deep-fried to the mix, well, that's a recipe for success. These were only lightly sweet and not too greasy. Plus, they were served warm. An order came with five. I bought a bag of them to go as I was walking out the door, so I had two in my car right away and saved the rest for later. 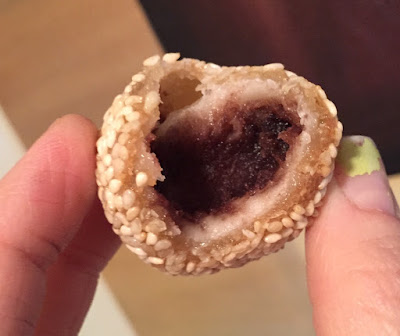 I can't wait to come back to Little Rock so I can try more food from Three Fold!

Three Fold is located at 215 Center Street in downtown Little Rock. Here's the website.
Posted by Bianca at 9:48 PM

Yay!! You finally got to try Three Fold! It's so great. Man, now I want dumplings. A pro-tip for the restaurant is they'll do halfsies on the noodles and dumplings, so you can request a half noodle, half dumpling bowl, if you just can't choose. Also, the carrot slaw is killer. Yep, now I need dumplings in my life.

*cries* I want all these foods~! The taro chips sound amazing, I miss taro so much.