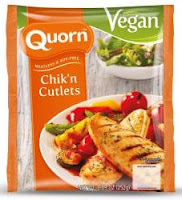 Most Quorn products are not vegan, but the U.K.-based mycoprotein plant meat company has been putting out more and more vegan options in recent years. They sent me their vegan Quorn Chik'n Tenders and Chik'n Cutlets to review!

Before we get started though, you might be wondering what mycoprotein is. It's a single-cell protein source that comes from fungus, and it's grown in large vats. So basically, it's science. And it's a great vegan protein option that's fairly low-cal, low-carb, and low-fat. If you're one who counts your macro intake, it's worth noting that the numbers on this stuff are pretty awesome. But the products do come with an allergen disclaimer — apparently, about 1 in 140,000 people have a serious allergic reaction to mycoprotein that can result in vomiting and nausea. 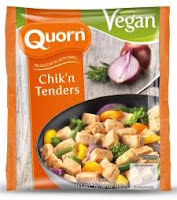 Thankfully, I'm not one of those people, because I LOVE the vegan Quorn products. The Chik'n Cutlets come four to a package, and they're unseasoned and frozen. Each one is about the size of a hand. For these, I wanted to experiment with a recipe from Quorn's website, so I scrolled through until I found this Quorn Caesar Salad.

The salad recipe isn't vegan on their site, but I made a few easy substitutions. For the egg yolk called for in the dressing, I used a 1/2 teaspoon of Vegg powder mixed with 1 tablespoon of water. The dressing also calls for parm, so I used the new Follow Your Heart vegan parm shreds. I also cut back the oil pretty significantly from 3/4th cup in the dressing to two tablespoons. I love oil, but 3/4th cup is way too much.

I pan-fried the cutlets and baked some bread cubes tossed with Miyoko's VeganButter and fresh garlic. Then I chopped the chik'n, tossed everything with dressing, and dinner was on the table. This truly tasted like the Caesar salads I loved as kid, and the unseasoned cutlets soaked up the dressing. 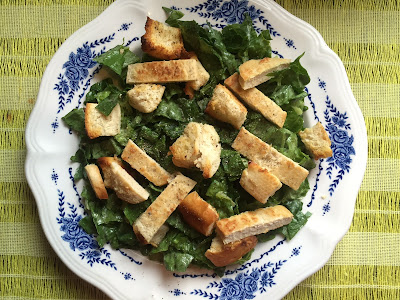 For the Chik'n Tenders, I wanted to develop my own recipe, so I came up with a simple and wholesome Quorn & Veggie Stir-fry. 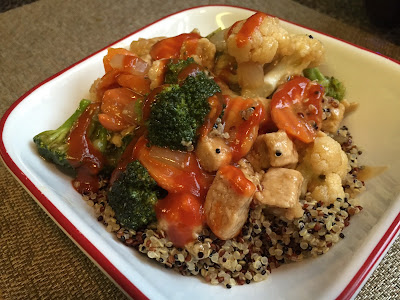 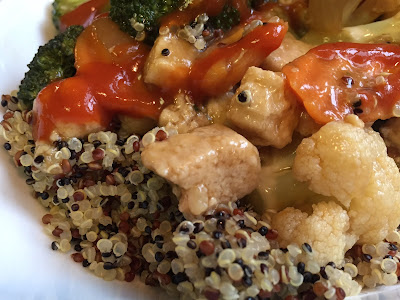 The tenders are basically the same as the cutlets, but they're already chopped into bite-sized pieces. Again, they're unseasoned. But they easily soak up any sauce they're cooked in or tossed with. The sauce for this stir-fry was so flavorful, and it went right into the tenders.

Heat the 1/4th cup water in a large skillet and add the onions. Cook and stir for about 2-3 minutes or until onions are soft. Add the broccoli, cauliflower, and carrots, and more water if needed. Continue to simmer over medium heat for about 5 minutes.

Add the Quorn tenders, and cook and stir for about eight minutes, stirring occasionally, adding more water as needed to keep the food from burning or sticking to the pan.

While the veggies and Quorn are cooking, whisk together the 1 3/4th cup water, soy sauce, rice wine, hoisin, sesame oil, garlic, and ginger in a small bowl. Spoon a small amount out into another small bowl and stir together with the cornstarch until its dissolved. Add the cornstarch mix to the bowl of sauce and whisk to combine.

Pour the sauce over the veggies and Quorn as they're cooking in the skillet. Allow the sauce to thicken, stirring occasionally. Depending on how high the heat is, this can take a few minutes. The end product will be saucy but thick. Serve over brown rice or quinoa.
Posted by Bianca at 10:06 PM

We only have the non-vegan Quorn here, which is frustrating because when became available here supermarkets started stocking a lot of it and pushing out other brands of mock meats that were vegan. I really hope we have some vegan Quorn here eventually! And that I am not that 1 in 140000!

I used to love Quorn products when I was a vegetarian, so I'm so happy they're coming out with more vegan options!

I remember my sister introduced me to Quorn when she was vegetarian and I was so bummed to find out that they weren't vegan! I am excited to see they now have some vegan options. I will definitely try them out when I see them!