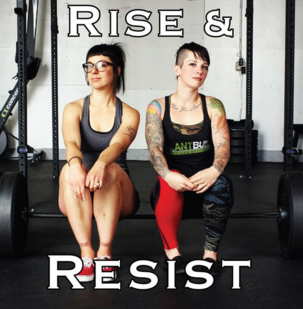 I recently discovered the Rise & Resist podcast. It's a show about veganism, feminism, body image, and fitness hosted by rad vegans/fitness coaches Lacy Davis and Holly Works. And I'm kind of obsessed. The show has been running for more than a year, so after listening to a couple new episodes and deciding that I loved it, I'm now going back and starting from the beginning. I've literally listened to an episode almost every day for two weeks (and more than one episode on a couple days where I had road trips).

I actually saw Lacy speak on a Vegan Fitness panel at Vida Vegan Con in Austin last year, but somehow, I didn't realize she had a podcast until I read about it in the new Driftwood Magazine (issue #2 is out now!). Lacy overcame an eating disorder in her 20s, and now she's a CrossFit champ and Olympic lifter. Holly power lifts, owns a plant-based gym in Oakland, and runs her own protein waffle company called FitQuick. 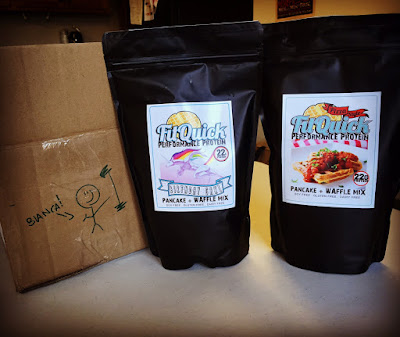 I'm not a lifter (yet!), but I'd like to get into that someday. I am a runner though, and for years, I've been enjoying protein-packed smoothies (usually made with Vega One, Plant Fusion, or Manitoba Harvest protein powders) after my runs. And I'll probably never really tire of smoothies (or smoothie bowls!), but since I run four days a week, I've thought that it would be nice to mix things up. I could probably make my own protein waffles using the powders in my pantry, but I doubt they'd be as good as the FitQuick mix because Holly is a waffle pro (and former chef).

Each serving of FitQuick has 22 grams of protein, and they're soy-free, gluten-free, and vegan (duh). There are all sorts of amazing flavors on offer, but for starters, I picked Birthday Cake and Pizza! Seriously, PIZZA WAFFLES, y'all. I love a good savory breakfast, so these are a nice change. In one of the older podcasts I listened to, Lacy suggests stuffing your pizza waffle by pouring a little batter in the wafflemaker, adding pizza toppings, and topping with more batter. 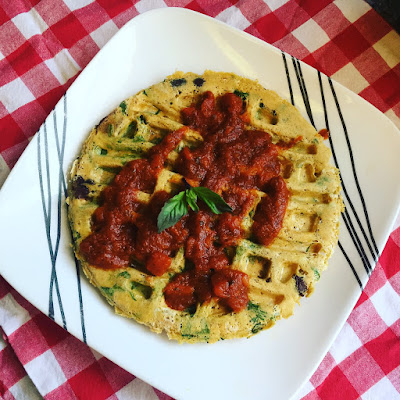 So that's what I did! My Pizza Waffle is stuffed with Daiya mozzarella, chopped spinach, and chopped kalamata olives. And I topped it with pizza sauce. THIS WAFFLE WAS THE BEST THING EVER. Seriously.

I just had to order the Birthday Cake Waffle mix because the package has a unicorn. And everything is better with unicorns. The mix is loaded with rainbow sprinkles, and it actually tastes like birthday cake! I had one this morning, and I topped it with Miyoko's Creamery Cultured VeganButter, maple-agave pancake syrup, CocoWhip, and more sprinkles. 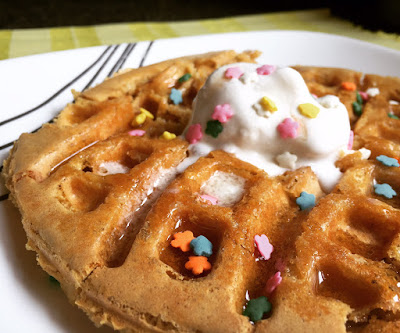 I partied like it was my birthday at breakfast this morning. For real. It's really hard to believe this is health food! I mean, I added vegan butter and syrup, but they were the kind with the highest quality ingredients.

FitQuick Waffles are pretty much my new favorite thing, and eventually, I want to try all the flavors! They also come in Dark Chocolate Raspberry, Lemon Poppyseed, Java Chip, Double Chocolate Brownie, and Vanilla.
Posted by Bianca at 9:25 PM

I am the biggest of fans and so honored you like our podcast!

Oh my gosh these look amazing!!!! I would never think of a pizza waffle but that is genius!! The birthday cake waffle looks so amazing too. Once I get back into my fitness routine I'll have to check these out!

That pizza waffle looks amazing!! Thanks so much for turning me onto Rise and Resist! I'm listening right now, and I love it.

awesome post! I love R&R so much - I"m a podcast maniac, and I love those two gals so much. I've been interested in these waffle mixes, but your enthusiastic post might just tip me over the edge. PIZZA WAFFLES? I mean, come on.

I didn't know Lacy Davis has a podcast! I love her!

So awesome! I haven't listened to the R&R podcast yet but I read Lacy's blog and she's super cool. I love the idea of these waffle mixes especially the Pizza kind - yum!!

Oooh the pizza waffle!! What a fantastic idea.
Birthday waffle is really cute, but maybe a little too sweet for me in the morning. my waffle iron is sorely underused.

I wish I could get these... I mean right now in my life I can justify dropping $50 (with shipping) for a total of 16 waffles.. especially since I need to buy a waffle iron. XD A girl can dream right?

Jennifer, I totally agree! It's definitely not really in my budget either. I was only able to justify it because I spend a ton of protein powder anyway. A $30 tub of Vega One has 11 servings, so I figure that's close to the same. But it was for-sure a splurge!

Bianca, you can get a better deal on protein powder through TrueNutrition.com - they have lots of vegan proteins and supplements. Their customer service is super quick to answer emails about whether products are vegan. They just started flat rate shipping too.

The serving size on the bag says 2 scoops (to make 2 waffles) for a total of 8 servings. You can stretch it by making 1 waffle instead of 2.

Thank you for sharing about this podcast! I love it so much and have been listening to it ever since I read this post.