As I've mentioned before, I'm embarking on a 30-day cleanse using Brendan Brazier's Thrive Forward plan beginning January 3rd. Until then, I'm eating as much of all the foods that are forbidden as I can. The Thrive Diet is free of processed foods, refined sugar, caffeine, gluten etc. Plus, it's heavy on raw foods. You know the drill.

Anyway, I'm not giving up those things forever, of course. But even 30 days sounds like forever when it's staring you in the face. So I'm living it up until New Year's Day. Every week, I make a big batch of something to warm up for breakfast. Since this is my last week of work before holiday break (we're off from Xmas Eve to New Year's Day ... with a brief work day on New Year's Eve), this is the last week for regular breakfast. Next week, I'm sure I'll be sleeping in and eating ramen for breakfast everyday, but that's another post.

What did I choose for the last regular weekday breakfast? Breakfast Burritos! 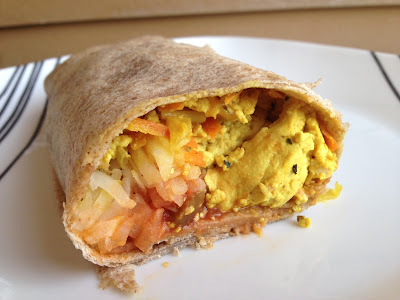 God, I love burritos stuffed with tofu scramble and vegan cheese. I've shared a breakfast burrito recipe with you before, but that one involved cooking fresh potatoes and it was way back in 2010. This one is quite similar, but it's easier because I use frozen hash browns.

Prepare tofu scramble according to directions listed here. Set aside.

While the scramble cooks, spray a little nonstick cooking spray in a medium skillet. Heat on medium and add hash browns. Cook uncovered and without stirring for 10 minutes. Stir and cook until soft and lightly browned. Sprinkle with seasoned salt. Set aside.

Heat one burrito wrap in the microwave for about 20 seconds to make it easier to fold. In the center, fill with 1/4 batch of the tofu scramble. Measure 1/2 cup of hash browns and place those on top of the scramble. Top with Daiya and salsa.

Fold, wrapping the two ends in first and then rolling up. I like to put my rolled-up burrito back into the microwave for about 25 seconds to help melt the Daiya.

Repeat with the other three burrito wraps. Or save the leftover filling and make a single burrito each morning.
Posted by Bianca at 10:25 PM

I was thinking of doing a cleanse soon, but probably in February. I hadn't considered following The Thrive Diet, even though I love it, but maybe now I will!
And then I can just copy the awesome food you make, haha.

Ha ha ha ha, I'm glad to know I'm not the only one who likes the sleeping in/eating ramen combo. Especially after a beer night! Also, I signed up for that thing too because why the hell not. Though I might not start until the 4th (the 3rd is my last day in Regina!). At least it'll be easier to find awesome fresh food in Texas!