There's a new Venezuelan restaurant in town called Arepa & Salsa. My friend Leslie asked if I wanted to join her there for lunch yesterday, and to be honest, I had no idea what Venezuelan food was. So I googled the place and found a picture of their menu on Urban Spoon.

At first glance, the place seemed very un-vegan friendly. Every dish on their two-page menu contained meat. Leslie's vegetarian too, so I sent her this frantic text message: 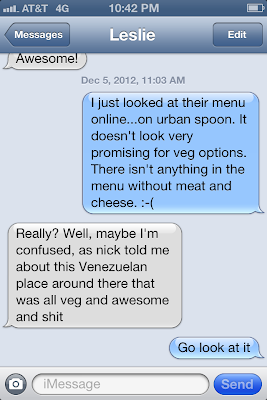 But as you can see, our vegan friend Nick had already eaten there and had determined that it was "awesome and shit." So I texted Nick to ask what we could eat at Arepa & Salsa. He suggested we tell our server we're vegan (Leslie is technically vegetarian, but she eats vegan most of the time) and that we ask for the "plantain sandwich." Now as a lover of all thing plantain, I was convinced.

Once seated inside the small diner, we informed our server that we were vegan. She was very helpful and suggested the De Pabellon without meat or cheese. That's a sandwich made arepa (a corn dough bread) stuffed with black beans and plantain. Leslie asked if we could add avocado. Here's what we were served: 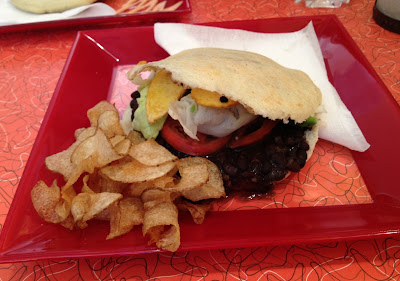 OMG! This was my dream sandwich! Plantains, black beans, avocado, tomato, lettuce!! And the arepa ... oh my! It's like a pita pocket made from a thick tamale-like bread. Genius. I'll be coming back here often for this sandwich. I can't even describe how amazing it was. I ate every last bite even though the thing weighed a couple of pounds. I was way too stuffed when I returned to work, but it was so worth it.

One thing to note: My sandwich arrived with a creamy sauce on it. I asked the server if it was dairy-based, and she confirmed that it was. So even though I didn't know to ask for that to be left off, they made me a new one! Great service. I'll be sure and ask them to leave that off next time.

Nick says the tostones cups with plantain are also vegan. And the server informed us that they can also add eggplant to an arepa by request.

Wow, that sandwich is full of so many wonderful things! It looks delicious.

Wow, that's layers and layers of everything I love! Plantains on a sandwich? Sign me up!

Looks tasty. but if you told the server you were vegan seems odd they put the cream sauce on it.

I just found out about this place last week myself. It's definitely on my list for when I'm in Memphis next week. I LOVE VENEZUELAN FOOD! And I've only had good Venezuelan food in NYC. I make arepas at home, but they're just not as good.

So glad you liked this place. I saw a lot of meat on the menu, but I figured it would be veg-friendly.