Cassi sent out invites in November, and without really paying much attention to the rules, I eagerly RSVP-ed. Well, let me share with you the rules of Christmas Cookie Club, which Cassi took straight from the book: 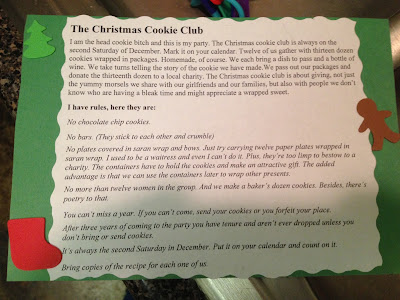 I decided on the Cool Lemon Cookies from Vegan Food Gifts by Joni Newman. The cookies are supposed to describe your year, and my year was all about the summer. I bought my first house and published my first cookbook this summer. And nothing says summer like lemon. Plus, I knew these cookies would be fairly inexpensive to make in a large quantity since they're free of nuts and other pricey ingredients: 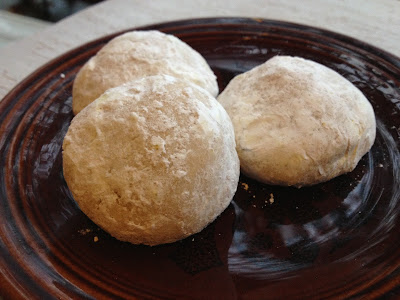 These are amazing! The cookies are soft but substantial. They don't crumble or break. There's lemon extract in the batter, and they're rolled in a mixture of powdered sugar and unsweetened powdered lemonade mix. Yes, friends, the cookies are rolled in Kool-Aid. Does it get any better than that?

Here they are all packaged up and ready to gift: 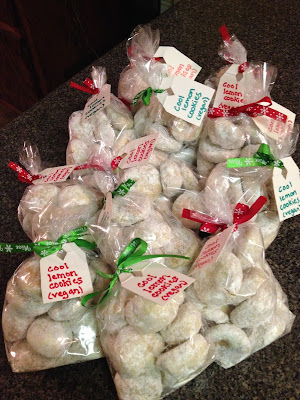 The party was Saturday night. We had lots of wine and plenty of snacks. I brought a Spinach Artichoke Dip that I'll blog about tomorrow night.

Now, Cassi is not vegan. And only one other vegan lady was invited. But so many people brought vegan cookies, just so Stephanie and I could eat them too! Each lady went home with 12 dozen cookies, and the 13th dozen is going to a charity.

While some of the cookies were not vegan, look at all that were! 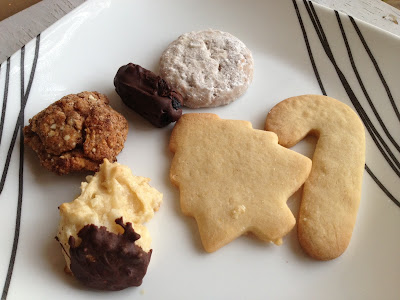 Now I have a bajillion cookies, so I'll be sharing plenty with my co-workers tomorrow. They can have all the non-vegan ones, but I'll be hoarding a few of the vegan ones for myself.
Posted by Bianca at 11:04 PM

So awesome! Sorry you had to make so many cookies, but what a great idea! And you at least get to leave with as many as you made right? *EAT ALL THE VEGAN COOKIES!!*

I looove lemon drop cookies. Nice choice. Did you double the recipe at all, or not risk it and actually clean up and bake 13 separate times??

That sounds like an amazing party, even if that's a lot of work.

how fun, and sooo super cool that lots of other non-vegans made vegan cookies too. mmmm..... cookies!

The recipe actually makes 30 cookies, so I baked 5 separate batches. I get nervous about doubling. :-/

I would have been so upset by that invitation because I love this kind of thing but a dozen from each person is both too much to make and to get! But it sounds like you and the rest of the group really worked it out with aplomb.

Still, I'd have been that one whiny friend was like, "Can't we make 3 for each person and also 3 for charity and make one nice gift box to a charity of our choice?" And then I'd add a whiny "Huh, why can't we, why can't we, huh?" at the end for good measure.

And so nice that other people made vegan cookies!