Last night, I blogged about my friend Cassi's Christmas Cookie Club party. Well, in addition to requiring all 12 ladies who attended to bring 13 dozen cookies, Cassi also asked us to either bring wine or a dish to share.

I figured there would be plenty of wine, but I was worried about vegan food options since only one other girl was vegan (and I knew she was bringing wine because she said she didn't have time to make anything). And by the way, in case you're wondering, I only buy vegan wines when I'm buying, but I won't turn down a glass of any wine unless I'm certain it's not vegan. Probably not the best policy, but it's what I do. Sorry, vegan police.

So anyway, I whipped up a quick Spinach Artichoke Dip, which I'll be using for the 1970s chapter of my new cookbook project: 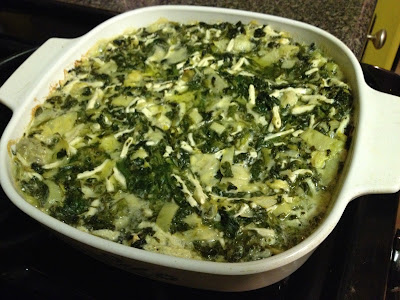 It was my first stab at spinach artichoke dip, but I think it was pretty damn good. All the omnis at the party loved it, and Cassi's nine-year-old kid (who has decided recently that he's a vegetarian) loved the leftovers. Score.

I'm trying to eat as much junk food as possible over the next few weeks (although this is KINDA healthy because it's loaded with spinach and artichokes), because I always do a rigorous cleanse in January. This year, I'm embarking on Brendan Brazier's (you know, the Vega guy) Thrive Forward plan. It's free, and it's personalized to your needs, whether that's weight loss, more energy, more sleep, or just adopting healthier eating habits. If you want to Thrive with me, you should check out the Thrive Forward website, watch the intro video, and sign up! It starts on January 3rd.

Until then, let's eat vegan junk food! Here's the recipe!

Mix everything together in a large bowl. Transfer to the casserole dish and bake for 30 minutes.

Serve with tortilla chips or crackers.
Posted by Bianca at 9:54 PM

That look dip looks amazing. What did you dip into it? Veggies or crackers or something else?

Also, I love the attitude of having to eat as much junk food as you can now. :-)

Yeahhh...I admit that I should probably do the same thing. Though since I'm going to be living in Austin, I'll allow myself to cheat once or twice to eat at a kick-ass food cart. :) Gonna check Thrive Forward out, <3 Brendan Brazier!

That looks like a very good recipe -- and pleasantly simple! I will check out Thrive Forward.

Get your own home based job in data entry, copy pasting, clicking and different more jobs
www.jobzcorner.com

I love, love, love spinach artichoke dip. My mom always made it when I was a kid and put it in a hollowed out pumpernickel bread bowl and used the bread chunk "innards" as dippers. Well, I had a huge early family Christmas dinner at my grandparent's house this weekend while I was back home in Pennsylvania. What did I make that my meat-eating family would love and not frown away from ... spinach artichoke dip! I found the Trader Joe's brand of their non-dairy cream cheese substitute, vegan mayo, vegan sour cream, marinated artichokes, a veggie dip mix and frozen chopped spinach. It was topped with shredded mozzarella Daiya. We doubled the recipe, because well, I have a huge family! I mixed everything up in advance and it fit into a two-quart casserole dish. I baked it at my grandparent's house just before dinner so it was a nice, warm appetizer. Yes, my family ate almost all of it! And, the best part of all was that there was one HUGE pumpernickel bread bowl, that was veg-friendly, freshly baked and waiting for me on the shelf at my local grocery store back east. Thanks for this recipe, it is simple with its ingredients and I think I might give it a try. Sorry for the long winded comment, but I love reading your blog!

I am making this dip as I type! :) Thanks for the recipe!

One of my favorite dips that I stopped eating when getting rid of dairy. Thank you for posting this.