Yesterday, I blogged about the first day at Memphis' first annual Plant-Based Food Festival at TO Fuller State Park, so check out that post to get caught up if you missed out. Tonight, I'm sharing pictures from Saturday (Day 2).

I had another meeting that morning, so I missed the early activities. I arrived just in time for my 4 p.m. cooking demo. I made BBQ Tempeh & Carrot Sliders with Creamy Poppyseed Coleslaw (both are recipes from my very-soon-to-be-released cookbook, Cookin' Crunk). I forgot to ask anyone to take photos with my iPhone, but my friend Vaughan used his camera. Unfortunately, the picture quality isn't so good. But you get the idea: 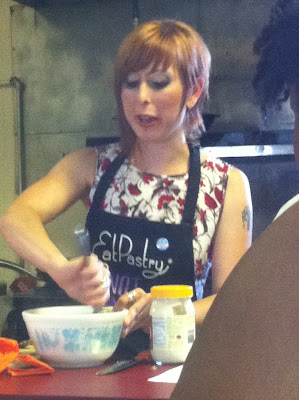 I also failed to take any photos of the sliders since they were all gobbled up so quickly. I even made my own vegan slider buns using an altered version of this recipe. I looked all over and couldn't find storebought vegan slider buns (all contained eggs for some reason) so I had to make my own.

After my demo, I caught a funny and informative lecture about live foods from Brother Franco, a legendary Memphis vegan health guru. Next, I watched Chef Nigel's cooking demo. He made these delicious Sauteed Veggie Sandwiches with peppers, mushrooms, onions, tomato, and vegan mayo. I didn't photograph those, but next up was his Curried Faux Goat Wrap: 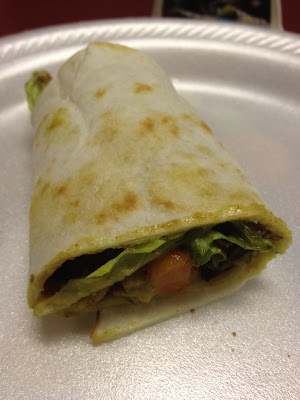 Yes, I said "goat." Since Nigel is from Jamaica, he grew up eating goat. So he calls this wrap "goat" even though it's made with curried potatoes, carrots, and TVP. The TVP is the large chunk size, so it could be the same shape and texture as goat. I wouldn't know. It could also pass for chicken. Either way, this wrap was out-of-this-world!

And then I grabbed some quick dinner from Imagine Vegan Cafe's booth. They were selling a few quick grab-and-go items from their regular menu, like this Eggless Egg Salad Sandwich: 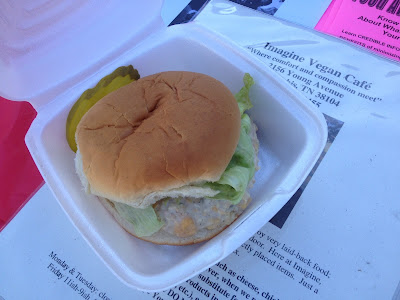 I just love this sandwich! They sell it in the restaurant too. It's made from chickpeas and vegan mayo, and it's one of the few gluten-free items on their menu (eaten without the bread, of course!). Not that I care about gluten-free, but it's nice that there's a few options for the xgfx vegans.

By this time, the festival was drawing to a close. I ate my sandwich and watched this reggae band before heading home for the evening. 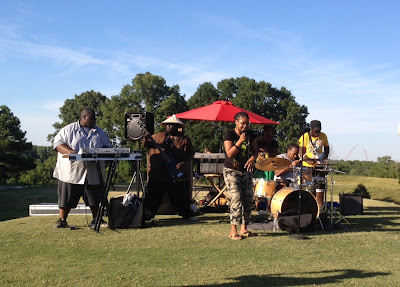 I really hope everything works out for the festival to go on again next year!
Posted by Bianca at 11:20 PM

Looks like another great day! Very cool that you did a demo and the recipe sounds delicious! :)

What a bummer about finding slider buns. The bakeries in 2 of our local stores both make a bunch of bread/buns that are vegan, and sometimes they have sliders, so I guess I'm lucky. Can't wait for your cookbook!

how cool that you did a demo! awesome! sounds like a great day!

Looks like a really great event, with lots of good food and fun!

Looks like a fun day! You look so cute :)

I haven't had curried "goat", but I did eat a lot of curried potato wraps one winter in Antigua. Talk about a trip down memory lane!