So Xmas has come and gone once again, and like most years, this one went pretty well. I started the holiday on Xmas Eve in Arkansas at my parents' house. We open presents on Xmas Eve, so my mama, daddy, and I took turns opening gifts. Oh, and my doggy Datsun and one of my kitties Akasha were there too, and they got a few gifts.

My biggest gift was actually monetary. My parents offered to help me pay Datsun's medical bills after his recent stomach surgery. They also gave me lots of clothes, two seasons of Seaquest DSV on DVD (yes, I'm a super nerd), Vegan Pie in the Sky, a new copy of Vegan Cupcakes Take Over the World (my old one was falling apart from overuse), the Happy Herbivore 2012 calendar, and this awesome Mio Active Heart Rate Monitor: 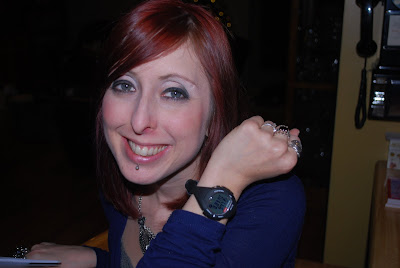 This monitor not only measures active heart rate, but it also acts as a pedometer and measures calories intake and output. I've been wearing the monitor since Xmas Eve. I've only been taking it off to shower. I've even worn it while sleeping, and I've actually been burning calories in my sleep! I burned 33 calories last night, and according to the pedometer function, I took 803 steps in my sleep. I've been told that I kick in my sleep, and now there's proof.

After we exchanged presents, I met up with my BFF Sheridan (she blogs at Vegan In Arkansas ... check it out), whose family also lives in Jonesboro. She gave me Vegan Diner (yea!), salt and pepper shaker wands (magical!), and framed pictures of us from her wedding. I gave her a jar of my green tomato chutney, the Complete Guide to Vegan Food Substitutions, and Vegan Pie in the Sky: 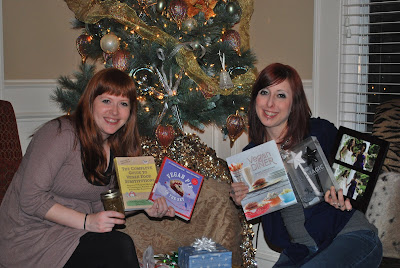 On Xmas morning, my family always has a big ole breakfast. It's usually at Granny's house, but my Pa was in the hospital over Xmas. So mama took on the cooking duties this year. Here's my plate — Tofu Scramble, Veggie Bacon, Biscuits & Gravy, and a Hash Brown: 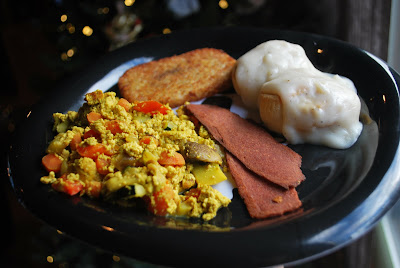 After breakfast, I made the five-hour drive to Lewisburg, Tennessee where my partner Paul's parents live ... only it took me seven hours to get there because I got way lost. I completely forgot to photograph dinner, but I had Field Roast Smoked Tomato Quarter Loaf (which I brought with me from Memphis) with sweet potatoes, a baked white potato, and green beans. Paul's mom cooks everything with meat juice, but she always pulls me out a few veggies before the animal fat is added.

I got two pairs of PJ pants, some iTunes gifts cards, and some much-needed bath towels from Paul's family. I didn't take very many pictures there, but here's one of me and Paul in front of the Xmas tree. 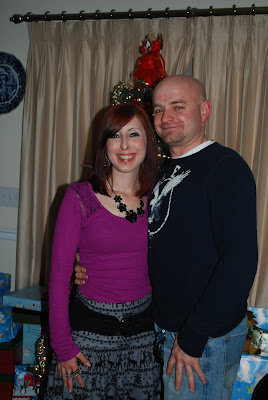 What was your favorite Xmas gift this year?
Posted by Bianca at 9:31 PM

803 steps?! Jeez, that's like a mini-stroll. And I always fail at having my camera handy for important events...ah well. You and Paul look super jolly. Happy holidays!

Love the pics of you and your BFF and Paul. Hope your PA is doing ok. Your blog inspires me daily, so Thank you. My favorite pressies, well, DH got me a beautiful Noble Xmas tree, (just brought it home while I was napping a week or so ago :)) new tires for my Explorer, plus he never complained when I blew my overtime pay on a Vitamix :)

Lovely post :) My favourite gift was a table, for sure. Can't wait to buy all kinds of e-books now to read on it!

Wish you a great New Year!

We're Buddhists so we don't really do presents but we did go to Dave's mother's home in Florida and I got to make the majority of the Christmas Eve meals -- which means it was an 80% vegan meal! That was a wonderful gift!

it sounds like you had a great christmas! although, i'm sure getting lost on the way to paul's parents house wasn't too fun. i want your heartrate/pedometer!

also, i hope you do a lot of posts on your new cookbooks! i didn't get any this christmas, so it'll be good to see which ones spike my interest before i buy them for myself ;)

Yay for a Happy Xmas! I hate it we didn't get to hang out longer, but hopefully I'll see you again soon! Looked through my new cookbooks as soon as we got home! I can't wait to make all kinds of things!

Do you think the calorie counts are accurate? Seeing as you count calories already, I'd love an update on how well the gadget works, if you have the time/interest.

Oh man those salt and pepper shakers are awesome!

I also got a copy of Vegan Pie in the Sky and I'm WAY too excited to bake from it!

I use to live near Lewisburg! I spent my Christmas in TN too. I got so much neat bakeware at a small thrift store there.

I bet I'm your only reader who knows where Lewisburg is. LOL. Good old Marshall County.
I hope your pa is ok!!

Belated Merry Christmas to you! All your presents sound great, love the magic wand s&p shakers.