I had the pleasure of meeting long-time blogger crush, Dynise Balcavage, at Vida Vegan Con this year, and I must admit, I was a little giddy to meet someone whose blog I've been drooling over for years. Dynise led a workshop on how to spice up our food writing by using more descriptive terms for food, rather than easy fallbacks like "yummy" or "delicious." And even though I'm a news writer by day, I still have problems over-using those generic terms. Although I'm still guilty, at least now I always hear a tiny Dynise voice encouraging me to be more descriptive every time I post. 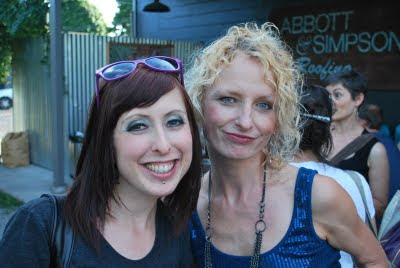 I bought her first cookbook, Urban Vegan (which shares a title with her blog), as soon as it came out, and I've been eagerly awaiting her second book, Celebrate Vegan: 200 Life-Affirming Recipes for Occasions Big and Small. When she offered me a copy for review, I jump 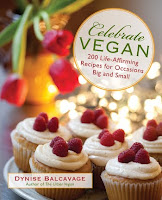 ed at the chance. I love seasonal cookbooks, especially ones that focus on holidays. I'm a bit of a holiday whore, who puts way too much emphasis on celebrating every little special day.

This book features recipes for, not just the big holidays like Christmas and Thanksgiving, but all the tiny ones in between. There's recipes to make on World Vegetarian Day, Memorial Day, MLK Day, as well international days, like the Buddhist holiday Vesak, the Ethiopian celebration of Timkat (mini injeras!!!), and the Hindu Diwali. There's even recipes for generic occasions like grown-up birthdays, funerals, and girl's nights in.

I hosted a holiday potluck at my house on Saturday, and I chose three dishes from the section on winter religious holidays. I made the Brown Rice Christmas Maki from the Christmas Eve chapter: 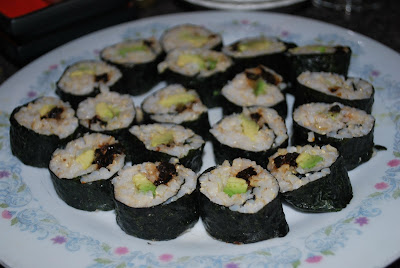 This sushi is made with green avocado and red sun-dried tomatoes for that special Christmas effect, but my tomatoes looked a little more brown than red. All of Dynise's Christmas Eve entree recipes are grain-based as a vegan-friendly spin on the European Christmas tradition of the "feast of the seven fishes." Rather than serving seven fish-based meals, Dynise suggests serving seven grain-based ones. This sushi was one of the seven.

I also made some Peppermint Bark, using vegan white and dark chocolate: 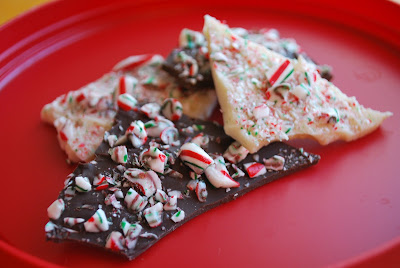 This was also in the Christmas Eve chapter, and it was so easy! I just melted chocolate, stirred in a little peppermint extract, spread it onto a cookie sheet, and sprinkled on crushed candy canes. The result was a melt-in-your-mouth minty fresh sweet treat.

Since it was a holiday potluck, I also wanted to make something from Jewish tradition. So I chose this Rue des Rosiers Pain D'Epices from the Hanukkah section: 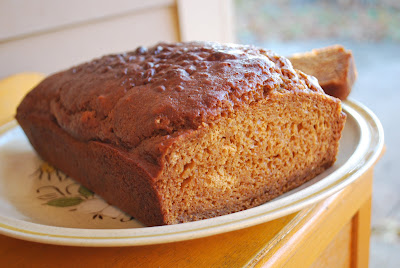 This spiced gingerbread is traditionally sold in bakeries throughout France during the holiday season, and Dynise said it's especially popular in Paris's Jewish neighborhoods. I served this with homemade orange marmalade (a gift from my friend Stephanie) and Earth Balance. The bread was moist and perfectly spiced with hints of ginger, cinnamon, and cloves.

I'll post pictures from the rest of the potluck tomorrow. We had quite a spread! But I wanted to focus solely on the dishes from Dynise's book in this review.

I'll certainly be referring to Celebrate Vegan for every tiny holiday that comes around. The Chilled Pea Soup with Mint and Garlic Scapes will be the perfect way to celebrate Earth Day. Cinco de Mayo won't be complete without one of Dynise's Easy Watermelon Daiquiris, and before this holiday season is over, I might just make Prismatic Wild Rice Salad and Noochy Broccoli for Festivus, the anti-consumerist holiday celebration invented on Seinfeld.
Posted by Bianca at 8:14 PM

I LOVE Dynise and LOVE both her books. I just made the Sesame Seed Cookies from the Purim section of Celebrate Vegan last night - been eating them with peanut butter, yum!

Looks great, must check this book out.

I adored her first cookbook and I am dying to get the next! I plan on stocking up on vegan cookbooks when I get back to the states. Everything you made looks great!

The sushi and bark are absolutely beautiful!! I want to buy the book today and learn to cook these recipes for my holiday party as well! Thanks!!

I was lucky enough to test for this book so I've already cooked more out of it than I have almost any other of my cookbooks. I definitely recommend the Wild Rice Prismatic salad; I made it twice in a week!
The sushi came out beautifully.

I just got Dynise's first book this fall, and I must admit this new book looks fun too. I like how there are recipes for other holidays than the big ones (cinco de mayo, etc.).

Those all look great. This book is actually on my Amazon "cookbooks" wishlist.