Breakfast really is the most important meal of the day for me. I always wake up famished, and I must eat within an hour of waking or I feel like I'm going to die. So I prefer a hearty breakfast over a light one. Savory, warm morning meals are the way to go.

And while I love tofu scrambles and hash browns and the occasional bowl of peanut butter oats, nothing beats Biscuits & Sausage Gravy: 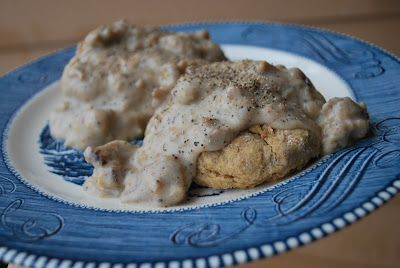 I used my recipes for Whole Wheat Buttermilk Biscuits and Sausage-Sage Gravy, both from my upcoming Southern vegan cookbook (due out in April). Simple, hearty, delicious. The sausage bits in the gravy are made from crumbled Gimme Lean, by the way. To make this breakfast easier, I make a batch of biscuits and a pot of gravy on Sunday night and re-heat each weekday morning. Since the gravy thickens in the fridge, I add a little soymilk or almond milk when I re-heat individual portions in the microwave.

At Imagine Vegan Cafe, Memphis' only vegan restaurant, they serve something called the Memphis Slam at brunch — biscuits topped with gravy, tofu scramble, sausage, and their homemade vegan cheese sauce. Nothing beats that breakfast. 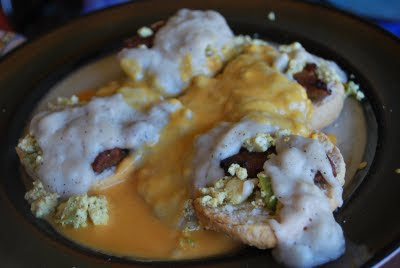 What's your favorite breakfast?
Posted by Bianca at 11:39 PM

I love waffles and tempeh bacon, but that's a rare occurrence. I wake up feeling famished too!

I've never had biscuits and gravy for breakfast! I only heard about the existence of biscuits a couple of years ago, actually. We don't eat them in Québec.

I prefer savory breakfast... I guess my ideal plate would have tofu scramble, a toast with Earth Balance, baked beans and a salad.

I typically eat oat bran with a bit of prune juice, flax seeds, flax milk and peanut butter mixed in. Very good. Sticks to my ribs.

However, I MUST MUST MUST get to Memphis SOON and try that brunch. Oh my gosh... looks amazing!

I guess I'm a light breakfast kind of gal... I usually make a spinach drink and eat an apple on the way to work!

PS- Let me know if you got the pinterest invite!

Looks soooo good! Might have to make this tomorrow morning! I'm a protein junkie, and if I don't get protein / a good savory breakfast in I too feel like I'm going to doe. BTW, when is your cookbook going to come out?

I'm the same way with breakfast. Sometimes I will get on a kick for a couple of days of being motivated enough to eat only fruit or a smoothie, but I don't know how all of these people do it long-term. I love french toast, pancakes, tofu scramble, and biscuits & gravy, although we only have those occasionally. I usually have oatmeal with lots of toppings.

BISCUITS AND GRAVY OH MY GOD!!!

When will we see your book on Amazon?

Hey Julie and Lee Ann, the book is due out in April, but I've not been given an exact date yet. It was supposed to be January, but it got pushed back at the publisher because they have a lot of books in the works right now and a small staff.

I'll definitely be blogging about the release when it happens though! Probably so much that you'll be sick of hearing about it...

I'm so excited for your cookbook! I know every recipe is going to be absolutely delicious.

I can see why that would be your favorite breakfast. And to think, I had never heard of such a thing until I went south.

That Memphis Slam looks like bad news. I'm actually glad i live no where near that as Id probably eat it much too often.