I'm always a few weeks behind whatever's cool. You can blame Memphis for that. They (whoever "they" is) say this city is about 10 years behind. So don't hold it against me that I'm just now eating lots and lots of pumpkin. I meant to get into pumpkin before Thanksgiving this year, but it didn't happen. Now it's coming on with a vengeance.

After yesterday's pumpkin cookie teff porridge, I was still hungry for the mushy orange stuff. So I made this Pumpkin Soup with Tarragon & Sherry from Veganize This! 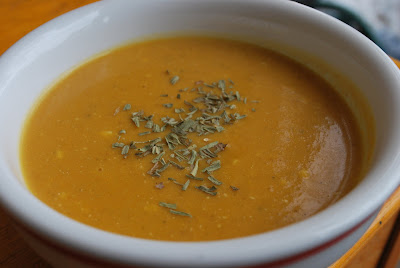 I love this book because Jenn Shagrin is one of the funniest people on Earth. But she's also a gourmet chef, and many of her recipes initimidate me because they have long, fancy-sounding names. You know the recipe names that list off most of the recipe's ingredients? Upon reading them, some are genuinely difficult or time-consuming. But most are actually pretty easy and quite innovative. Jenn's a genius, for reals.

She's been going through some really hard times lately after having her identity stolen. She wrote about it on her blog Veganize It ... Don't Criticize It, but there's been no update since August. I hope she's doing okay. Jenn's an awesome lady and one of my favorite bloggers.

This recipe was one of the simpler ones in the book, and I even cheated on it. I used canned pumpkin instead of fresh. I skipped the toasted pumpkin seed garnish (because I didn't have any) and I used dried tarragon instead of fresh herbs because I'm cheap. But this soup was still amazing, even without the fancy flair. It's made with MimicCream, but you could substitute almond milk. I just happened to have a carton of MimicCream I'd been hoarding for the right recipe.

How have you been eating pumpkin this fall (and yes, it's technically still fall even though it FREAKIN' snowed here in Memphis today)?
Posted by Bianca at 10:13 PM

Jenn Shagrin has some WILD amazing recipes. I want to make her vegan goat cheese one day!
The soup looks great. I have been eating lotsa pumpkin but not as a soup, though that's one of my favorite ways. I have a leftover pie crust from Thanksgiving that I'd love to make into pumpkin pie.
As for your snow, I am Jealous! It snowed in New Mexico and that's a dessert! New York needs to pick up the pace!

Oh my gosh, I made this soup yesterday! I ate leftovers tonight for dinner. It was really delicious. I love Jenn's book and her blog. I've made a ton of her recipes and I seriously love them all. She's a genius. I hope she does another book. :) And I am excited to buy your book too when it comes out.

That soup looks so delicious! My interest in pumpkin waned in early November, but it's picked up again lately. I've been enjoying it in smoothies and in my morning oatmeal.

i've been going pumpkin crazy, too! i swear, since mid-october, nearly every week i've been making at least one thing that contains pumpkin.

and what is mimic creme? is it kind of like coconut milk?

I love pumpkin so much!

I'm still hoping to get onto the pumpkin bandwagon back in the US... its too time-consuming to always make it from scratch. This soup looks delicious!

@caitlin mimic-creme is a bunch of nut milks blended... almonds and cashews i think... its starting to become more popular. i used to have to order it from cosmos but now i can get it at whole foods... jenn's book describes ways to "fake it" though so thats' good. it's her fave ingredient tho so if you use her book, you probably want to stash some containers of it.

Wow, it's quite incredible you had snow in Memphis. I live in Montréal, and I've only seen snow flakes three or four times this year. It's actually snowing today, and I believe it is about time... for Canada.

I had pumpkin once only I think... when I made that pie from the Go Vegan calendar... and I used canned pumpkin because I'm lazy.

That Soup looks amazing!! I have heard great reviews of that cookbook but i dont have it, will have to order it soon! I have been going pumpkin crazy too, I was just day dreaming of fat free vegan's double-layer pumpkin cheescake but that soup looks good too, espeically on a chilly day like this.

I think there is no finer fall vegetable to go crazy over.