When Imagine Vegan Cafe opened in April, I knew I'd be dining there often. It's Memphis' only vegan restaurant, and they specialize in my favorite thing — completely unpretenious comfort food. But I had no idea I'd be eating there twice a week, nor did I realize I'd gain a whole new set of friends out of the deal. But that's exactly what happened.

A few friends and I made a plan to eat there one Wednesday night back in May, and those friends invited their friends and so on. We had about 10 people there that first night, and we decided to do it again the next week. And the next week. And the next week. You get the idea. When Imagine started serving brunch, the same group (we call ourselves the Imagine Supper Club) decided to meet up weekly for that meal too. In the process, I've made some new close friends and we've all gotten really tight with Adam and Kristie, the amazing couple who owns the restaurant.

Last Sunday, they hosted the first annual Imagine Holiday Party, and many from the supper club went. There was a $15 cover for all-you-eat appetizers and desserts, plus fun holiday music performed by Adam and his local musician dad Terry Mike Jeffrey. Adam's the one in the back playing drums: 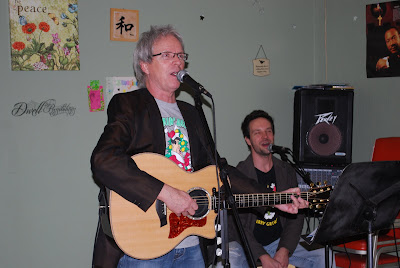 And here's Kristie – mother of three and extraordinary vegan cook! 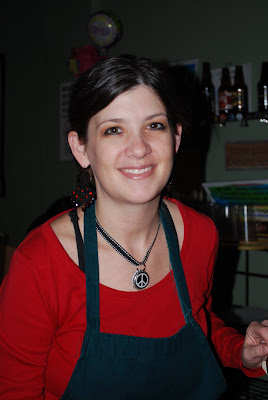 Earlier this year, she popped her third baby out and went straight back to working in the restaurant. She's a pro. Besides all of their human babies, they also have a pet pig, a donkey, and somewhere around 17 dogs (some of whom are fosters) on their land in Mississippi: 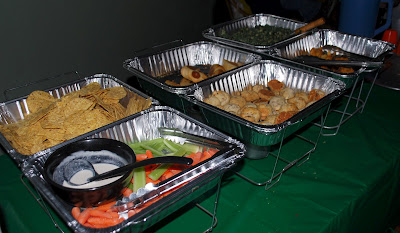 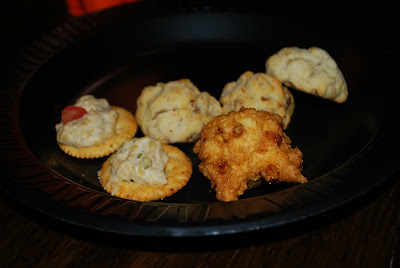 And my plate #2 (I had three plates of appetizers!) with a pig in a blanket, chips and chili, a hush puppy, an "egg" salad cracker, and carrots with ranch: 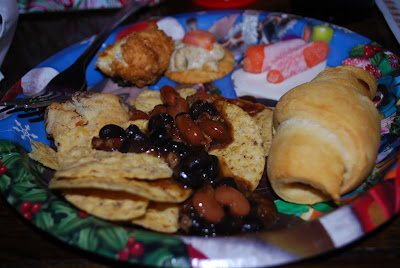 The all-you-can-eat desserts were prepared by Karina Khan, a Nashville-based vegan baker who delivers fresh treats to Imagine once a week (for my Nashville readers, Karina also prepares desserts for Wild Cow): 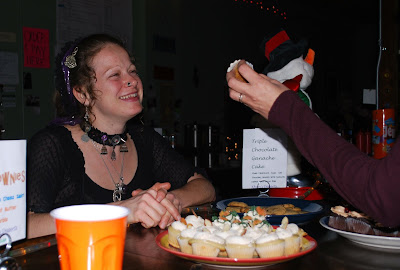 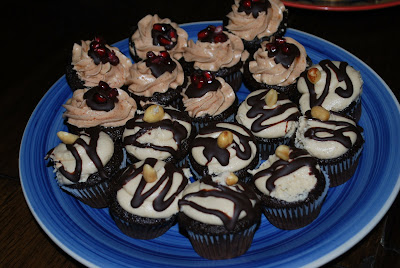 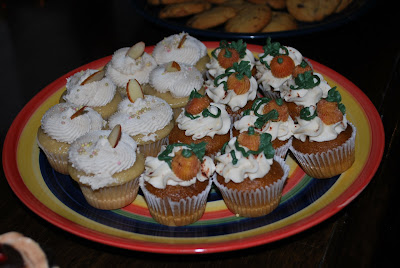 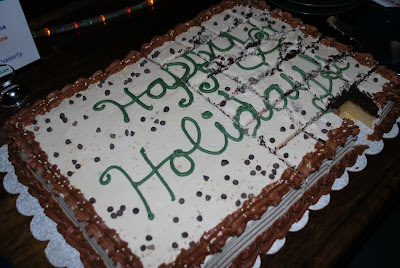 And if that wasn't enough sugar, there were also Chocolate Chip Cookies: 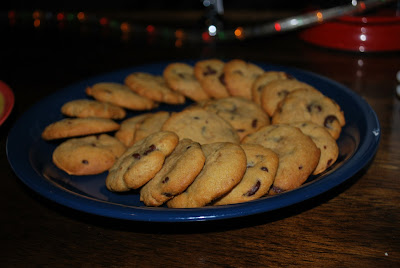 I'm not ashamed to admit that tried nearly one of everything. I may have skipped a few cupcakes when I realized I was going into a sugar coma.

After everyone was stuffed, Terry Mike Jeffrey asked the audience to participate in a "Twelve Days of Christmas" sing-a-long: 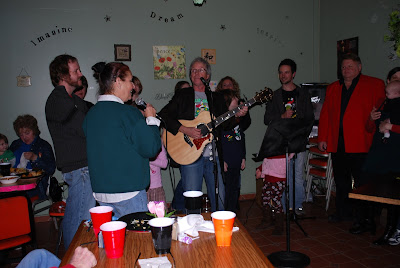 Isn't that just adorable? I'm tellin' y'all, I really felt like I was at Adam and Kristie's family Xmas party since so many in attendance were their family members and long-time fans of Adam's dad. I can't think of a better way to spend the holidays than with delicious vegan food, friends, and the Imagine family.
Posted by Bianca at 10:53 PM

I've never had pomegranate with anything besides white chocolate before. That sounds so interesting.

What an awesome place! We are headed south and we might just need to take a detour to check out Imagine.

Very Beautiful! Glad to see some positive vibes like this around the holidaze! - "Meat-free" Mike

What a fun party!! I really loved Imagine when we went for brunch! Got to get back to Memphis soon and check 'em out again! Can't wait to see you!!

Sounds like a great time! I can't wait to eat there...next year...with you! :o) Merry Christmas to you and your family!

This looks like such a fun time!! So jealous, wish I could join the supper club - what awesome food and company!

What a cool event!

My husband and I stopped at Imagine one our way home from Mississippi after Thanksgiving. Great food and lovely people. I am really excited to read what they are up at Imagine on your blog! - Cindy