Yesterday's pumpkin soup called for MimicCream, so I opened the one carton I'd been hoarding for months. But the soup only called for 3/4 of a cup, so there was plenty of leftover. Not one to waste a hard-to-find vegan commodity, I decided to use another cup of the nut-based heavy cream to make the DIY Vegan Mozzarella That Melts from Veganize This!

Many of Jenn Shagrin's recipes call for MimicCream, so I knew I'd find something in her book to put my extra cream to good use. Since it's not widely available across the country, she also provides suggestions for making MimicCream alternatives at home.

But I used the real stuff to make her creamy mozzarella. This silken tofu and MimicCream-based cheese firms up like a block cheese, thanks to agar powder. It's similar in texture to many of the cheeses in The Uncheese Cookbook. And the stuff actually tastes very much like Follow Your Heart Mozzarella! Plus, it actually melts! I grated some onto my Personal Pan Pizza with Mushrooms and Olives: 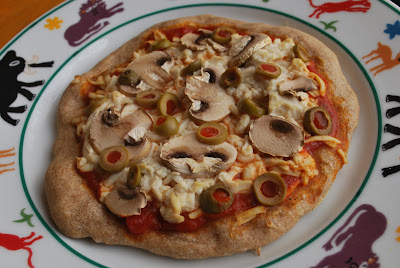 I used a fourth of the cheese on this little single-serving pizza, and since the cheese recipe doesn't call for any added fat, I didn't feel guilty about piling it on. Look how melty! 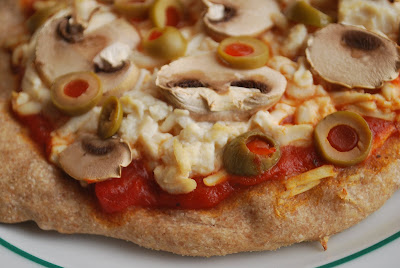 I used Isa's recipe for Pizza Dough from Vegan with a Vengeance for the crust, but I divided the recipe into fourths so I'd have enough for four tiny pizzas. I baked one pizza and froze the other three balls of dough for use later in the week. Yum!
Posted by Bianca at 11:03 PM

Looks great! I have some mimicream I might need to crack it open for this.

I've never yet heard of mimicream. Will need to look into this stat!

Wow, that looks like a good reason to get MimiCream.

I should definitely try to freeze my dough and make small pizzas. How convenient!

This looks great.
I recently bought a container of mimicream that was on sale. I should definitely try it out soon!

I have not heard of mimic creme till today, will have to look for it tommorrow, the pizza looks so good will have to have a pizza night.

What this mozzarella better than Daiya, in your opinion?

Wow- I'm impressed. As for MimicCreme, I am addicted to it in my chocolate mint oolong tea. Sooo good!

Oh hey, homemade vegan cheese that melts? How suave. And I'm assuming mimicreme would be fairly easy to veganize - isn't it just cashew and almond cream?

crap, I wanted to make this and it seems there is no mimicream here...erg!