But here we are in 2011, and you'd have been right. First, there was Mellow Mushroom in Germantown, a cutesy chain joint that added Daiya to their menu last fall. It's about a 45-minute drive from my house, so I don't get there often enough. But the Mega-Veggie with Daiya is well worth the drive: 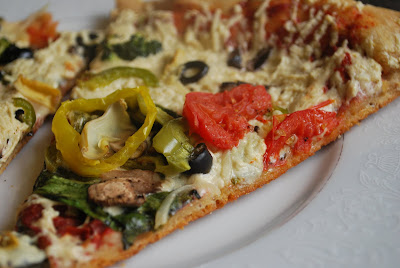 Then came the Hi-Tone Cafe, a Midtown rock club/hipster hangout that serves pizza, sandwiches, and a delicious veg-friendly brunch. They added Daiya for pizzas and calzones this past winter. The Veggie Pizza with Vegan Cheese is to-die-for, but sometimes they're out of Daiya. So call ahead to be sure it's in stock: 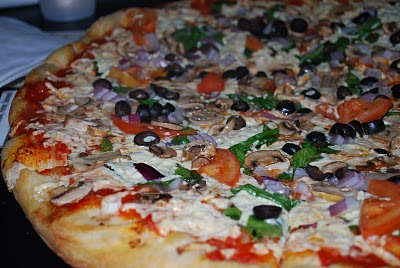 Around the same time the Hi-Tone began offering vegan cheese, the Trolley Stop Market added Daiya to its locally-famous pies. I've still not tried the vegan pizza from their regular menu, but this Thai Pizza with Peanut Sauce and Daiya was offered on special one Vegan Night Monday a few months ago: 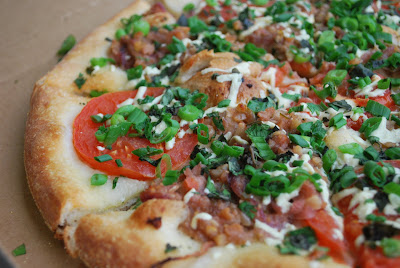 They serve vegan specials every Monday, fyi. I tried ordering the vegan pizza from the regular pizza menu a few weeks ago, but they had a party dining in and pizza orders were backed up. So I ordered their Spinny Shroom Sandwich with Daiya instead (spinach, mushroom, tomato, and mozzarella). 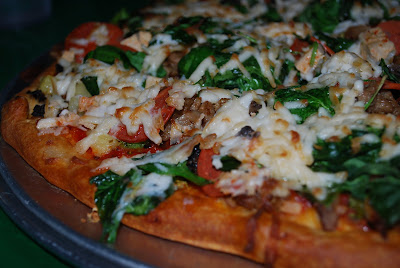 You can choose less toppings, but we went "The Works"-style with every topping they had. The crust was soft and flavorful, and my slice was so heavy, I had to eat it with a fork! I love that Imagine uses Follow Your Heart for something a little different. I love both Daiya and FYH, and it's nice to have a choice.

So if you live in Memphis or you're visiting here and craving a pizza, you know where to go. You can find more info, like addresses and phone numbers for these places, in my Memphis Vegan Dining Guide.
Posted by Bianca at 10:16 PM

Hi there! I just moved to Memphis this past week and am so happy to have found your blog! My goal is to work my way down your Memphis vegan dining guide. I passed by Imagine cafe tonight to check out the menu and everything looked SO good! sad i didn't have time to eat :( I absolutely can not wait to go back. Any suggestions on what I should try on my first visit?!

Why didn't they have this when I lived in Memphis from 06 to 08? Grrr. Lucky you!

Seems like this is a recurring theme. Loving that pizza isnt that hard to come by these days.

Wow, jealous you have so many vegan pizza options!

Hey Jennifer! I couldn't find a way to contact you, but if you check back, I'd recommend the French Dip Sub, the "Chicken" Drumstix, or the Country Fried Steak! But honestly, everything at Imagine is amazing. It's mostly faux-meat based, but that's what I love!

If only we had the same story here :(

The pizza with the works looks amazing!

yo. i just voted for you on VegNews awards. that's so frickin sweet you're in there!

As always, thanks for sharing your local information! I'm sure I'll be referring back to this post.

That's amazing that in less then a year you went from 0 to 4. I believe Tampa is still hovering around the 0. Which is your favorite of the ones you've tried?

Your photos of pizza make me hungry!