Things to Do with Hummus and Vegan Mayo

I keep a list of must-make recipes and dinner ideas in a note on my iPhone. It's pretty damn long, and I'm certain I'll never get to all of them. I probably started the list over a year ago, and while many entries are clearly marked as recipes from cookbooks, I found a simple "home fries with hummus" listed near the top.

I recall seeing the idea for dipping home fries into hummus on some blog, but I'm not sure which one. I know it sounded delicious and like something I'd never think to do on my own. No recipe needed. Well, technically I guess I did use a recipe. Last night, I baked some potatoes using Happy Herbivore's Herbed Home Fries: 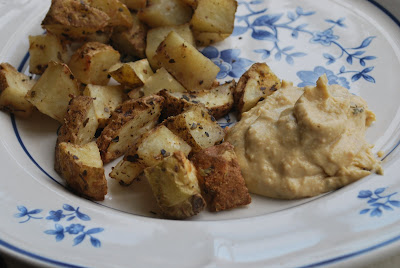 I was the lucky contest winner for a few Sabra hummus coupons from Food Feud, so I used Sabra Roasted Pine Nut Hummus for dippin'. Oh, and I added sriracha after snapping the photo (of course!). What an awesome combo! From now on, I think I'll always serve home fries with hummus.

For my side dish, I made a Vegan Caesar Salad from the April/May 2011 Vegetarian Times: 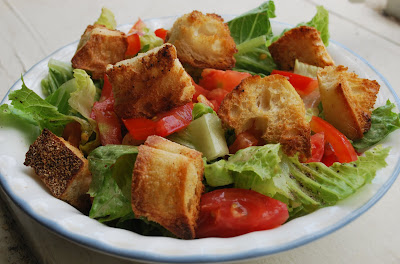 It wasn't actually a recipe in the mag, but rather a food idea suggested in the "Ask the Chef" section. John Lenhard of Sublime Restaurant gave his secret to making a delicious Caesar dressing — 2 cups vegan mayo, 1 1/2 teaspoons Wizard's vegan Worcestershire sauce, and lots of garlic (some sauteed in olive oil and some raw). I know it looks like the salad in this picture doesn't have any dressing, but I promise it does! I only used enough to lightly coat the Romaine because it's kinda fatty.

I made a smaller batch using 1/2 cup of Earth Balance Mindful Mayo (this stuff is just as good, if not better, than Vegenaise, y'all!), about a teaspoon of Wizard's sauce, and 3 cloves of garlic (2 sauteed in one tablespoon of olive oil).

The croutons are made from day-old French bread sprayed with non-stick spray, dusted with garlic powder, and toasted in the oven. And I know tomatoes don't belong in a Caesar, but I can do whatever I want.

What do you like to do with hummus? Or vegan mayo?

I'm glad to see it was put to good use. I would never have though to eat fries with hummus but it makes sense since they're both DELICIOUS.
I'm not a fan of mayo - vegan or non - but I DID see a chocolate cake on Hannah's Bittersweet blog that makes me want to risk it.
Hummus I love to eat on a toasted bagel with tomato.

Veganaise is so freakin' versatile. A friend, Vicky, makes a very simple sauce for steamed fresh green beans: Veganaise, Olive Oil, and fresh garlic- minced.
Toss it together with the beans - bliss!

I love topping baked sweet potatoes with chipotle hummus. I probably abuse hummus, I use it for nearly everything. It's good thinned out as salad dressing, or in hot pasta dishes when you want a creamy sauce. It's great on veggie burgers, fries, veggies and pita chips. mmmmm...hummus.

Potatoes and hummus sounds like an awesome combo! And Wizard's Worcestershire makes everything better.

I love hummus on toasted Ezekiel bread- warm and yummy for breakfast or a snack!

I make pitta chips for my hummus, so yummy! Or just boring in a sandwich. I also like mashed avocado mixed with a little vegan mayo on toast, makes it so creamy. I think I have slightly odd food tastes!

The BEST vegan ceasar I've had is still Tal Ronnen's. Everyone I know requests it for gathering. So good.

I wouldn't have thought to do home fries in hummus either. It would also work with my favorite thing to do which is mix hummus and salsa and paint that on every food in sight.

I eat a LOT of hummus and my favorite ways to eat it is one of the easiest things ever. I spread a whole wheat tortilla with a thin layer of hummus, pile on some sliced crimini mushrooms, sprinkle with a mozzarella-style cheese (Mmmm Daiya!), fold in half and grill in a cast iron skillet until the cheese is melty. In a pinch, you can even do this in a microwave! It's an instant meal for any time of the day.