I'm pretty cheap. Though I love processed and packaged foods, I rarely buy convenience foods I know I could make at home. It's about saving money, not avoiding packaged stuff. When I saw Turtle Island Foods/Tofurky Marinated Tempeh Strips a while back, I thought, "yea, I could marinate my own tempeh and save a buck."

But my co-worker Hannah let me sample a piece of her Lemon Pepper strips last week, and I was blown away by the intense flavor. It was far better than any marinade I could make on my own. On Monday, while shopping at Whole Foods, I noticed the strips on sale for $2.99. I pay that same price for plain tempeh, so I threw a package of the lemon pepper strips into my cart.

Then I found this recipe for Tofurky Tempeh Reubens on the Tofurky website: 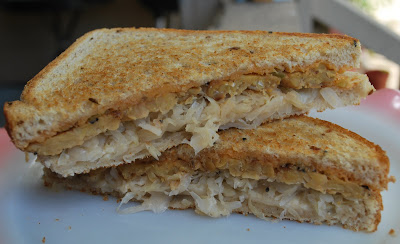 I've yet to try the other flavors — Smoky Maple Bacon, Sesame Garlic, and Coconut Curry — but I'll be happy to shell out the big bucks for these even when they're not on sale.

On the side, I made use of some fresh okra from my mom in this Smoky Stewed Okra & Tomatoes: 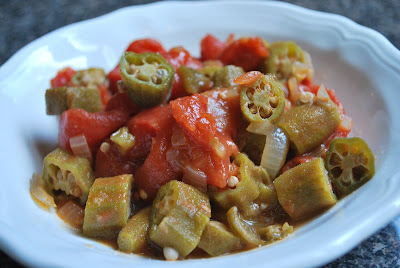 It's another recipe from my cookbook, which by the way, has been delayed until April. Sigh. I got an email from the Book Publishing Company a few weeks ago letting me know they were behind in production schedules and the book wouldn't make it's originally anticipated January release date. In a way, I suppose it's a good thing, as January may not be the best time to convince folks to buy more stuff. If you're like me, January is the month when you vow not to buy stuff because you've already blown too much on Xmas gifts. So hang on, folks! Don't give up. The cookbook will be out one day!

Are there any convenience foods you think taste better than homemade?

i fully agree, the tofurky tempeh is just awesome. we have two boxes of it in our fridge too. i love the versatility of tempeh...now i eat tempeh 3-4 times for every one time i eat tofu. much healthier that way too :D

i havent tried them ... b/c i'm cheap too and if i'm gonna shell out $5, i'd rather get tofurkey deli slices b/c i know i like them... glad to hear such good reviews tho - will have to give it a go.

bummer about the book not being out until april - but it'll be worth the wait :)

It looks awesome! My hubby loves anything tofurky. I do GF so miss out.
The okra looks fab.
LOVE okra!!

I saw this in the store and had the same thought process. I might spring for it now!

I haven't tried the tofurkey tempeh strips yet, but now I think I should. For me it goes "I could marinate tempeh myself, but WILL I?".

I obviously haven't been to WF in a while because I had no idea there were tofurky tempeh strips!!! I will have to try some :)

I'm so gonna make that sammy. Just so happens that I have some of those tempeh strips in my frig. :o)

Yes...that's a big sigh from me too about the delay of your cookbook. :(

I've never had Tofurky Tempeh yet. Having a couple of convenience foods on hand is a plus, especially with a teenager so hungry all of the time.

And you new pic is zaftig!

I'll have to give this a try. The reuben and okra dishes look great. Occasionally I splurge on Quorn chicken patties because they are better than any I could make.