Not the cereal, but I used to love that stuff in my sugary cereal days. I'm not even sure if it's vegan, but even if it was, I probably couldn't bring myself to buy it anymore. I feel guilty eating cereal that's not loaded with fiber and healthy adult crap. That makes me sound so old. Ugh.

But I digress. Today's breakfast wasn't cereal at all, but rather Happy Herbivore's Cinnamon-Banana Toast Crunch: 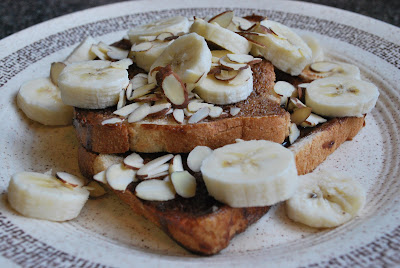 Two slices of whole grain toast topped with cinnamon-vanilla flavored maple syrup and bananas. And though the recipe didn't call for it, I added some sliced almonds for fun.

It's like cheater French toast, which is perfect for a busy weekday morning when I've overslept once again. I'm the queen of oversleeping lately. And I typically do all my breakfast prep the night before, so morning cooking always involves a microwave or a toaster. But this was super quick with very little prep the night before. And since it's toasted, not fried, this dish has far less calories than regular vegan French toast.

Do you have a cheater version of some otherwise time-consuming recipe?

What a great idea to prep your breakfast stuff at night. I'm going to have to steal that one.

Sometimes I make a cheater ratatouille by sauteeing onion, garlic, eggplant, zucchini and bell peppers (if I have them) and then adding in some can crushed tomatoes and herbs. Not the proper technique at all, and often missing a key vegetable, but quick and delicious!

soooo...not only is cinnamon toast crunch cereal vegan, but it's whole grain now. not to tempt you or anything ;)

Cinnamon Toast Crunch was literally my favorite cereal growing up! I think I'll have to make this french toast to regress back to my childhood memories.

Congrats on the nomination!! And this stuff looks like VeganCrack!! I mean drug crack, not butt crack!

I love prepping breakfast the night before, it makes breakfast so easy! I half cook my oats the night before because I'm really fussy and normally cook porridge for an hour, way too much time in the morning. x

I'm not sure if I use any shortcuts, but I always freeze extra muffins, waffles, and pancakes, so I have a quick breakfast in the freezer if I need it. In fact, I'm making lemon corn waffles from Vegan with a Vengeance on my day off to stock the freezer in time for grad school.

Mmmm love it! My mom used to make a cheater french toast called oven toast: just dab some butter in different places on the bread, sprinkle cinnamon and sugar, and broil until the butter parts are soft and the rest is crispy. Great late night snack!