My friend Cindy is always selling something. First, there was Arbonne (which I must say was pretty fabulous because it's all totally vegan). And now, she's peddling Premier Designs Jewelry. She talked me into having a jewelry party (think Tupperware party, but with necklaces and rings) for her on Friday night.

Since most of my friends aren't really the type to get into girly stuff, I knew I'd have to lure them over with food. I whipped up a batch of Eggplant Caviar from the Whole Foods iPhone recipe app. It's just roasted eggplant, red bell pepper, tomato, olive oil, lemon juice, and salt and pepper. Tasty served atop pita bread: 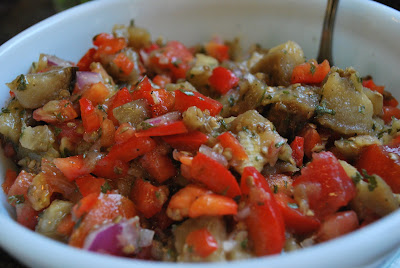 And also in the tomato-y stuff on bread category: Tomato Basil Bruschetta from Garden of Vegan. I grew the basil myself! 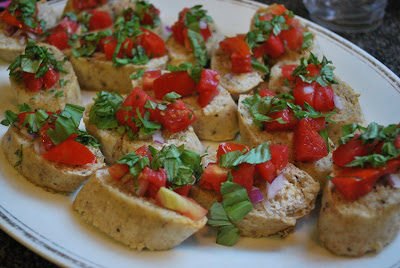 And because they were quick and easy, I made some Pigs in a Blanket using Smart Dogs and Pillsbury Crescent Rolls (yes, they're vegan): 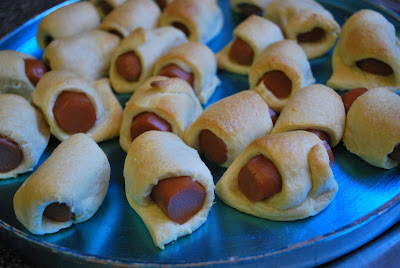 Not pictured is the Garden of Eatin' Red Hot Blues tortilla chips with tequila-lime salsa and guacamole. 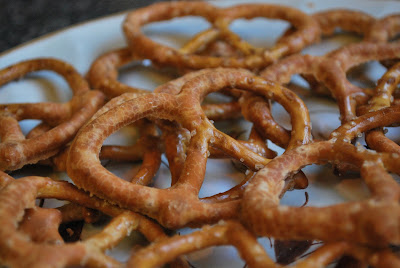 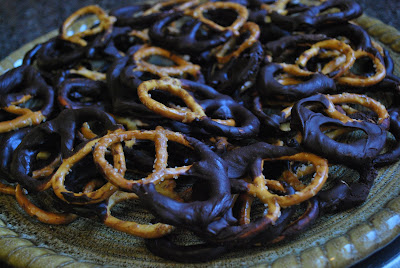 My plan worked! More than 10 people showed up, and I needed at least 10 folks so I could get some free jewelry. I ended up selling around $200 worth of jewelry for Cindy, and that means I get even more free stuff! I don't usually spend money on things like jewelry or clothes because I'd rather spend it on food. But it's nice to get some accessories for free.

Do you spend all your money on food? Or do you save some to blow on accessories or clothes?

I think that at this stage of my life I prefer to spend money on my children, no splashing, of course, they shouldn't get spoiled, but not making them miss out on good food and travels and experiences :-).

I have to make that pretzel treat! Such a great idea!

Now that we are in our 40's, and we have opted to not have children, I find myself spending money on food AND accessories/clothes. Quite different than my 20's when it was mostly just cheep food, bad beer and cigarettes ;)

Those pretzels look great. You say they take very little time? Awesome. I spend all my money on food.

I almost never wear jewelry but you totally would have lured me with your amazing food!

As for what I spend money on, I try to actually save money on everything, but I tend to spend it on food instead of jewelry, namely cuz my boyfriend will buy me jewelry for holiday presents(nothing fancy but still) so why bother. I have so much awesome jewelry as it is.

I do like to buy scarves and clothing tho, simply because I want to look nice, but they're so expensive!

We spend our money on nice vegan restaurants, nice hotels (I love to travel!) and tuition for our kids. I'm not really into jewelry. I hardly wear anything but my wedding rings and a bracelet or two. My husband likes it that way. Cheap and simple! ;)

The chocolate and butterscotch dipped pretzels are brilliant.
I spend a ton of money on food; more than I should, really. My clothes are almost always thrifted and I don't really go in for accessories...I guess the only other thing I spend a lot of money on is books, ha.

I had no idea Pillsbury crescent rolls were vegan. It's going to be a happy Thanksgiving this year! Those pigs in a blanket look awesome.

Pigs in a Blanket were a common dinner for me when I was growing up in our cozy trailer. I love that I can eat them as a vegan! I put Daiya pepperjack in between the smart dog and dough before I bake! Mmm!

Butterscotch dipped pretzels - that's something my kiddos would probably love. I'm going to have to remember that for Christmastime.

As for what I spend money on ... I am a sucker for Belleek.

I felt very naive the first time I hosted a party. Good for you for helping your bud and serving some awesome food!

I should keep better track of where my money goes. I think it all goes to necessities -- including good food!

I have very little spending money, but what I do earn I'll splurge on really nice ingredients, a foo-foo coffee drink, or something sweet from the co-op. I also spend quite a bit on gardening stuff.