About a week ago, I received an email from Laura over at the supremely awesome Vegansaurus blog asking me if I'd be down for veganizing the winning recipe from an episode of Bravo's Top Chef: Just Desserts show. It's part of a little series they've got going on over there where the Vegansaurus folks choose bloggers to veganize the winning dessert each week. Past week's have featured vegan superstars like Vegan Dad, Melisser from the Urban Housewife, multi-cookbook author Robin Robertson, and Celine of Have Cake, Will Travel. So I was a little, um, nervous to accept the challenge. Honored, but nervous.

But here's the catch: You don't know what you'll have to make when you agree to the challenge. And since I don't have cable, I had to wait until the day after the show — last Thursday — to watch the winning recipe video online. Turns out that last week's show — Dessert Wars — actually had seven winning recipes, so unlike bloggers from past weeks, I actually had a choice of what to make. I tried to wuss out and veganize the winning chocolate chunk cookie recipe. 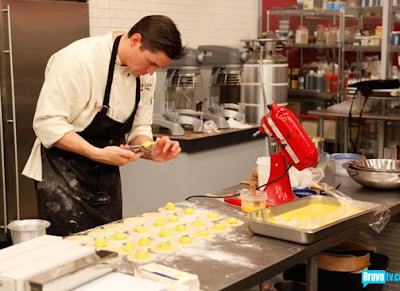 Top Chef's Morgan workin' the fried pies with lemon curd (from Bravo.com)
But Laura told me, in the nicest way possible, that I was being a pussy. She suggested I go for the vegan gold and instead make the Fried Pie with Lemon Curd and Salted Caramel Ice Cream. So I did. It was actually pretty simple, but it did take several days of freezing ice cream, making homemade lemon curd (using a Melisser recipe that I found on Vegansaurus!), and finally whipping up a bourbon-spiked pie dough. Then I had to fill, fry, and finally eat the suckers. You can check out the post on Vegansaurus here (yes Meave and Laura, I will marry you ... we can be like the Sister Wives from TLC sans that skeavy husband). 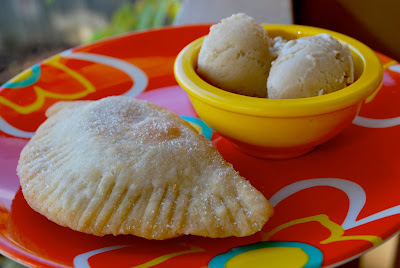 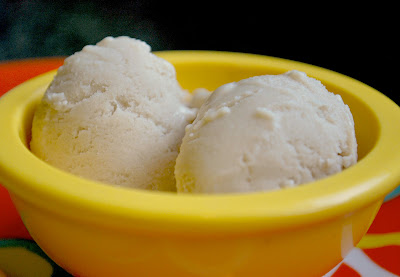 Instructions
Whisk together ¼ cup of the soymilk with the cornstarch in a small bowl. Set aside.
Place the soy margarine, brown sugar, and one Tbsp. of the soymilk in a medium saucepan. Heat over medium-high heat, stirring constantly until the margarine is melted and the brown sugar is dissolved. Add the remaining soymilk, soy creamer, and the salt. Bring to a low boil, stirring occasionally.
Once the mixture is boiling, stir in the soymilk/cornstarch mixture. Continue to stir until the mixture thickens. Remove from heat and stir in the vanilla.
Allow the mixture to cool to room temperature. A film may form on the top, but just stir that in. Transfer to a storage container and refrigerate for several hours or overnight.
Freeze in an ice cream maker according to instructions.

Instructions
Combine the lemon juice, water, sugar, cornstarch, and sea salt in a blender. Blend until smooth.
Pour the mixture into a medium saucepan and stir in the lemon zest. Heat on medium, whisking constantly until the mixture comes to a full boil (about 10 to 15 minutes). Allow to boil for one minute undisturbed. The mixture will be thick and start to turn a little clear. Remove from heat.
Stir in the soy creamer and soy margarine. Whisk until margarine is melted and everything is fully combined. Allow the lemon curd to cool to room temperature in the saucepan. Transfer to a jar and refrigerate. 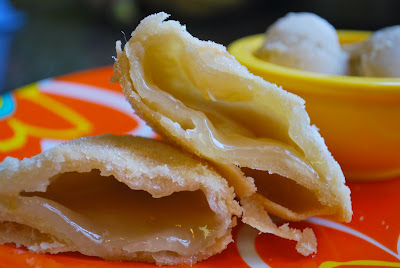 Instructions
Sift together the flour, sugar, salt, and baking powder in a large mixing bowl.
Cut in the shortening. Pour the water and bourbon into the dry mixture. Stir to combine. Lightly knead the dough to form a thick dough ball. Let the dough rest for 10 minutes.
Separate the dough into 12 equal-sized balls. Lightly flour a clean surface and roll out one dough ball into a 5-inch circle.
Place one tablespoon of lemon curd in the center of the circle. Lightly spread it around, leaving plenty of room around the edges.
Fold half of the circle over and press edges to seal. Crimp the edges with a fork and transfer the pie to a plate. Repeat with the other 11 dough balls.
Cover the plate with plastic wrap and place the uncooked pies in the refrigerator for at least 30 minutes to chill.

To cook, heat 2 cups of canola oil in a large sauté pan with sides. Heat for about 10 minutes, or until the oil reaches 375 degrees—you can test the temperature with a metal candy thermometer.
When the oil is hot, place as many pies into the pan as will fit without touching each other. Fry for about 5 or 6 minutes on each side, or until golden brown.
Remove the pies from the hot oil using a metal slotted spoon. Allow to drain on a paper-towel-lined plate. Sprinkle pies with sugar while they’re hot. Repeat with the rest of the pies. Serve with salted caramel ice cream.

Chef’s notes: The filling sort of stuck to the sides of the inside of the pies, so they look a little hollow, but when I bit into one, lemon filling squirted all over my face so it’s definitely there. I also found that once cooled to room temperature, the pies can be wrapped in waxed paper and kept for a couple of days.

Also, you'll have about twice as much lemon curd as you'll need for this recipe. But it's delicious, so you'll want extra for schmearin' on your toast later. However, if you're crazy and don't want extra lemon curd, then feel free to halve the ingredients for that recipe. But just know that I'll think you're crazy...

Freakin' amazing! They look SO good!

Girl, you are a superstar!!
(But you always were in my book anyway.)

Mucho love from a fan in Texas,
me :)

When you take on a challenge, you take it on! (okay, maybe with a little nudge.). Looks fab!!! I can't wait to make this.

Wow! I really want to try these out. They would be the perfect dessert for a summer-time dinner party.

I've been following this series and it's awesome that you were invited and stepped up to do the non-pussy recipe. These look so good!

Dang it woman! You did it! I know I tend to psych myself out but when you put your mind to it you come out with wonderful results. Congrats! I want that now.

Holy hell. I am on my way to Memphis now.

BIANCA! you are amazing! you freak'n veganized top chef's fried pie with lemon curd and salted caramel ice cream. wow, wow, wow! that's a ton of work, and your dessert couldn't be more glorious! mmmmmmmm! you had me at bourbon-spiked pie dough, my friend. :)

p.s. - while i haven't seen that TLC show, i did see an ad for it in a copy of People magazine at the gym. that dude looks totally skeavy. aaaaaahahahahahaa!

wow! impressive culinary skills, miss crunk! you went balls out, and it totally looks rockin'. i hope you had a panel of fine palettes to enjoy your creation!

Vegan MoFo is a conspiracy to make me buy bigger clothes; i'm tellin ya.
That aside; what souther girl doesn't like a little fried pie? NOM.

Awesome job! It sounds like a lot of work for a lot of delicious payoff. They chose the perfect girl to make a fried dessert :)

This looks and sounds amazing!

You are unbelievable! You simply rocked my vegan fried pie world. Well done!

Wow, that does NOT look easy! Good for you for taking on the challenge, just in time for MOFO!

Bianca, you are a top chef! That ice cream is calling my name!

Very good I am lucky no one ever ask me to do stuff...I would have panicked at that.Question though and I am going to make some ice cream later..why so little salt? When they say salted I would expect that slightly salty caramel ....can I add like a 1/2 tsp?
I watch top chef every week I got cable just to watch that stuff. You did an excellent job Bianca and yeah if you did the cookie I would have thought you were a big pussy too!

I LOVE IT! I missed mini-pies so much I got a little pie press thingy from crate n barrel - I can't wait to try it out with this recipe!

You are awesome! woohoo!

Goodness, you're a veganizing rock star!

I haven't seen The Ramen Girl, but I will definitely take your recommendation and watch it soon!

Anonymous said...
This comment has been removed by a blog administrator.
November 2, 2010 at 4:17 PM

:O Wow those look amazing! I was wondering what dessert would be veganized from Top Chef since there was a few to pick from.

That looks amazing! I am super impressed.

that's an awesome idea for a challenge.
I love anything with lemon, so I'm definitely going to try these :)

Congrats! You did a lovely job!

There's this awesome local ice cream place (although I hear they're rapidly expanding), Jeni's, that has a killer salted caramel. Sadly, it's not vegan, but I can still remember it from a few years ago. Mmmm! Thanks for this friendlier vegan salted caramel recipe!

ahh love that your veganize the just desserts food. if i wasnt so lazy id make this to try out :)