I've been eating vegan cheezecake and chocolate pecan pie leftover from Thanksgiving for days, so I really don't deserve a piece of cake. I mean, I always deserve cake because I'm awesome! But you know, my body probably doesn't need any more sugar. Thankfully, I made this yumilicious Yella' Cake with Fudgey Frosting last week, so I couldn't have a slice now if I wanted it (and of course, I do!): 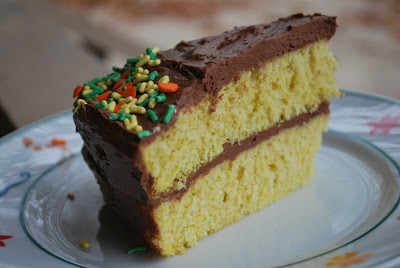 This recipe was the final new recipe to be developed for my cookbook. I've been busy testing and re-testing recipes that I've developed over the past two years, but for some reason, I was holdin' out on creating a vegan version of my favorite cake — a simple yellow cake with chocolate frosting. I knew I wanted to include a recipe for it in the book, but I kept putting off development.

The cake part was, um, a piece of cake since I'd already developed a moist yellow cake (that's yella' if you're from these parts) for my Coconut Icebox Cake. But the frosting was kind of a bitch. It took me three tries in one night to achieve the creamy, fudginess that I was aiming for. It was a work night, and I started baking late. I think I stayed up until nearly 1 a.m. tweaking the frosting. I threw out two batches before I got it right. 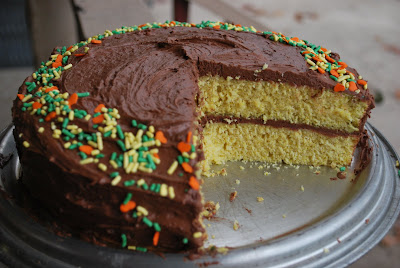 I guess third time really is a charm because the last batch was exactly what I had in mind. I brought the finished product to work and it was quickly devoured by my co-workers. I'm so thankful that I have dessert-loving colleagues to pawn sweets off on. Like I said earlier, I always want cake. But my hips know better.

What's your favorite cake/frosting combo?
Posted by Bianca at 11:36 PM

Chocolate cake with chocolate frosting has to be my favorite cake combo, but I certainly wouldn't refuse a slice of your yella cake! I guess I'll have to try it when your book comes out :)

oh that looks divine! so when your cookbook comes out.. i will need you to sign mine. :) haha. have a nice week!

that frosting really does look fudgey and creamy. sometimes it takes some serious persistence!

I made an amazing coconut cake with lemongrass frosting last summer... that was freaken amazing.

The basic yellow cake with fudgy frosting is as southern as lemon bundt cake. Yay for the south!

The cake looks delicious! Even though I've eaten enough to feed a small arny over the last few days, I would still have to try a piece! Also you talking about your (non-existent) hips is cracking me up! Haha!

I think my favorite cake is vanilla with chocolate frosting. What is the difference between yellow cake and vanilla? Do you still use vanilla extract? Anyway, your cake looks fantastic!

That cake looks so yum!!

Looks delicious! You remind me of my old friend from Richmond who said "Yella'"!

Okay. I'm buying your book just for that recipe (alright, your other recipes look awesome, too)!
It's just that that cake looks so good.

I can see why this would be devoured rather quickly too!

I would buy your cookbook just for this. It is my all-time favorite cake. Hands down.

I'm not even a big cake fan and your yellow cake with chocolate frosting looks amazing! It reminds me of the cakes of my childhood. :)

I can't wait to get my hands on a copy of your book when it's finished!

It is always time for cake.

Holy shit, yum. Yellow cake with chocolate frosting is also my favorite!! So simple, but so perfect. Yellow cake is seriously the ONE thing I miss from my omni days. I don't think of it often, but when I do, I miss it because I have yet to find a suitable vegan version since typically, yellow cake gets its color/moistness/magic from eggs!

You are my hero. I need that recipe.

Carrot cake with cream cheese frosting is my favorite, but yellow cake with chocolate frosting is a close second. Your cake looks perfect. Your icing skills are was better than mine.

growing up this was always my favorite cake. i always requested it on my birthday, yellow cake, chocolate/fudge frosting. its nice to see it veganized :)