Vegan Mofo: Thanksgiving at the Office 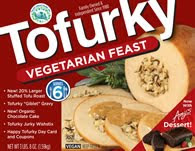 Almost every year, my company hosts a Thanksgiving lunch a few days before we get off for the actual holiday. Some years, we do a potluck. But this year, the company ordered a catered lunch from Corky's, a local barbecue joint (for the record, the 'cue joint served traditional Thanksgiving food). We have at least six vegetarians at the office, two of whom are vegan (including me!). In case you're wondering, I write for an alt-weekly, The Memphis Flyer.

Corky's doesn't offer any vegan food. Thankfully, I was lookin' for an excuse to cook up my Tofurky Vegetarian Feast, which Turtle Island Foods offered me for free in exchange for a blog review. So I spent last night and this morning cooking up the contents of the feast box — one Tofurky roast (now 20% larger!), one package of Tofurky Giblet Gravy, and an Amy's Chocolate Cake. I also whipped up an extra side dish and dessert.

Now I've had Tofurky plenty of Thanksgiving's before, but in recent years I've switched to Field Roast's Celebration Roast (nothing against Tofurky ... I was just trying to switch things up from year to year). I was excited to give the Tofurky roast another try, cooked up with an olive oil/soy sauce/sage baste and some chopped white potatoes, sweet potatoes, carrots and onions: I've always loved Tofurky, but I swear it was tastier than it used to be. The texture seemed more tender, and the taste was more, um, turkey-like. Another co-worker commented that it tasted better than she remembered too. If you haven't had a Tofurky in awhile, try it again and see what you think. I think they've changed the recipe for the better. Several of my omni co-workers tried (and liked) the Tofurky as well, and my boss even called it "passable."

Though I didn't photograph the "giblet" gravy, it was also included in the feast box. I'd never it tried before, and it was pretty darn delicious for a frozen heat-and-serve gravy. Tasted homemade. 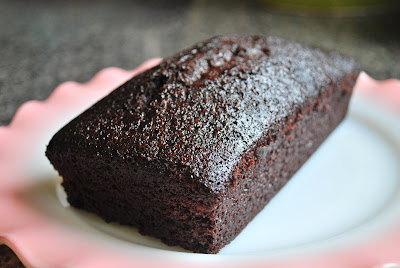 Now I've seen these advertised in VegNews, and I've noticed the frozen loaf-size cakes in Whole Foods. But I rarely ever buy pre-made desserts. I figure if I'm gonna splurge on sugar calories, they better be from something homemade. But y'all, this cake is fan-freakin-tastic. OMG. You just take it out of the freezer, thaw for a few hours, and voila. No baking involved. The cake is so, so moist. You could even eat this stuff with a spoon. It reminded me of cake batter, but in solid form. I ate one piece at work and finished off another two pieces later. I wish I had more right now. Thankfully, the feast box comes with coupons for more cake.

I asked other vegetarians in the office to contribute a dish to our alternative feast if they wanted and Hannah (the other vegan) brought a yummy veggie pot pie with phyllo crust. Very fancy. She was worried that it would taste like poop, but it was delicious! Sheryl brought some savory wild rice that really hit the spot. I wish I'd snapped a photo of both dishes, but by the time I saw their food, I was more concerned with eating than taking pictures. I did snap a plate shot, but it came out blurry. Boo.

To make sure we had enough food, I also brought my Hungry Jill Casserole — a baked bean and biscuit dish topped with Daiya: 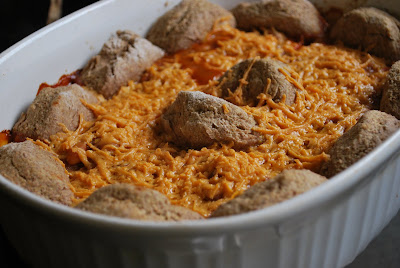 And I made some Chocolate Pecan Tarts: 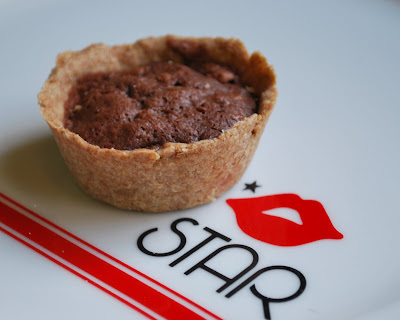 The tarts aren't quite where I want them yet, but they're almost there. I figure if I tweak the recipe one more time, I'll have a winner. Both the casserole and tarts will be included in my cookbook.

Several of us herbivores sat together at the company lunch. Here's Susan and Mark, enjoying their cruelty-free fare: 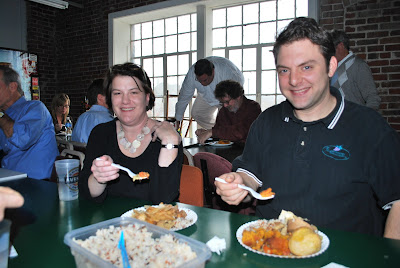 After lunch, Hannah and I fought over the Tofurky Jurky Wishstix: 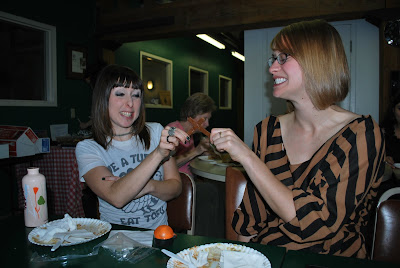 This cute jerky "wishbone" was also included in the feast box. I'm not sure who won, but Hannah managed to score the bigger half. I think that means she won. Cheater. :-) By the way, check out my festive and seasonally-appropriate "Save a Turkey, Eat Tofu" shirt.

What do you serve as your Thanksgiving centerpiece?
Posted by Bianca at 11:12 PM

Love this post! I agree with you, the actual Tofurky roast seams to have improved in taste over the years.

That Hungry Jill casserole looks delicious! (will this be in your cookbook)

Also love, love, love the t-shirt...where did you get it?!

I'm so reluctant to try Tofurky. It looks really good in your picture though. Maybe one of these days I will break down and try it. We had our Thanksgiving luncheon at work and I just didn't participate. Booo. It smelled good too.

I'd switched to the Field Roast for the last couple Thanksgivings (or did something homemade), but now I think I should try Tofurky again. All your food (and shirt!) look wonderful, as always, Bianca!

I was tickled to hear about wishstix! I'm going Tofurkey this year. I tried both the Tofurkey and the Celebration roast to see which we liked better. I was too shy to try the gravy, though, but maybe I'll break that out for the big day. It's awesome you had so many people to share good eats with at work!

so awesome that Tofurky's tasting better and better, Bianca. i haven't had one in about 3 years.....it looks great! huzzah for more of your hungry jill casserole, and those chocolate pecan tarts are the cutest! the wishstix is a neat idea - i love that! hooooooray for all the cruelty-free eat'n!

I haven't had Tofurkey in about five years, but I was considering getting some for Thanksgiving this year, instead of serving vegan Italian sausages as the "meat," like we've been doing. Now I'm sold! Thanks for this post.

Glad to hear you liked the Amy's chocolate cake...I saw it at Whole Foods the other day, and was thinking about trying it but decided against it. Maybe now I'll go back and get one!

I've actually never tried tofurky.... I'm already planning to make my usual eggplant tomato cashew casserole thing for the vegetarian entree this year, but your photos do look so good that maybe after the holiday I'll find a tofurky on sale and give it a try... ;)

I've always thought the Tofurky was a little dry but I think I will give it another try now! Maybe for Christmas, since I already planned to make pumpkin sausage for Thanksgiving! The chocolate cake looks really tempting too!

P.S. It makes me really happy to see Eve on here too! Glad I could connect you two! Hi Eve!

Believe it or not, I am a lifelong vegetarian and I have never tasted Tofurkey or Fieldroast! haha.. It looks good.. and it's great that it tastes good. Giblet gravy... oy.. that is sooo odd, but it's cool it was tasty .. and that cake!

I wish they had that tofurky here in jackson...that's what I would be having for Thanksgiving! I'm struggling with Thanksgiving, because I am the only vegan in the bunch and everyone thinks that I can still eat any kind of veggies, even when they are cooked with gobs of butter, and seasoned with meat...ugh :o)

Believe it or not, I am a lifelong vegetarian and I have never tasted Tofurkey or Fieldroast! haha.. It looks good.. and it's great that it tastes good. Giblet gravy... oy.. that is sooo odd, but it's cool it was tasty .. and that cake!

I have never had the Tofurky roast but it looks really good. Maybe I should try one for Christmas.

Our food centerpiece this year will probably be portabello caps filled with bread stuffing. In the past I have made seitan cutlets or filled squash halves. I seem to change every year.

I usually go with a Tofurkey. It's tradition by now. But...I also get a 2nd one. Last year it was the Celebration Roast (Field Roast) and this year it's their Hazelnut Cranberry roast. Looks tasty! We'll find out :)

I had Tofurkey last year for the first time and really liked it. This year I am doing all stuffing.

We had a Tofurkey last year and everyone loved it, even the non-vegans.

I don't like chocolate cake and neither cake lasted until Thanksgiving. We got two Tofurky kits for the price of one at our store and we tried the first one. The second vanished that same week. I still have to tofurky [thawing at the moment] and the gravy but now I'm hunting for a local store that sells Amy's cake. Perhaps it is a good thing it is hard to fine around here. It's addictive.

I'm English but was on holiday in Cananda during thier Thanksgiving. My friend I was visiting bought the Tofurky Feast for me and I loved it. Wish we could buy it here. The leftovers were good on sandwiches too!

I'll have to try the tofurkey again--I had it years ago and was not impressed! For the past year I've been eating field roast celebration roast and I really like that!