The streets of Memphis are paved with barbecue sauce. Seriously. The people here live, eat, and breathe the 'cue. So it's no wonder that my cookbook will have lots and lots of vegan barbecue-based recipes. Thankfully, you can do a million and one things with barbecue sauce. Down here, we put 'cue-sauced protein on our sandwiches, nachos, salads, spaghetti, and even pizza!

A long time ago — back when I first started my cookbook project — I developed a BBQ Tempeh Pizza. But the early incarnations were more of a first draft. You can see old pics here and here. At first, I wasn't sure how to slice my tempeh for a pizza topping. But duh. I finally figured out that crumbled tempeh was the only way to go. Past versions weren't quite barbecue-y enough, but I've finally perfected my BBQ Tempeh Pizza: 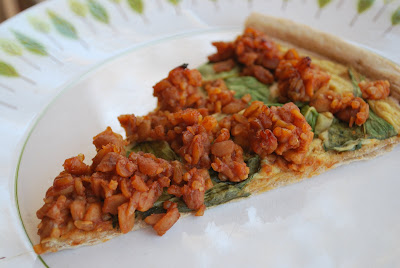 The tempeh is sauteed in my homemade Memphis-Style Barbecue Sauce (heavy on the vinegar with a lovely hint of sweetness). It's crumbled atop a homemade nutritional yeast-based cheeze sauce and a bed of fresh baby spinach.

this looks amazing. i can't wait until the next time I have some vegan pizza.

Looks nice. I wonder how you crumble the tempeh though? Most of the tempeh I've come across is quite sturdy, doesn't really crumble. I just grate it - using the same tools I'd use for grating a carrot.

I have to say I can't imagine a pizza without red sauce! Sure, I know people use pesto, white sauce satay sauce etc, but IMO tomato sauce is what makes a pizza a pizza.

Yum! What a great combination of toppings. I will definitely have to try this!

Yeah I am now putting you on pandawatch until your book comes out. That pizza looks amazing.

That would be so yummy right about now.

Yumm! I used to love BBQ chicken pizza, but this looks even better!

Crumbling does seem like the way to go - looks delicious! Barbecue sauce is still my favorite condiment. Maybe I should try a bbq soup - do you have a recipe for that? It could be like hoisin in Asian soups.

tangy barbequed tempeh over a cheezy nooch sauce and all on top of a pizza?!?! i'll take the whole pie! your bbq sauce is the BEST bianca - and i can only imagine how gloriously good your bbq tempeh pizza is. mmmmmmmm!

Cool!
That pizza looks lovely.
I have always wondered if your bbq pizza tastes as awesome as it looks (I bet it does!).

I can't WAIT for your cookbook! :)

yay! another muse for pizza! pizza: what can't it do?

i'd totally go cheddar nooch with this type of a topping!

That looks awesome, and I bet it would be super awesome with some ranch dressing. Just sayin'...