Vegan Dinner on a Carnival Cruise

Yesterday, I posted pictures from my vegan-friendly breakfasts and lunches on my Carnival cruise vacation from New Orleans to Cozumel. Tonight, I'm sharing pics of my dinners in the Paris Dining Room, one of two formal dining rooms on the Carnival Triumph.

Before embarking on my family cruise vacation, I did lots of googling for "vegan options on Carnival cruises." My searches yielded quite a few blog posts from vegan blogs I'd never even heard of. After reading several posts and chatting with some folks on the PPK, I gathered that Carnival could be very vegan-friendly so long as the dining room hostess or maitre'd is made aware of dietary needs. Most people said they had to make due with the vegetarian menu option on the first night, but after making the dining room staff aware of their veganism, every other night offered a special vegan dish just for them.

On the first night (Thursday), I started my meal with an appetizer of Fresh Fruit with a Tequila Sauce: 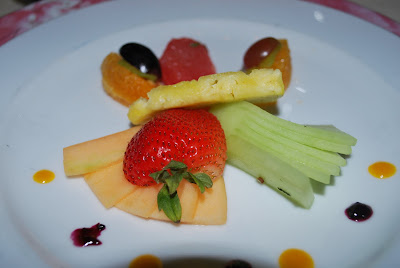 Since the staff didn't know I was vegan yet, I was lucky that the standard vegetarian menu option was an Indian Dinner with a chickpea potato dish, onion flatbread, crispy cracker bread, jasmine rice, a roasted veggie cake, onion slaw, and lemon pickle: 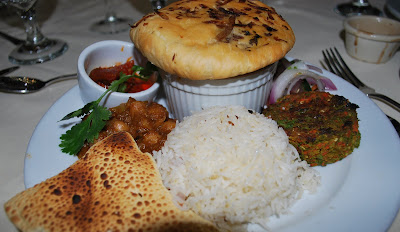 Underneath the bread was a ramekin of cottage cheese with peas that I couldn't eat. And I'm not totally sure how vegan everything else was, but I just ate it and hoped for the best. However, when I ordered the Indian dinner, I let my server know that I was vegan and that I'd been told that I should let the maitre'd know. The server was so nice. He said the chef would be happy to prepare vegan meals for me every night. He sent a hostess over to talk about my likes and dislikes. Lucky for the chef, I like everything so long as its vegan!

Dessert on Thursday was yet another plate of fruit. It was only thing on the dessert menu that I could eat: 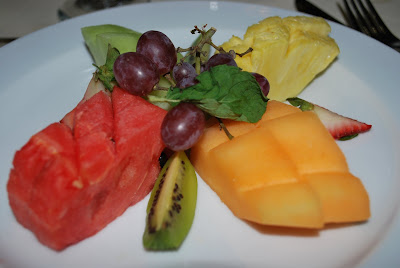 Friday night was Elegant Cruise Attire Night in the Paris Dining Room, and despite my dad's protests about having to dress up, my mom and I convinced him to don some dress pants and a button-up shirt. I think I've seen my dad dress up maybe three times in my whole life!

Once in the dining room, I started my meal with a salad (not pictured). Our server told me the chef had prepared a vegan entree and dessert for me, but I didn't know what I was getting until this Potato-Stuffed Pepper with Spanish Rice and Steamed Veggies arrived on my table: 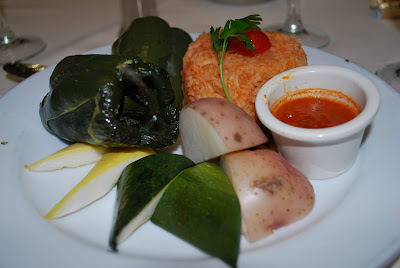 The peppers were burn-your-ears hot, but I love, love, love spicy food. So I totally devoured these veggie-stuffed peppers though my nose was dripping the whole time. Here's an inside shot: 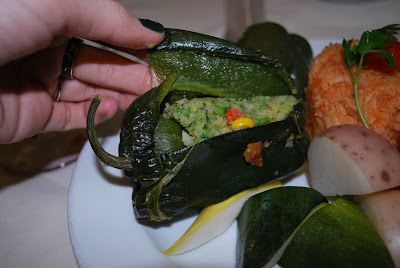 My surprise dessert was a Raspberry Puree with Fresh Strawberries. It tasted almost like raspberry preserves and it was really, really sweet. Almost too sweet to eat without toast. But I ate it anyway:

Dinner on Saturday night (the night after we boarded back onto the ship from Cozumel, Mexico) was lighter fare — another starter salad followed by this Creamed Corn with Green Bean Bundles and Sauteed Mushrooms: 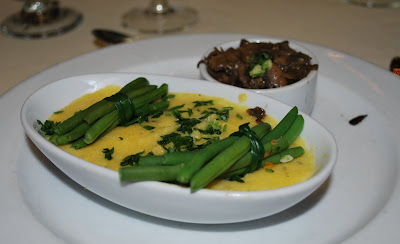 Since we stuffed ourselves at lunch in Mexico, the lighter meal was much appreciated on Saturday. The corn dish was very flavorful and creamy, and the mushrooms were absolutely perfect. My main course was followed by another surprise dessert — Pureed Strawberries with Blackberries: 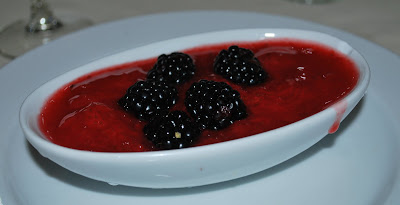 This dessert was much better than Friday night's, mostly because it wasn't quite as sweet. Just fresh, pureed berries with only a hint of sugar.

On Sunday — our last night of the cruise — the vegetarian menu option was a spinach lasagna. My mom ordered the cheesy version, and I was delighted when our server placed a Cheeseless Spinach Lasagna in front of me: 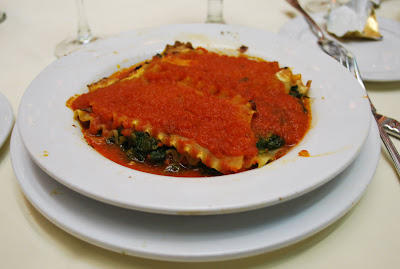 Though I've had lots of vegan cheese lasagna in my day, I'd never tried a totally cheese substitute-less version. It was really tasty. The sauce was so good, and that really set the taste over the top. The inside lasagna noodles were a little chewy, like maybe they were undercooked. But I don't mind undercooked pasta, so I devoured the entire massive serving.

Dessert was another Raspberry Puree with Strawberries, and this one was even sweeter than Friday's version. I could only finish half before the sweetness became too cloying: 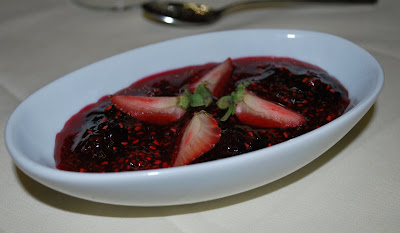 Overall, I'd give the Carnival's Paris Dining Room a B++ for Vegan-Friendliness. The staff went out of their way to make sure I had my own special dish every night. My entrees didn't disappoint in terms of taste, though the texture of the lasagna noodles could have used some work. And although I loved the hot, hot heat of the stuffed pepper, I know some spice wimps (like my mom) who wouldn't have made it past the first bite. Perhaps it could have been less spicy and served with a hot sauce to allow the diner to determine spiciness for him or herself. The strawberry dessert was fab, but the raspberry dishes were a little too sweet to be eaten on their own.
Posted by Bianca at 11:10 PM

Wow, I'm really impressed! Those aren't your standard "rice and steamed vegetables" vegan meals that some hotels or restuarants throw at vegans. The stuffed pepper in particular looks like something up to par with a good vegan restaurant! I'm so glad that this didn't turn out to be a problem on what I'm sure was an otherwise thrilling vacation!

gorgeous pics all around...i am amazed at how well you just ate on a cruise!

Im sorry, but I used to live at your cruise destination, and its spelled Cozumel.

I returned in October from a completely different carnival cruise and the similar food is very funny. Indian on the first night...same desserts...same fruit appetizer. I wound up skipping the dining room and doing the buffet for breakfast lunch and dinner. I liked my meals way more that way.

LOL the best cheeseless lasagna I ever had was on an AIRPLANE! Weird, huh? ;)

It's great that your cruise is so vegan friendly, I'd have been scared of being stuck on a boat with no food! The lasagne looks good & so does the corn, green bean mushroom dish.

I've been on a few cruises and ate a completely vegetarian diet. They were more than accommodating and the food was actually fantastic.

i'm so impressed that Carnival did such a sweet job on all the vegan eats! that's really cool that they talked to you, found out your likes and dislikes, and really made an effort to create some dishes that you'd enjoy. the stuffed pepper and cheeseless lasagna look amazing! i'm glad you had so much fun, but i'm also you're back, Bianca!

Impressive indeed!!! I wish Vegan food was available on every corner! Instead of the junk they serve now.
Thanks for your posts!

this is a great post - it's so cool and useful to see an insider's perspective on cruise fare like this (i've never gone on a cruise myself, but i know i would be skeptical of their food!). Too bad about the desserts... I would get sick of fruit every night! :(

That's pretty cool that everyone was so accommodating and even came out to talk about what you liked and didn't like.

Sometimes it feels even more special to have a normal chef prepare a vegan meal than to just go to a vegan restaurant. They could have been a little more creative with the desserts, though!

Hey, that's not too bad for being special-requesty. The fruit purees for dessert are kinda funny though :) The creamed corn sounds downright yummy!

Beautiful food and it's so great that they are so accomidating on the cruises.

This is some good eating, considering the last time I went on vacation my options were fruit vegetable and carbs. . .even the pureed deserts look pretty good for vegan dining. the cheeseless lasagna looks AMAZING.

Yum, I'm super impressed with the vegan options. I haven't been on a cruise since going vegan and was a little nervous about that.

good report Bianca
I wanna go on a cruise but I am afraid to spend my sweet money and then not get anything good to eat leading to dry mouth and look at other ppl eat.
I will do some more research as I want to go on Royal or something but I am loving this update.
God what is wrong with these ppl and these berries
I guess it was the fruit of the week
The hot pepper dish would have not been appropriate for most ppl but hey..u did not starve;)

Anonymous said...
This comment has been removed by a blog administrator.
December 2, 2010 at 3:52 PM

I am so thrilled to have read this! I am supposed to be going on a cruise in the summer and I was terrified for the food! But as long as I let the staff know, I should be alright! Thanks for posting all this!
-Tessa

Are you joking I'm a vegan and that sounds horrible. I am about to go on a carnival cruise and now I'm POed. I went on Celebrity cruises and got fat off vegan veggie burgers w veggie bacon and real vegan food. Not som slop that they had that they probably picked the meat out of it. I can't believe all of you oohing and ahhhing about that junk. Stand up and demand real veggie meat etc. and they will make your expierience much better. Now I don't even want to go

We just went on a Carnival Cruise (Triumph). The Dining Room staff was amazing. They created a custom vegan meal for our son every night, using such things as tofu and quinoa. It seemed like the chef used it for creative freedom, rather than a burden. The vegan dinners were Always very pretty and tasty. Our waiter was very knowledgeable and supportive of our son being vegan...gave him a big hug at the end rather than treating him like he created more work! For lunch aboard the ship our son hit the mexican place mainly and had black bean burritos. Since is is no charge, he would eat a few as a vegan teenage boy eats a lot! There was also a stir fry place that had tofu. For breakfast there were plenty of vegan things to get by. For the tours, one of our tours was very supportive and we didn't even have to tell them he was vegan as there was so much to eat that there were plenty of options. The other tour was not understanding of vegan folks, but our family and another veggie family talked to the Carnival Cruise Tour Director and they were so appalled by this that they refunded money and let us know all of the senior people at Carnival who would be looking into this. He was genuine with his concern. All in all, our son who was extremely worried he would starve ate very well each day. Be sure to tell the head waiter as soon as you board the ship of your vegan needs. We did and as a result had a vegan dinner for us that first night as a result.