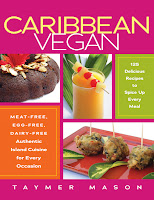 In my haste to finish my own cookbook, I've been pretty neglectful of my other cookbooks — cherished tomes that once dominated my weekly menu plan. Not only have I neglected the books I already have, I've also had to forgo buying any new cookbooks until after Christmas (that's when I'll be done with mine! Wooo!).

But I couldn't turn down an offer of a free copy of Caribbean Vegan to review. I've been a long-time fan of Taymer Mason's Vegan in the Sun blog, where the beautiful Barbadian blogs about veganized versions of traditional Caribbean eats. Her newly-released cookbook is filled with 125 recipes for native foods of Barbados, Saint Lucia, Trinidad, Tobago, Jamaica, Grenada, the French West Indies, and Guyana.

Seeing as how I'm totally unfamiliar with the foods from all those places, I was intrigued by the concept of Taymer's book. I've never had Carribean food and this book opens up a whole new world. Most dishes are seasoned with homemade wet or dry seasonings, such as Bajan seasoning, Jamaican jerk seasoning, or Trinidadian green seasoning. The recipes for these onion/pepper/herb-based seasonings these are included in the front of the book, and most keep for a year in the fridge. Many of the recipes also call for Scotch bonnet or habenero peppers. I love make-your-ears-burn spicy food, so this makes me very happy. But I bet spice-aphobes could leave the hot peppers out with tasty results.

I made the Bajan seasoning (a mixture of green and white onions, habenero peppers, lime, spices, herbs, and vinegar) to coat the tofu for this Hearts of Palm & Tofu Scramble: 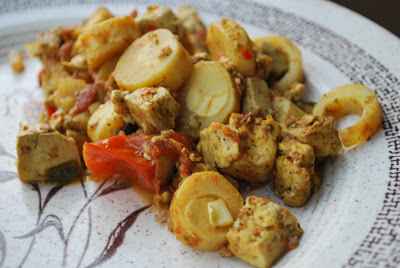 Since I'm still busy testing my main entrees and desserts, I only have time to try breakfasts from other people's books for now. But that was just fine because this super-duper flavorful scramble totally blew me away. The Bajan seasoning added so much depth to this dish. By far, the most flavorful scramble I've ever tried. And who would have thought to add hearts of palm? I love the crazy texture of those things!

I enjoyed my scramble this morning with another recipe from the breakfast section of Caribbean Vegan — Saint Lucian Bakes: 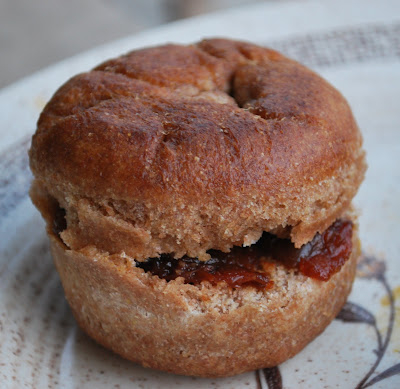 This was similar to an English muffin in that you fry the dough for a crispy outer crust, but despite the dishes' name, you never actually bake these. Just fry 'em on both sides until they're cooked through. Then you can slice 'em open and spread with whatever you please. I subbed whole wheat pastry flour for the all-purpose in the recipe and enjoyed the finished bake with tomato marmalade. The bread was so soft inside. Next time though, I'll likely double the recipe as this only made three Saint Lucian Bakes. I wish I had enough to last all week!

A few of Taymer's recipes do call for hard-to-find ingredients, such as ackee, breadfruit, and cassava, but she says that her testers from around the world didn't have much problem finding exotic ingredients at well-stocked markets. I figure our massive Winchester Farmer's Market in Memphis — actually a world food market, not a real farmer's market — will have these ingredients. But even if you live out in the sticks, you'll still find that most of Taymer's recipes call for easy-to-find American grocery store fare.

As soon as I wrap up my cookbook, I'll start working through my old (and plenty of new) cookbooks again. And Caribbean Vegan will be at the top of that list! Her Bajan Macaroni Pie with Tofu Cheddar is definitely next up.
Posted by Bianca at 11:31 PM

I really want to get that cookbook too! I visited the Caribbean a year ago and had a great time, although I wished I could have eaten more local food (not too much was vegetarian) so I really want to try making some at home now.. Glad to hear your positive review of it :)

That cookbook sounds like a great way to explore some new flavors. I love seeing Caribbean food beyond jerk!

i'd love to try that cookbook. when you move on to the next one, send that one to me ;) lol

Oh wow! All of that sounds so good! I love spicy food too! I need to check out that cookbook!

I really need to get my hands on that book. Taymer's food always looks so colorful and enticing!

I can't wait to get this cookbook out and test it on my island friends.

I really need to learn more about this region of food.. that cookbook sounds great!

That's another cookbook to add to my list! I have eaten very little Caribbean food, but from what I remember it was delicious. I'd love to add a new type of cuisine to my cooking repertoire.

This cookbook is fantastic! I recommend the split pea soup, Creole spaghetti, sauce chien, and especially the doubles!