The Good, the Bad, and the Raw

Another first Tuesday of the month, another raw food cleanse gone by. Today's uncooked eats were all courtesy of my favorite book, Ani's Raw Food Kitchen. The morning started with this bowl of Luscious Lemon Pudding with Fresh Strawberries: 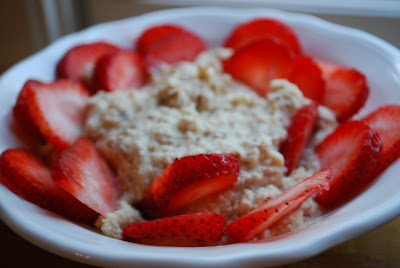 I'd wanted to make Ani's Fruit Parfait — raw nut-based pudding, fruit, and dehydrated buckwheat oat groats — since I borrowed my parents' dehydrator. But for some crazy reason, my Whole Foods doesn't carry raw buckwheat (at least not that I could find). Instead, I settled for this parfait sans buckwheat. Tasty, light, lemon-y, delicious.

Lunch wasn't quite as successful. I'm not sure what drove me to make the Japanese Miso-Shitake Soup since I'm kinda squeamish about exotic mushrooms (especially eaten raw!): 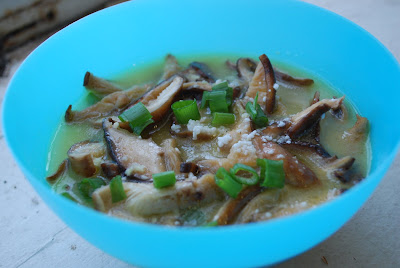 The mushrooms were too squishy and the soup broth contained WAY too much olive oil for my tastes (even after I cut the recommended amount in half). The whole bowl was just slimy. I ate about half before I couldn't take it anymore. Luckily, I had this Garden Salad with Sesame Sunflower Croutons as well: 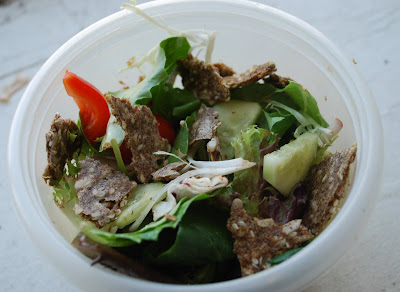 Before hitting the gym after work, I scarfed down a Fuji apple and an Apple Pie Larabar.

But the highlight of the day was this awesome dinner — Sun Burger on Sesame Sunflower Bread with Sun-dried Tomato Ketchup and Hot Mustard Sauce: 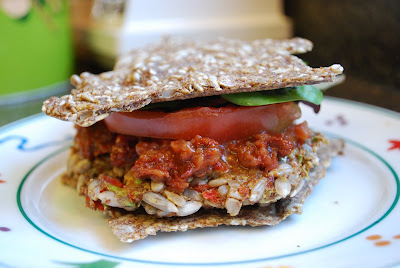 Since I had the dehydrator for awhile, I made the recipe that's been calling my name since I bought Ani's book. The "bread" is actually more of a flax sunflower seed cracker. Ani suggests dehydrating for less time to make it more pliable and bread-like, but she also said the more cracker-like "breads" keep for months in the fridge. So I made a big batch and dehydrated for extra time.

Here's what the Sun Burger looks like on its own: 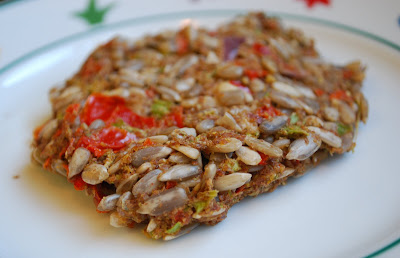 Lots of veggies, flax, and sunflower seeds. Yum! And these aren't dehydrated for as long as the bread so they have a softer texture. The "ketchup" and "mustard" really made this meal something special. I served the burger with a huge ass garden salad: 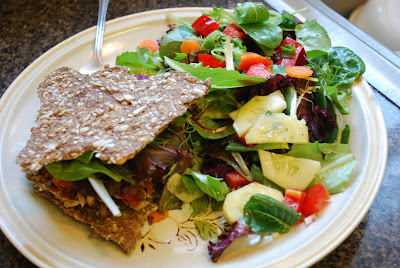 Four hours after dinner, I'm still satisfied. That's an amazing feat on raw day! Other than the icky soup, today's eats were some of my favorites over the year I've been doing this monthly cleanse.
Posted by Bianca at 9:36 PM

Your reviews are so helpful! I have this book but still have a lot of recipes to try. The burger looks delicious.

I felt the exact same way about the olive oil in the miso soup! I thought I was going to pass out from the fat (and I like fat, generally speaking). I'm excited to try out the lemon pudding now, though!

I finally ordered Ani's book, and your pics make me wish it was here already! Can't wait to try some of these recipes, especially that burger.

Dang, I'll have what you're having, minus any squishy shrooms!

No raw buckwheat? What kind of people are they? Lol. Everything you made looks so tasty and colourful and how awesome that your parents have a dehydrator. Slimy mushrooms are not good at all though.

I feel the same way about raw mushrooms. I've also learned to drastically reduce the amount of olive oil and salt that ani calls for, because I usually find it is way too much for my taste.

I really want to make the buckwheat crispies...I even bought the buckwheat...but don't have a dehydrator? So I'm not sure where I was going with that. I love her puddings too, the cashew is one of my favorites!

Oh, a dehydrator! How fun! Seems like its almost a requirement to eat raw these days. I love that burger, it looks so filling!

Oh, a dehydrator! How fun! Seems like its almost a requirement to eat raw these days. I love that burger, it looks so filling!

that burger looks great, makes me wish i had a dehydrator!!

Now that I eat more fats I'm thinking of making more recipes from that book. I love the pudding, it looks so delicious.

I've actually made the burgers before but was too afraid of the fat content so I didn't end up eating them, I think I'll make them soon though! YUM!

oh the 'shrooms! same here. there's just something about the texture, and a very, very bad experience in the past that makes me run screaming like a banshee when I see them.

Meghan at Making Love In the Kitchen said...

Your sunburger might be the highlight of my day too! I've been too busy working to make such amazing freshness lately.

Thanks for reviewing these! I want to make more things from that book. Your cleanse looks great - do you find you want more raw in general even on cooked days?

I really want to try the burger and flax bread recipes with a dehydrator! I made the burgers without one and it was kind of a disaster, but I could tell they would have been so delicious! Everything looks great :)

Looks great! Too bad about the soup.. I am pretty shocked at the amount of oil she uses in her soups.

Hey, if you want to test any of my raw recipes let me know..

Even if the soup was slimy, it looks good anyway!

The pudding and veggie burger look awesome though! I;ve been hearing SO much about that book, I should really check it out.

That burger looks awesome! I've been meaning to pick up that cookbook. You make the recipes look so amazing, I'm thinking of trying a few raw days a month too.

that burger looks perfect!! where did you get the recipe???

oooh, hooray for more raw awesomenesses! mmmmmmmm! your breakfast looks super yummers, and i think the texture of that soup would have really thrown me off as well. i dunno about raw mushrooms. hmmmm..... i'm glad dinner made up for the soup though! the burger looks awesome, and so does the "bun". i'm all about a big ass salad, too! yay!

That all looks amazing! Your raw food days just keep getting better and better. I love the burger.

OMG, this post couldn't get any better if you tried!

That burger looks especially amazing! But so does the strawberry breakfast. Great review!

Everything looks delicious, and that lemon pudding sounds especially enticing. Too bad about the miso soup, at least it looks pretty!

The sun-burger looks fantastic Bianca! Loved the soup too :) And good, bad and the raw...are you trying to say raw=ugly?? ;) Just kidding :)

The miso soup looks so good too! Too bad it didn't turn out right. The sun burger looks amazing too.

It's Bianca's raw food day!! The pudding looks positively dreamy. I like shiitake mushrooms but not when they're squishy! So I'll take one of those yummy sun burgers instead, please?