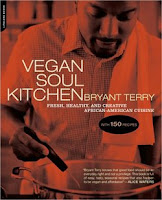 I'm not the only Memphis vegan specializing in Southern cuisine. Cookbook author and Bluff City native Bryant Terry has been cookin' up vegan soul food for much longer than I. He's the co-author of Grub: Ideas for an Urban Organic Kitchen and the just released cookbook, Vegan Soul Kitchen: Fresh, Healthy, and Creative African American Cuisine.

Bryant grew up in Memphis' Whitehaven neighborhood, but moved to New York City later in life. He's a huge inspiration for my cooking and his delicious dishes prove that Southern food doesn't have to be all about grease and fatback. I'm reviewing his latest cookbook for the Memphis Flyer, the alt-weekly newspaper I write for.

But you can't review a cookbook without making some of the recipes. Duh! Earlier this week, I made two of Bryant's favorites (both are located in the Top Six Good Eats section). This Cajun Creole Spiced Tempeh with Creamy Grits was out of this world good: 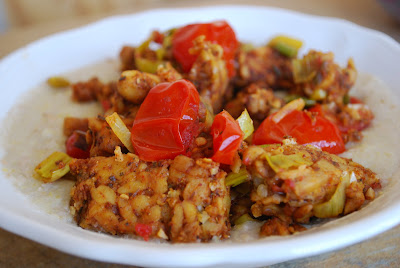 The dish is Bryant's take on traditional shrimp 'n' grits, a staple in the Deep South. The spiciness of the tempeh contrasts well with the creamy corn grits. And on the side, I cooked up his Citrus Collards Raisin Redux: 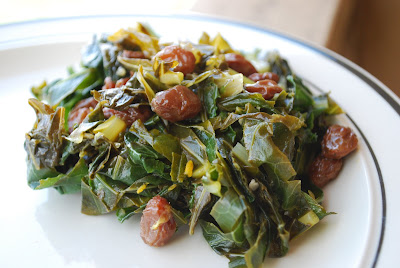 I didn't know it was possible to cook greens for a minimum amount of time and still manage to mask the bitterness. Down South, we typically cook our greens to death — at least an hour. They lose their bright green color, but they taste amazing. However, Bryant's method only takes about 15 minutes and they taste like heaven.

I'll be reviewing the book for the newspaper soon, so I'll post a link at that time. Until then, I'll be testing a few more of Bryant's dishes.
Posted by Bianca at 11:17 PM

ohhhh that looks like a book i am going to love! thanks for the heads up! i have thought about veganizing shrimp'n'grits for a long time, and i am glad somebody talented already did the work for me!

Ha ha, here in Germany we are also cooking or greens to death. At least when it comes to kale.
THat cookbook really sounds great, it includes so many recipes I never heard about before!

i need that book! i always cook my collards for about 2 hours but those look delicious!

Ohhh! That tempeh looks SO good! Guess I need this cookbook, too, hehe.

I just bought that cookbook the other day but haven't had the chance to give it a look yet. Looks good!

I've heard so much about that book - I'm dying to check it out!!

Comfort food at it's finest!

I *just* saw this book last weekend at the Borders near me, and I was super tempted to get it, but decided to wait....for what, I'm not sure. It sounds awesome though.

I never cook my greens for that long, I'm not patient enough.

I just got that cookbook and I've been totally digging it! You should make the Hoppin Jean, it's so yummy. I'll have to try the tempeh & grits thing, it totally caught my eye as something that looked yummy, but I'm trying to wait until tomatoes come back in season.

that tempeh and grits sounds amazing! Can't wait to read your review.

I bought that book a couple weeks ago, but I haven't made the time to do anything yet - I love his soundtrack picks for each meal...great idea! Both of your dishes look mouth-watering good...I'm especially excited about making those collard greens.

I want me some shrimp & grits right now! This sounds like a winner!

Yum! I just love collards so much! I rarely cook them for very long... but I didn't grow up in the south! hehe.. my mother would FREAK out if she did anything other than steam any green veggies and she'd made us drink the steaming liquid.

Amanda (The Fun Side of Veganism) said...

I also just made the cajun creole tempeh only with different toppings (photo on my blog), and holy crap it was fantastic!

I suppose I didn't read the intro very well, because I couldn't place the texture and taste of the tempeh. I kept saying 'somewhere between fish and chicken....'. Shrimp, of course. D'oh!

Anyway, it was a huge hit both days that I served it.

I haven't tried anything else yet, though.

YAY for new vegan cookbooks! Your pictures are gorgeous, you made the recipes look stellar! How fun that you get to write a review for your newspaper!

I've been debating on whether or not to buy that cookbook! Guess I need to now..

loved the baked BBQ blackeyed peas and the quiona-quiona cornbread, took the leftovers to my omnivore parents and they loved it also. Can't wait to try more of the recipes! His collard green recipe looked good -but I tried a coconut collard green recipe from Vegan Soulfood Guide to the Galaxy which was a total success

I have that book as well! Sounds like I should make what you made!

OMG I saw this in Borders the other day and WANTED WANTED WANTED it so very badly!! You know how some cookbooks you think are a good idea, but you look through and think " - meh - I don't know how many of these I'd make... "
Well, NOT THIS ONE!!!I seriously would make almost every recipe in there!! (Must be Southern at heart!!)

Thanks for introducing this to me! I have added it to my Amazon wish list...