My awesome dad turned 55 on Friday! When I asked what kind of cupcakes he'd like, he requested something low-fat (he's watching the calories) but with peanut butter and chocolate. Now, we all know peanut butter isn't low-fat, but he's cool with "good fat." He just wanted me to sub applesauce for oil in whatever I made.

So I used the opportunity to make a lower fat version of the Peanut Butter Cupcakes from Vegan Cupcakes Take Over the World: 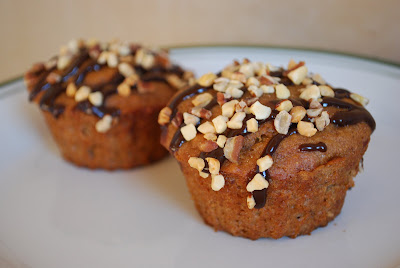 I used 1/3 cup applesauce in place of the 1/3 cup oil. I also subbed almond milk for the soymilk because that's what I had on hand. And I learned a valuable lesson — you cannot make faux buttermilk by adding vinegar to almond milk. Unlike with soymilk, the almond milk gets chunky and gross. I had to throw my measured almond milk with vinegar out and pour another cup full sans the vinegar.

Here's my dad, decked out in his Harley hat and tee, blowing out his two birthday candles (there's no way I could fit 55 in there!): 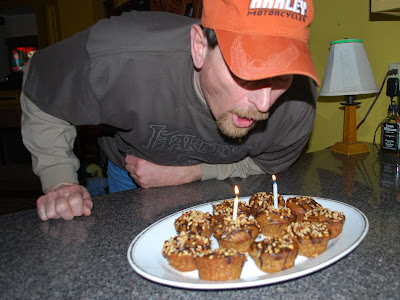 And my mom (also sporting her bling-bling Harley belt ... though she's scared to actually get on a motorcycle) enjoyed a cupcake too: 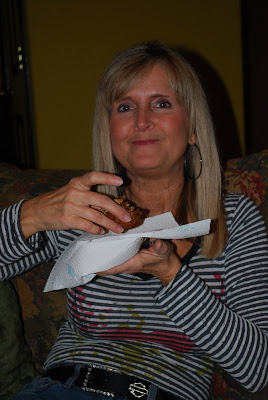 For dinner, we went to Cozymel's, a Mexican chain restaurant that makes fresh guacamole at the table. They don't have any totally vegan dishes on the menu, but I ordered the Lettuce Wrap Vegetable Fajitas without cheese. So, so good. Sorry I didn't take pictures there.

Happy birthday, daddy! And yes, he reads the blog.
Posted by Bianca at 10:13 PM

awww what a good daughter! dads are wonderful :)

Dad looks great for 55! Glad you had a fun celebration. Mmmmm...guac!

Happy birthday to your dad! What a great daughter you are to make such delicious cupcakes. And your mom looks so sweet, I love the belt.

happy birthday to him! the cupcakes look rad.

Happy Birthday to your dad! How nice of you to make him cupcakes.

Happy birthday to your dad! That's so cool that he reads your blog - and those cupcakes look deeeeeelish!

HAPPY BELATED BIRTHDAY TO YOUR DAD!!! My 21st birthday is today :-)

Happy Birthday to your dad! It's nice that you made him cupcakes. I bet they were delicious (anything with peanut butter is always delicious)

Belated b'day wishes to your dad :) Very nice of you to bake him cupcakes Bianca! Those look delish!

Glad the cupcakes worked out...I will have to try that recipe! Your so sweet to make something for him =)

Ok and your parents look SO YOUNG! I would have never guess 55 for your Dad!

Aw, that was so sweet! Your Dad does NOT look 55! They both look so young! Maybe it's all the vegan food you give 'em :D

happy birthday to your dad, Bianca! that's so awesome of you to make him some healthier peanut butter cuppies! your cuppies always look amazing - and these look gloriously good! your parents are just too cute, Bianca! i'm glad you guys had fun celebrating birthday awesomeness! hooray!

Wow, your dad does not look anywhere near 55!
I just made those cupcakes too! Except in cake form. I loved them! You're such a good daughter!

awww, did the cupcakes turn out good substituting applesauce for the oil? i haven't tried that for any of those recipes. happy belated birthday to your dad!

So cute, those cupcakes look amazing! And your parents are so young and hip-looking!

Happy Birthday Bianca's dad! You are the most fun (funnest?) person (people!) I've ever helped someone move with.

Awwww, your parents are so cute! And those cupcakes look delicious.

So they turned out great! They look delicious... ;) Happy belated birthday to your dad!

Happy Birthday, Bianca's Dad! I must say, your parents both look pretty young for their age! You have some good genes, girl! :)

yum on the cupcakes! I always forget I can sub applesauce for oil! think that would work ok for Isa's chocolate cupcake recipe which is posted on chowhound?

Your parents are so youthful! A fun family:-)

My Dad turned 55 this week as well! I also made cupcakes, woo!

Happy birthday Bianca's dad!! What a lucky birthday boy, your cupcakes look so scrummilicious! You can't go wrong with chocolate and peanut butter. Thanks for the almond milk/vinegar tip, I did not know that!

...please where can I buy a unicorn?

It is best to participate in a contest for among the best blogs on the web. I'll recommend this website!